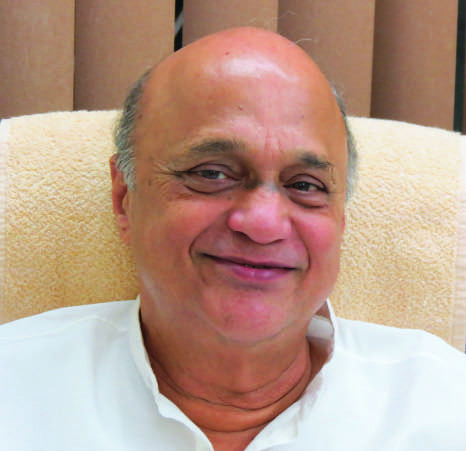 A magical life
Sri Abhaykumar Sardar, an enlightened master and the founder of Gurutatwa Yoga Centre in Pune, believes that Gurutatwa is the guiding element that guides everyone through the five elements, all living beings, microbes, and flora and fauna. He shares his spiritual journey and experiences that led him to attain mastery over himself.

As a child, I was an introvert and spent most of my time close to nature. I enjoyed painting and spent hours pursuing this interest. During my college days and early professional life, miraculous events, which I could not comprehend, happened.

My wishes used to get fulfilled through completely unknown people. A local train was stopped for me to board it. An unknown person reserved a seat for me in a packed train. When I used to keep awake at night thinking about pain, suffering, and events happening around me, I witnessed sparks of energy and light dancing around me wherein my existence used to get dissolved. Sometimes, I used to get sucked into a black hole or even wander through forests with energy-filled trees, birds, and mountains, and travel through space. These experiences were frightening as I could not understand them, and I was not ready to accept the existence of any supernatural power as I was an atheist.

Awakening of energy on Ganesh Chaturthi
While it is true that I had no faith in the Almighty or God, I still used to do puja (worship) because of my mother and grandmother. During one such puja on Ganesh Chaturthi of 1972, the recitation of mantras commenced. The idol of Ganesha was placed in its position, and suddenly, I felt as if a massive electrical current was passing through my body. The current was increasing. My blood was flowing forcefully. I felt as if I was expanding, my entire body was being energised, and my skin was having some strange sensation. I was going into a trance.

My thoughts started to recede. Eventually, only that supercharged condition remained—a feeling of being energised, of overflowing bliss. The priest said, “Abhay! Where is your mind? Are you unwell today? Why is your face so red?” I did not say anything. Our Ganesha idol was immersed after the typical one and a half days of festivity. But my supercharged condition receded only after three days.

Meeting with Balasaheb Pradhan
My uncle said, “Abhay, I feel that this experience of yours is spiritual, from the path of yoga. Let us go to Balasaheb. He will be able to guide you regarding this.”

According to the yoga tradition, Balasaheb was called Swami Krishna Saraswati Yogiraj. He was a very advanced yogi and many great souls and yogis were very respectful to him. We immediately went to him.

Balasaheb directed his gaze straight into my eyes, the way it is done during the practice of Trataka. I also stared back steadily at him. At that very moment, blue sparks emerged from his eyes and entered mine. Its impact was so powerful that even though I was supercharged with energy, I leaned backwards and then became steady again.

When I came to my senses due to his loud laughter, Balasaheb said, “You call yourself an atheist! Now you have no other option but to steadily move on the path of yoga. Your development is immense. I can’t tell when and how your Kundalini awakened. But it is trying to reach the thousand-petal lotus (Sahasradal) in your head now. That primordial power has caught hold of you. You are surrounded, captured by that power. Now you have no other option but to surrender to that power, to Shiva, to Sadguru. I am not your guru. Your guru will come at the appropriate time. He will show you your true nature. He will give you guidance right at your home. Surrender to your family deity who will guide you. Start with spiritual practice. Recite Aum or So-Hum. We (all yogis) bless you and stand by you.”

This whole thing was new to me. I understood nothing from this path. I had no faith in the Almighty Himself. So how do the primordial power, Shiva, etc. have any place in my life? I considered all this as humbug—just mind games. How could I enter this path? I decided not to enter this path and continued my routine activities.

Going to Mangeshi (family deity, located in Goa)
Ever since we got married, Aruna, my wife, used to insist that we should go to Goa, to visit Mangeshi. In our Goud Saraswat Brahmin clan, it is a tradition to visit Mangeshi immediately after marriage. I said, “OK, let’s go. But on one condition. You tell that Mangeshi of yours that if you want this ‘devotee’ of yours to come to meet you in Goa, then he will come only in his own car, even if it is second-hand.”

That evening itself, an acquaintance came to my place and said, “Please purchase my vehicle. Take this key. You can pay whenever you want.” But even finance was arranged immediately and the Standard Herald Super Ten car made in England became mine. That night, I remembered what I had promised to Aruna. I said to her that I have made a promise to that Almighty Mangeshi who I know doesn’t exist. But I stand by a promise made even in my dreams. So, we will now go to Goa in our own car to fulfil the promise made to that non-existent Mangeshi.

The experience of peace in the Mangeshi Temple
I don’t know why but everything appeared so familiar when we reached Mangeshi temple. Actually, it was the first time I had visited Goa and the Mangeshi Temple. Despite that, I gave information about this place to Aruna and showed her some notable landmarks. When that idol was being worshipped, I was experiencing that it is happening to me. I was experiencing immense peace. My existence itself was none other than peace. The entire ritual, Abhishek, Prasad, everything, imparted immense peace and contentment.

Mangeshi’s  reassuring guidance
I did go to Mangeshi. But I lost my own existence on the way back. Till then, I had lived as an atheist, full of ego, in my own way, immersed in thoughts, imaginations, and emotions. Now I lost all that. My mind had received a massive shock. Why did everything there seem so familiar? How did an atheist like me know the specific details of ritualistic puja? Why did I feel as if I was being worshipped when the idol was being worshipped? How did I experience that unfathomable peace that I had never experienced before? Does something called Mangeshi, some Almighty, some God called Shiva really exist? While the Almighty really existed, had I been cheating myself by being under the impression that I was an atheist? I was shaken to my very core. Not only that; it was as if my entire existence was shattered.

I went into a trance. Before I realised it, immense peace engulfed me. And a soothing, loving, reassuring voice came from everywhere, from within, from outside, from the entire existence that I knew and didn’t know: “Abhay, why are you craving? Why are you causing pain to yourself? I am here with you. I am very close to you. You will see me wherever you look. I will guide you from wherever you expect. But just look for me beyond the play of manifestation. You don’t need to go back to Goa.” Then again came that unfathomable peace that engulfed the entire existence.  I came to my senses. My craving was over. That striving was over. Just peace . . . peace. It was as if I was reborn by the Grace of Maharaj (the Almighty).

Prayers to Maharaj
I decided that I would follow the instructions given by Balasaheb, the practice of reciting Aum, the path of yoga, meditation, and samadhi, and find that ultimate truth that I had been searching for so far in one way or another.

One had to say prayers before starting the spiritual practice. But Balasaheb hadn’t taught me anything. He had said that the family deity would guide me.

Then I said to Maharaj, “Maharaj, I don’t belong to this place. I didn’t even want to tread this path. Since you have pulled me into this, please guide me as to how I should pray to you.” At that very moment, Maharaj gave me the prayer, He made me recite it—the prayer of the experience of non-duality: I have no existence independent of Him. He has no existence independent of me. There is no feeling of separation.

And yet, that day, Oneness was still not there. If that Oneness was attained, no separation would remain, and neither would Oneness remain.

Visions while chanting Aum
While reciting Aum, I used to have visions of many great souls—Gautama Buddha, Jesus Christ, Mahavir, Zoroaster as well as Hindu, Muslim, Christian, Jain, and Buddhist saints, sages and yogis.

I wanted to know the ultimate reality. I wanted a first-hand experience of that. I thought all these visions were mind games, although my friend thought they were real. He used to say that such visions are experienced when one progresses on the path of yoga, meditation, and samadhi. I felt that it would certainly obstruct the experiencing of the ultimate reality.

I prayed to all those great souls and said, “I want nothing from you. I expect nothing. I don’t expect a vision of even the Almighty. Then why this wasteful game? This can’t be your true nature as it changes in every birth. So bless me with a vision of that true nature that doesn’t change from birth to birth.

I came to my senses. The peace spread throughout the universe. It went through and through me and was still left over. It doesn’t end even when this entire play goes on. It has no beginning either. It is as it is. It is where it is. It upholds the entire universe. And after upholding the whole universe it is still left over. It is the fraction of a moment which never ends. It’s an unending, live, unbroken, direct, first-hand experience.

With all these experiences, everyone wonders who my guru is. Who has been guiding me all through my journey in the absence of a human guru? It is nothing else but ‘Gurutatwa’ which guides everyone through all living, non-living things. Now I am in unison with Gurutatwa all throughout. The only wish I have is that everyone understands this, gets guidance from Gurutatwa, and achieves a balanced, harmonious, and blissful life.