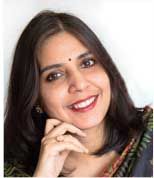 Spirituality has brought Shivi Verma to the conviction that our imagination can manifest as reality if we believed strongly in it.

Right since my childhood, I was never too enamoured by the world as I saw it.

I found humans and daily life boring and mostly sought refuge in nature or books. I would get bored with childhood games quickly and did not find watching movies very entertaining. Even while watching television, I used to sit with a book in my hands and preferred to wander in my fictional world made up of perfect and ideal people rather than focus on teleserials. The good and the bad were clearly separated in books, making it easy for me understand the world described in them. But whenever I would try to look for their resemblance in daily life, I would get confused. People seemed an odd mix of good and evil, making it difficult for me to relate to them. Whenever I would express my confusion to my mother, she would tell me to learn to separate the world of fiction from that of reality and not expect ordinary people to mirror fictional characters.

I would find this suggestion quite difficult to implement because I never considered stories as stories. For me, they were real people with real feelings, thoughts, and situations. And they were so beautiful. Their feelings were strong, clear, and honest; their thoughts, transparent and sensible, and they always chose virtue and goodness over temptations and vices. To me, they were simple, relatable, and easy to understand, unlike real people around me. But I was considered weird by others for my impractical beliefs and often made fun of for being different from others. I remember, once in my childhood, while playing with a bunch of cousins, I had sat on a boundary wall overlooking a pond with ducks paddling in it. While others had left after a short while, I had continued to gaze at the ducks for almost an hour, only to return to a house laughing uproariously at my weird behaviour. I couldn’t for the life of me understand what wrong I had done? Forced by strong rebukes for my lack of involvement in the normal world, I would try hard to show interest in people and their talks to get their approval. But that too did not work out. I would often goof up on social niceties and end up saying things that offended people.

Fortunately, spirituality came to my rescue and bailed me out of my awkwardness in the nick of time. It showed me a path that was closest to my heart and my identity. I no longer felt the need to justify my ‘oddness’ to others. But the best part was that spirituality made me more grounded and practical, without eliminating my beautiful fairy world from my life. I began to feel a strong connection with powers beyond my ken and often felt guided and motivated by them. I had many otherworldly experiences that were much stronger than any of my human experiences. Not only that, my imaginary world became more and more real for me as I purged my inner self of all impurities. I began to come across people who were honest, pure, gentle, sincere, kind, and good-hearted with not a trace of selfishness or meanness in them. The purity of their heart touched me. I was impressed by their integrity and scrupulousness.

My experience has taught me that all that one imagines is true and can be realised if one powered them with enough thought and intention. It’s up to you what you decide to manifest.