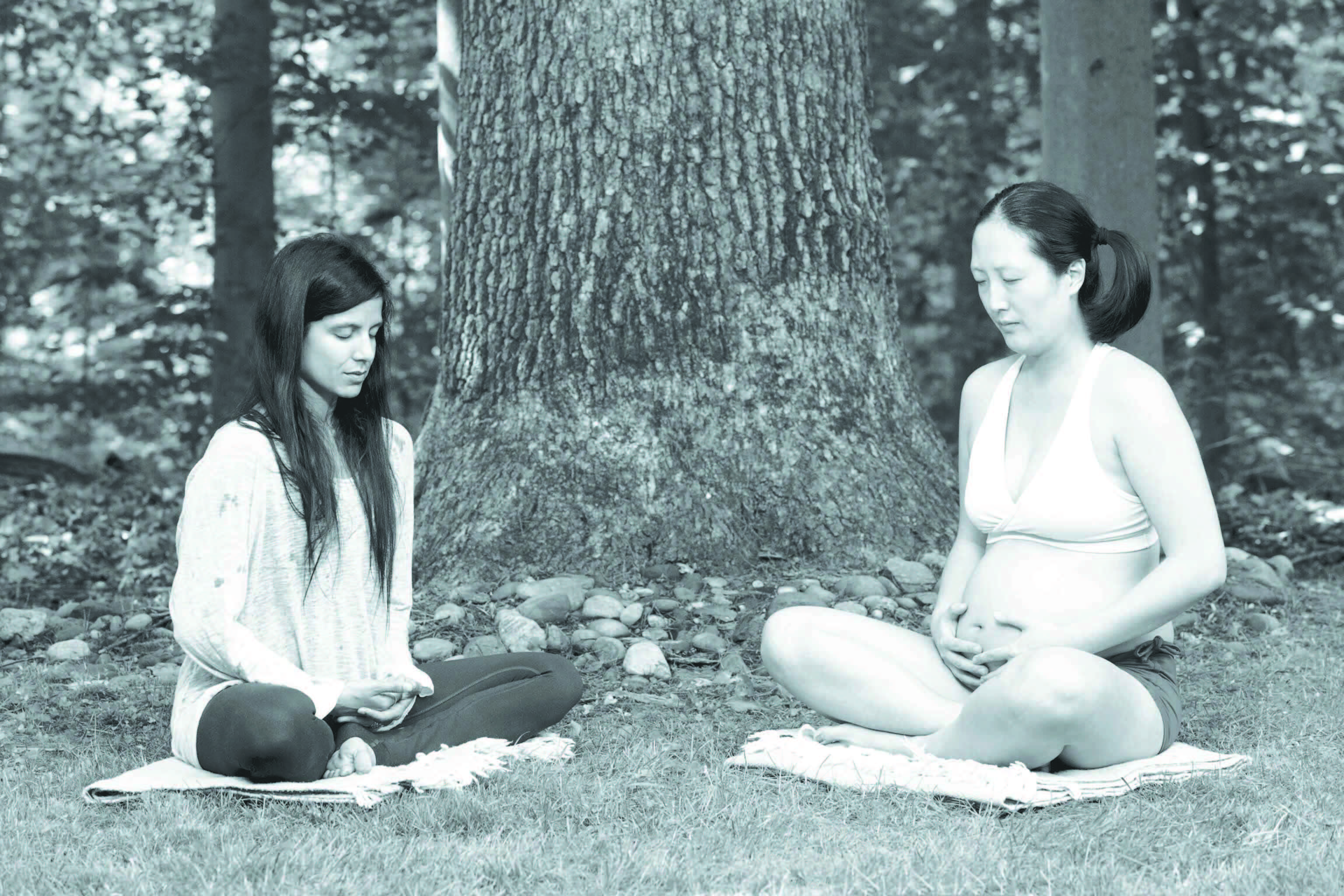 A spiritual haven by the sea

Sharmila Desai, India’s only certified female Ashtanga yoga teacher, talks to Melissa Nazareth about her plans to teach yoga and create a biodynamic garden in Goa.

On the pristine shores of Goa, flanked by tall, green palm trees, lies a quaint, little village, home to numerous spiritual communities. Morjim village is a spiritual retreat with its never-ending natural surroundings, heritage temples and historic chapels. The locals coexist with a variety of birds as well as the endangered Olive Ridley sea turtles that inhabit the coast.

Nestled under these coconut palms, on ancestral land of five generations, is Ashtanga Yoga Morjim, a sanctuary, paying homage to a life of harmony with simplicity, nature, and heritage. Sharmila Desai, a certified Ashtanga yoga teacher, moved here in September this year, with a dream to make Ashtanga yoga a way of life for all.

Though Sharmila was exposed to different forms of Hatha yoga as a devotional healing system, through her mother and grandmother, she was first introduced to Ashtanga yoga by Shri K. Pattabhi Jois and R. Sharath Jois in 1997. Even today, she makes yearly pilgrimages to Mysore, cherishing her time as a student at the K. Pattabhi Jois Ashtanga Yoga Institute, and is one of few people worldwide to be certified by the institute to teach the form. “I was born in London and lived in New York, Japan, Hong Kong, and India,” says Sharmila. “My brothers and I had a very international upbringing but would always spend our summers in India. When I lived with my grandmother in Mumbai, she would get up around 3am and begin her prayers. I would drift in and out of sleep, smelling the sweet aroma of burning incense and hearing her melodiously chanting mantras. I also witnessed her practising simple yoga asanas as part of her daily ritual. Yoga, as a part of life and an offering, became part of how I understood the world.” Sharmila further shares how, when she and her siblings got ill, their mother, in addition to consulting a homeopathic doctor, would take them to a yoga therapist who would advise specific restorative asanas to help in the healing process.

Speaking of what inspired her to move from New York (where she lived for 20 years on and off) to India, Sharmila says, “Growing up with my grandparents in Goa, the simplicity of village life and raw nature left a lasting impression on me. At the back of my mind, I always wanted to return and live amidst the vivid greenery. Now, the peacocks, monkeys, wild birds, cows and water buffalos I cherished as a child are part of my children’s everyday life. When I was pregnant, I thought about how I wanted to give birth in water and at home, and then, as the children started growing up, I asked myself how I wanted to raise them. Returning to Goa seemed ideal to fulfil my vision of raising my kids in nature, rooted in a strong sense of family.”

Sharmila has been encouraging her children—Asha, 10, and Arjun, eight—to join her when she practises yoga, since they were toddlers, but she has never pushed them. “As their muscles and limbs are still growing and their intellect is developing, it is important to expose them to the discipline of yoga but not push them in any way,” she says. In tune with Sharmila’s beliefs, Ashtanga Yoga Morjim welcomes practitioners of all stages of life and practice, including families, families to be, young, elderly, beginners and those further along.

Building the shala from scratch

Building the Ashtanga Yoga Morjim shala (school) was hard work with a steep learning curve for Sharmila and her team. “As the land was covered in vines and thorns and had been lying low for years, we had to weed it, level the terrain and mark the layout with rice flour to position the structure according to Vastu, while not displacing the coconut trees,” she says. “When clearing the land, we re-discovered a several-hundred-year-old banyan tree that I remember playing under, many years ago. You pass it on the path to the shala and its vastness brings focus to the area. My father too played at the base of that tree when he was a child.  And now my children ride their bikes and play with our dogs under it.”

A traditional Mysore style shala means that students come in the early morning and practice. Each person practices what has been individually prescribed at their own pace in accordance with their breath. New students are taught one- on- one in the beginning, until they have the capacity to join others. They are also encouraged to first watch a class so that they understand how Mysore style Ashtanga yoga works. “I try to impart the traditional form unchanged, as taught by Guruji, Sharathji and Saraswatiji (daughter of Shri K. Pattabhi Jois), respecting the silence, honesty, and self-effort that the Mysore-style method inculcates,” says Sharmila.

Co-author of Yoga Sadhana for Mothers—the first book on Ashtanga Yoga, pregnancy, birth and motherhood—Sharmila believes that her writings and teachings come through daily devotion and direct transmission from guru (teacher) to shishya (student) over many years. “Becoming a mother has had a profound effect on how I understand and teach yoga,” she says. “Surrendering the strength that I cultivated over many years while giving birth, and then building it up again with many challenges, twice over, made me compassionate, patient and resilient. It also hastened my understanding that sadhana (practice) should divinize all our thoughts and actions during the day and not just for a few hours. I try to communicate that underlying philosophical principle of spiritual practice being pervasive, when working with others.”

Sharmila is also working on a biodynamic garden and says that it has taken them three monsoons to develop a lush, green garden around the shala, with flowering plants, medicinal herbs like neem, tulsi, aloe, lemongrass, and turmeric, and locally indigenous trees. “We worked with Amey from the Agriculture Department of Goa from the beginning, to study which trees will grow well in Morjim’s native ecology. Recently, Yogita from Green Essentials, kindly sat down with me to map out what an edible garden would look like over the seasons in Goa. Our goal is to grow lots of organic food in our garden.” Sometimes, students also help around the garden after class on Sundays, which makes Sharmila really happy to be able to offer them an opportunity to connect with the earth. “Building the shala and creating a sustainable garden, much like cultivating a yoga practice, affirmed to me that there are no short cuts in a process,” says Sharmila, adding that slowing down is essential to allow for transformation and something magical to sprout. In the past too, Sharmila ran a community garden at her children's school in New York. Believing in the importance of seva as part of spiritual practice, she has been teaching at yoga therapy workshops internationally and now hopes to share her knowledge from her personal space— the Morjim sanctuary—as well. Sharmila confirms that there are a number of workshops lined up for this year and early next year, during which time she will tour and teach worldwide. “I am honouring my teaching commitments in the UK, Canada and South America next year, but my vision is really to live and teach in Morjim full-time,” she says. “It is such a uniquely beautiful environment with the village, temples, and ocean, plus the natural environment supports a journey into yoga.”

If you’re looking for a rejuvenating getaway, head to Goa and enjoy a revitalising experience at Sharmila’s spiritual haven.

Images supplied by Sharmila Desai (instead of sharing individual credit for her many photographers, she doesn’t mind using a common credit)