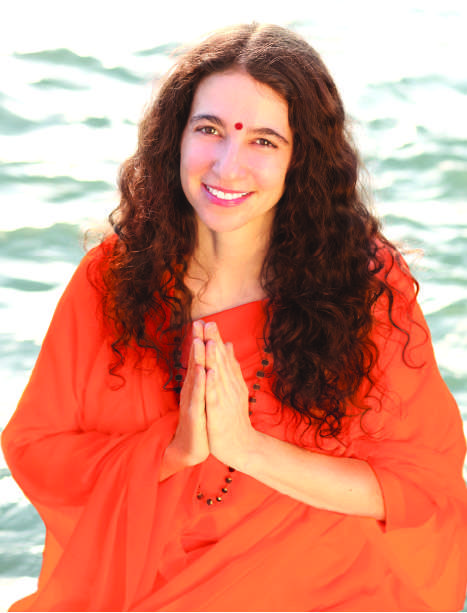 Awakening on the banks of Mother Ganga

Awakening on the banks of Mother Ganga
Sadhvi Bhagawati Saraswati was raised in an American family in Hollywood, California, and graduated from Stanford University. She was completing her PhD when she left America to live at Parmarth Niketan in Rishikesh, India. She has been living there for 22 years, engaged in spiritual practice and service. Below is the account of her mystical experiences that changed the course of her life after she landed in India in 1996

People come to India to find God and discover themselves. They yearn and dream of a trip to the Himalayas where sages, saints, and rishis sit in caves and meditate, gifting the lucky with a glimpse of their form and the even luckier with a teaching or blessing. Seekers save their money, pore over books and maps, and visualise themselves sitting at the feet of yogis to attain enlightenment.

I came because I liked the food.

I didn’t know anything about India other than that I loved the food. As a strict vegetarian since the age of fifteen, Indian restaurants were always my first choice in new and foreign cities. At Indian restaurants, I didn’t have to grill waiters and chefs in languages I didn’t speak, about the contents of their broth, seasoning, stock, and sauces. Indians understand vegetarianism. There is never chicken stock, beef bouillon cubes, or oyster sauce hiding in soups or stews and no eggs in pasta or bread.

But there was an Indian restaurant on our corner. So why go to India?

To India with an open heart
In the twenty-five years of my life, from 1971 to 1996, I had been many things, but I was not an aimless wanderer. All the travel I had done was purposeful. But here I was, on a plane headed to New Delhi, a city I knew teemed with lepers, beggars, mosquitoes, and far too many people.

It made no sense.

I agreed and vowed to keep my heart open.

Mother Ganga
Our first morning in Delhi, we sat in a restaurant overlooking Connaught Place. I pulled out the Lonely Planet guide and flipped through the pages. “Let’s go to Rishikesh,” I said. “It seems nice. It’s only a few hours from Delhi, and they have a lot of yoga programmes. It’s on a river and right at the base of the mountains. So we can go to the mountains too.”

After a few days of sightseeing in Delhi, we headed to Rishikesh.

“How do you get back to the river?” I asked the clerk after we had checked in and dropped our backpacks in the room. The Ganges called me. As we walked across Ram Jhula (a bridge across the Ganga), our luggage strapped to our backs, the river flowed quickly and deeply below.

The hotel clerk directed me down a narrow alley that ran in front of the hotel, between two large ashrams, until it dead-ended at a small road lined with tea stalls on the banks of the river. After walking upstream a few hundred feet, I found marbled steps leading down to the river bank. Pilgrims gathered on the lowest steps, pouring water over their heads from small brass pots or grasping tightly onto chains while they dipped themselves, once, twice, thrice in the rushing river.  Parents held their naked children close to their chests, scooped up water, and let it drip gently through their fingers over their children’s bodies. Rubbing the holy water into their own and their children’s heads, backs, stomachs and legs, they chanted “Jai Gange!” “Jai Gange!” and the children squealed.

As I walked down the marble steps to the river, I eyed a spot slightly downstream, far enough from the bathers to protect me from their splashing children.

Ganga grants a vision
I wasn’t expecting spiritual awakening, but it happened, before my toes even touched the water. I stood, staring at the flowing water, staring at the dark green mountains on the opposite bank. And then it happened. An experience that twenty-three years later I still struggle to articulate. From the landscape of river, mountains, steps, and bathers came an image of the Divine. Woven into and out of the threads of my visual field, occupying every frame of perception, out of the colours and shapes and hues and textures of the world I had been watching, came a divine form, an image of divinity that blended into and yet stayed distinct from the background.

The next thing I knew, I was sitting on the steps without remembering how I went from standing to sitting. I was sobbing, breathless, yet with no experience of either the sadness or happiness that typically accompanies tears. The tears were not foreign or external, not due to some effect or impact. Rather, they were myself flowing out of myself as the waters of the Ganga flowed by my feet. Waves of water outside and waves inside.

Tears of ecstasy
The image of the Goddess Ganga formed from every colour, every shape, every texture, and every aspect of my visual spectrum. Here She was. And here I was. Yet it wasn’t really a Her, rather it was an All, an Everything. And I, I was part of that Everything. There was nowhere I ended and All began. Nowhere She wasn’t.  I stared, eyes open, into Her form over the flowing river. I had come home.

I sat on the cool marble steps crying into the river. They were tears without thought—not the type I usually cried. These tears were not connected to any idea, any memory, or anything someone had done or said. They were simply tears of being in the presence of truth.

Minutes, hours, days, and lifetimes passed while I sat beside Ganga’s flowing waters. My mind had become non-verbal. The only thought which arose periodically was “Oh my God.” It came, not so much as an intellectual thought but rather as an outburst. “Oh my God, it is amazing. Oh my God, it is so beautiful.”

Whatever I saw, I cried. A child, tears. A mother, tears. A marble pillar, tears. Each varying background was just the canvass—the undulating canvass of colour and energy upon which the Divine was painted.

Someone came over and tried to talk to me, but all my senses and awareness and knowledge had dissolved like salt dolls into the watery soup of my consciousness. I was unable to tease apart the various ingredients from the rest of the soup. Words? Blended into the soup, unable to be extricated. I looked at him and cried as I smiled. Tears poured out of my eyes, onto my clothes, and the marble steps upon which I sat.

A new path
The next days ran into each other, timelessly. Rushing at the first light of day, down to the river worshipped as the Mother, being pulled at night back into the green-hued sparse hotel room with flickering blue tube lights, days of meditating on the banks of the river. I would not, however, have used the word ‘meditating’ for I had no semantic framework into which to put any of this.

One afternoon, as I walked up the steps from the Ganga toward our hotel, I discovered an alternative route. Rather than walk downriver to the alley, I could walk through an ashram just in front of the marble steps with the words ‘Parmarth Niketan’ written in bold above the gate. The ashram’s central pathway ran parallel to the alleyway and was much cleaner. It was sparkling clean. Enormous blue statues of Shiva and Krishna filled the pathways. Out of a huge Shiva statue, a fountain of water flowed from the Goddess Ganga poised above Shiva’s matted head. Lush gardens with multicoloured flowers lined the central pathway, broken only by numerous life-size depictions of scenes from the Hindu scriptures.

The ashram became my pathway between the hotel and the banks of the Ganga, a passage I took several times a day, as I rushed out of the hotel early morning but inevitably had to return to use the restroom at least a few times before the darkness after sunset.

Guiding voice
As I walked through the ashram one day, I heard a voice. A clear, stable voice. A man’s voice. It said, “You must stay here.” I looked behind me to see who had spoken. The pathway was empty. I looked up. Perhaps from one of the balconies above me, someone had spoken. There was no one, and the balconies were far enough back from the central gardens that it would have had to be a shout, not a gentle voice, in order for me to hear.  No one had spoken.

If there was no one around, there couldn’t have been a voice, I reasoned. I must have simply imagined it. I kept walking. About thirty seconds later, I heard it again. It was a soft, natural, calm male voice, as though spoken by a gentleman in the seat next to me on a plane or train. “You must stay here.” Again, I turned around to see who it was. The pathway was still empty.

Meditative though I had become, I was sure that I hadn’t lost my common sense.  Clearly, if there was a voice, there should be a speaker. If there was no speaker, there was no voice.  In my twenty-five years, the only people I knew who heard voices were schizophrenics and Joan of Arc. My experiences since I laid eyes on the Ganga were expansive and whole, not the contracted fragmentation of schizophrenia. I had not become delusional. Yet, if I wasn’t delusional and I wasn’t Joan of Arc, then who had spoken? No one had spoken, as no one was there. Obviously, I could not have heard a voice.

As I was just about to ignore the voice for a second time, I heard another voice. This time it was recognizably my own.

My internal reproach continued. “So, if you are going to pretend that you did not hear a voice then you must get yourself back to Delhi and get on a flight home to San Francisco. You cannot break your own vow.”

I was definitely not in the mood to navigate a return trip to Delhi nor to leave India so quickly. Along with the ecstasy, I had also been fighting a cold and drinking copious amounts of mango juice from boxes with Frooti written on them. To deal with travel back to Delhi, in this state, was not going to be fun. I had, therefore, only one choice. Conceding to my own ultimatum, I walked off the central pathway and onto a smaller pathway of the ashram, toward the large hanging sign with ‘OFFICE’ painted in English upon it.

And thus began my life at Parmarth Niketan, at the holy feet of Pujya Swami Chidanand Saraswatiji.