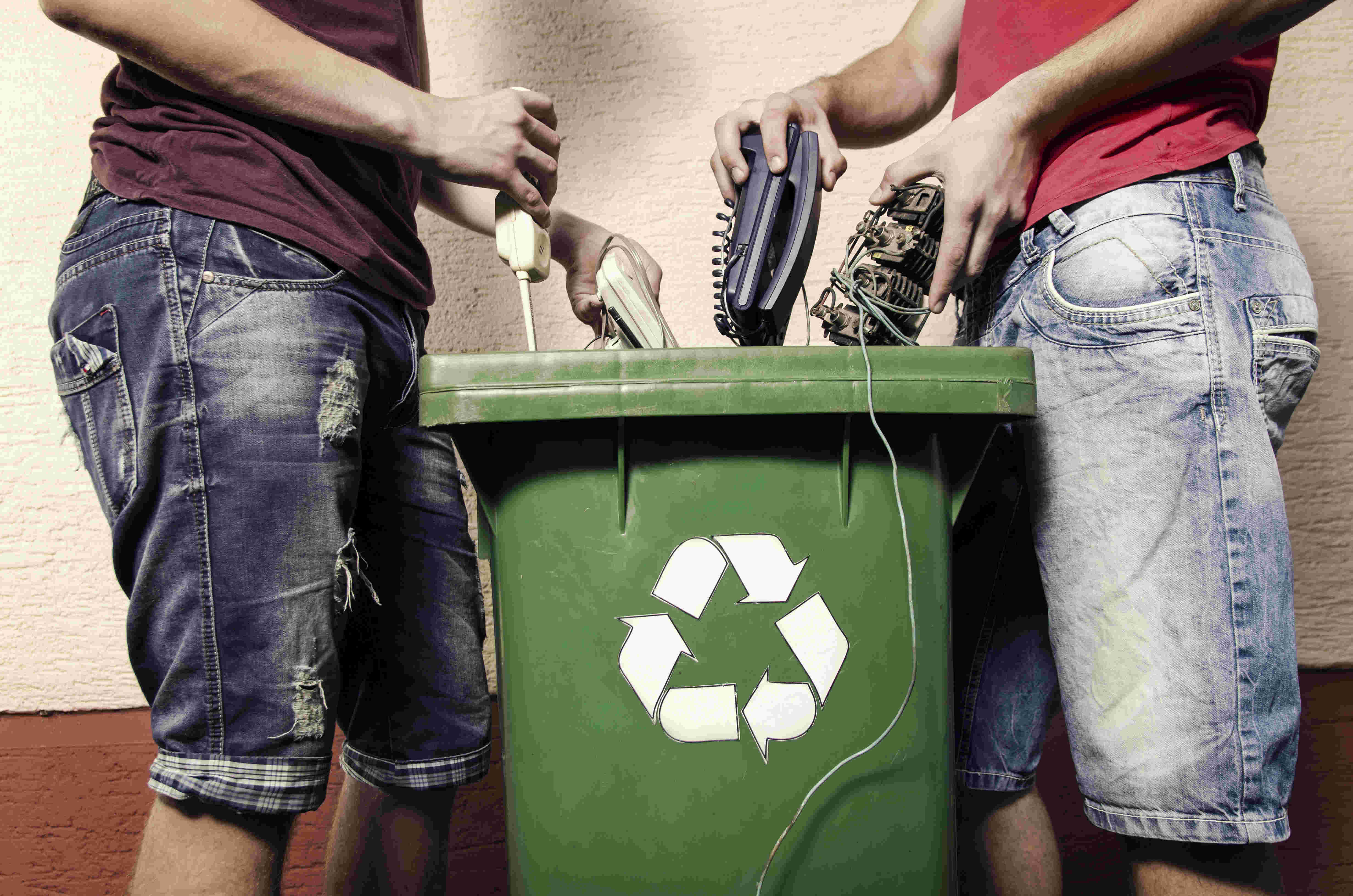 Be an e-waste manager

E-waste is veritably the Pandora’s box of the 21st century. We are happily poisoning the soil and air with the sleek and stylish gadgets at our fingertips. Anuradha Sahu sheds light on the urgent need for proper e-waste management

“All my friends in school have the latest iPhone, mum. I too will need one. It’s a requirement,” said Ria, my neighbour’s teenage daughter. “But your latest smartphone is just a year old, isn’t it? Why do you need to change it so soon?” her mother grimaced.

Almost every modern household is privy to a similar scene, given the advancement and penetration of technology in every sphere of our lives. We live in a consumer-driven society that is constantly buying, upgrading, and replacing current technology. There is always a newer and fresher alternative to that old phone, computer, or camera. In fact, the whole category of old electronic items contributes to e-waste, with VCRs being replaced by DVD players, and they, in turn, being replaced by Blu-ray players, and so on. The major contributors to e-waste are computers, televisions, monitors, cell phones, PDAs, VCRs, CD players, batteries, cassettes, fax machines, printers, and refrigerators.

Everyone prefers to have things at one’s fingertips. Lifestyles and general attitudes have undergone a sea change over the years. Consequently, disposal of e-waste is an emerging global environmental and public health issue, as this waste has become the most rapidly growing segment of the formal municipal waste stream in the world.

Electronic waste (e-waste), is a term used for electric and/or electronic gadgets that have either become obsolete or are unwanted or have essentially reached the end of their useful life. When electronics land up in landfills, the plethora of toxins like lead, mercury, cadmium, and barium that leach into the soil and water, as well as other heavy metals and toxic chemical elements, pose serious health hazards to all life and to the environment. The magnitude of the electronic waste management problem is indeed huge.

In 2014, 15-year-old Nishant Jain contracted bronchitis because of a dump yard fire that broke out near his house in Mumbai. While the fire had initially been a small one, due to the presence of e-waste and batteries, it spread and polluted the neighbourhood air. Nishant suffered a lot because of the smog. He researched and found out that the batteries had caused the fire in the dump yard to become severe. He discovered that although the manufacturing companies are aware of this fact, they don’t do much to spread awareness, except print a small note about it on the battery. Because of this, even highly educated people are unaware of this danger. And thus, the society nonchalantly keeps on discarding the e-waste along with the general waste.

According to a United Nations-backed report, the world produced 44.7 million tonnes of electronic waste in 2016—enough to build nine great pyramids of Giza. Of this, two million tonnes was generated in India alone, despite which not even 30 per cent of the population is aware of the need for and the right methods of e-waste management!

Given the present scenario, India faces the following challenges in managing its waste:

Determined to find a solution himself instead of waiting for the administration to take the first step, Nishant began talking to people in his colony as well as schools to not dispose of the batteries wantonly. He went online and searched for companies that collected batteries and e-waste, and even recycled them. In time, he came across an NGO, Children’s Movement for Civic Awareness (CMCA), which had helped a girl build toilets in her village. He contacted them and with their help, is now working with 13 schools to spread awareness and collect batteries and e-waste. Till now, he has collected over 350 kg of e-waste which includes mobile phones and laptops, and has sent it for recycling. Along with CMCA, he hopes to create such programmes in other cities across the country too, to spread e-waste management awareness.

Then there are initiatives being taken at a macro level by various professional players. One such entity is E-Parisaraa, India’s first government-authorised electronic waste recycler. Operational since September 2006, E-Parisaraa is engaged in the handling, recycling, and reusing of Waste Electrical and Electronic Equipment (WEEE) in an eco-friendly way. The objective of E-Parisaraa is to create an opportunity to transfer waste into socially and industrially beneficial raw materials like valuable metals, plastics, and glass, using simple, cost-efficient, home-grown, and environmentally friendly technologies, suitable to Indian conditions.

Systematic recycling prevents the accumulation of e-waste in landfills and also helps in protecting the environment by providing solutions for trash that is, at times, recycled under unhygienic conditions by backyard recyclers or dumped into open streams. Presently, E-Parisaraa has branches in Mumbai, Kolkata, Bengaluru, Chennai, and Gurgaon.

Another similar initiative is Ecoreco. Eco Recycling Ltd (Ecoreco), amongst its various services, also facilitates the disposal of fused lamps in an environmentally friendly way. Lamps, when lit, are beautiful to behold but when disposed of in the solid waste stream, they break and release mercury, causing harm to the environment. Often airborne mercury contaminates waterways and ends up in fish that live in them. When mercury-contaminated fish is consumed, it can affect the human nervous system, particularly that of young and unborn children.

Since almost all discarded lamps find their way into the municipal garbage, the need for lamp recycling is huge. Recognising the urgent need and opportunity, Ecoreco has developed India’s first mobile lamp-recycling facility that enables responsible recycling and disposal of lamps at the client’s premises (onsite). Through this innovation, Ecoreco not only keeps these products out of landfills and incinerators but also prevents mercury from being released into the environment. The process of recycling lamps captures the mercury, allowing it to be refined and reused.

It wouldn’t be wrong to say that one person’s e-waste can become another’s ‘object of virtue’ if upcycled. When we repurpose electronic waste, not only can we reuse it but also prevent it from landing up in landfills and polluting the environment. There are multiple ways in which most of the e-waste can be repurposed; the only requisite is an unleashed creative streak. From discarded CDs to hard disk circuits, most of the things can be upcycled and given a new identity.

Just like clothes, the choice of jewellery also reflects our personality. Jewellery recycled from e-waste would surely make a notable statement about one’s commitment to ecology. Instead of trashing old screws or RAM devices, turning them into a pair of funky earrings are bound to create a curious stir. They do look interesting.

And what about light bulbs? Ever imagined oil lamps made from light bulbs? Take that box of used/fused bulbs lying around, empty them out, and convert them into oil lamps. They will look pretty once lit. They can also be made into beautiful vases or hanging flowerpots. Fill the bulbs with water and stick some flowers inside to make an eye-catching artefact.

Keep kids entertained and simultaneously educate them about eco-friendly practices by creatively moulding old wires and metal casings into toys, instead of dumping them into the bin. Some artists create simple pieces like tiny clocks or business card holders from old motherboards.

Managing e-waste is not just the responsibility of any particular individual or the government; it is community work. All of us have a role to play in managing e-waste for a cleaner India, a better world, and a greener earth. A step in the right direction with ingenuity can create significant milestones.