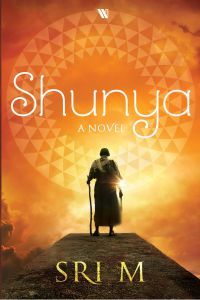 Be free in nothingness

We are usually barraged by sensations of all kinds that junk our mind with envy, fear, hostility, and what not. The Buddhists keep saying ‘be nothing.’ What does nothingness mean? Should we aim to become someone with no thoughts, emotions, or feelings? Or should we withdraw our attachment to this grand creation? Nagarjuna (a Buddhist monk) said, “Emptiness wrongly grasped is like picking up a poisonous snake by its wrong end. If we wrongly become silent and cease all our thoughts we get ‘stuck’.”

But who is Shunya? Is he NO-ONE, a void? Who is he? An avadhuta, fraud, or a magician?

Shunya revolves around an infidel character called Shunya, a bare-footed, fair-complexioned man who appears to be a madcap. Wearing a single piece of unwashed white mundu and a loose cotton shirt with a bamboo flute in his hand, he appears out of nowhere in front of Sadasivan, a localite, who runs a toddy shop. Despite considering him a madman at first sight, Sadasivan felt something magical about Shunya’s demeanour. The calmness of his expression and his dark, deep-set eyes gave him an aura of holiness. Saami—as they call him—settles into a small cottage in the backyard of the local toddy shop. Very soon, the miraculous abilities of Saami make him famous, and people begin flocking to him from all over the world. He has his own insane ways of intimidating people, yet healing and freeing them from archaic societal shackles.

As it happens, with fame, jealousy and hatred are not far behind. There were people who would have gladly seen him dead. But then, can anything ever destroy NOTHINGNESS?  Even after several attempts, his opponents kept failing in their mission to eliminate Shunya.

A seasoned writer, author Sri M is a Kerala-born spiritual guide, social reformer, and educationist, who in his debut novel has depicted the idea of Shunyata or nothingness in a humorous manner. He has been successful in rectifying the misconception regarding Shunyata through his fictional piece which is loaded with fascinating, and thrilling moments. A book you can’t put down once you start reading it.