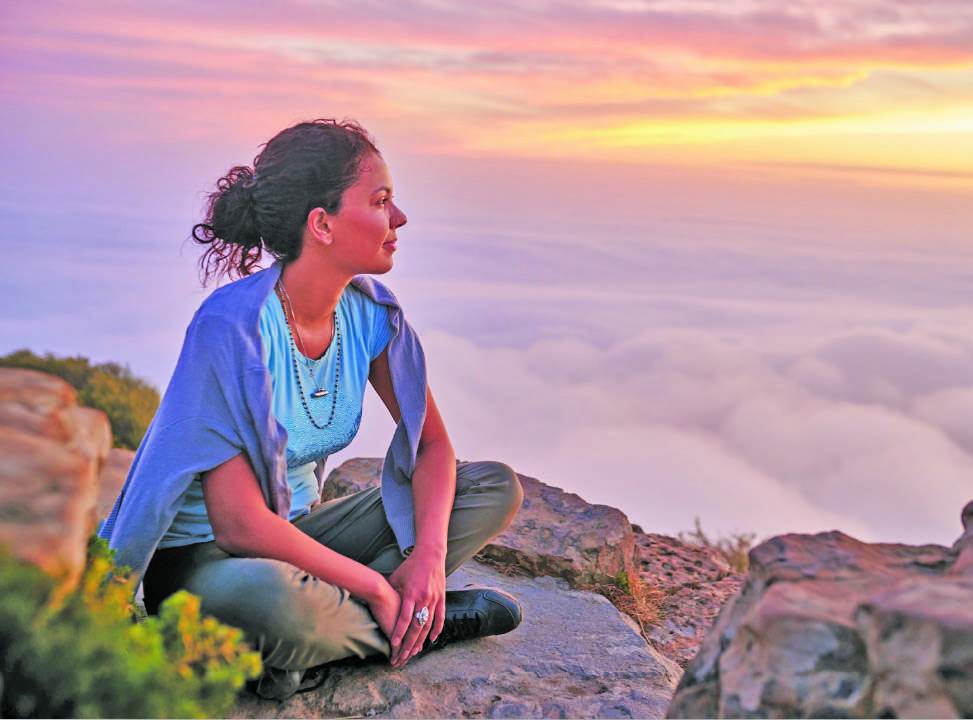 Becoming bigger
K Geethanjali finds that she can transcend her desires and shortcomings by expanding her mind, and hopes that it will take her to the state of ‘no mind’

The Himalayan dream was something that burned bright in me. Though I had been to Haridwar and Rishikesh while just out of college, I had never really understood the import of these places and determined to go there again to fully absorb the vibrations.

A group of us—my friends and I—planned to go someday, but Life took us in its flow and somehow the trip together never materialised.

Rati was the first to go. She went on the Char Dham yatra with her husband and in-laws. I still remember the pang I felt as I looked at the photos she sent.

Then Sheela went, and I was like “Hmmm, high time I did something about it myself.” But Life, while it took all my friends in its fold and deposited them one by one on Himalayan soil, seemed to have forgotten only poor lil me and my friend Neela.

Years passed—years spent in working and meditation. As my meditations deepened, my Himalayan dream seemed to lose its intensity. And then Neela did it. She went all the way to Kailash.

No pangs of jealousy
But what surprised me was my own reaction. There was no sharp pang of jealousy or self-pity. ‘The poor lil me’ seemed to have lost a little of its energy. There was only a thought: “Wow. That is a nice experience indeed!” followed by another one: “If Life takes me, it’s okay. If not, it’s still okay.”

Taken aback by my own lack of jealousy, I shared this new response with my son and his cryptic remark was “You have become bigger than the desire to go to Kailash!” It was then that I realised that my mind was expanding from its gross nature and becoming vast and transparent.

It was around this time that I came upon a video posted on Sister Shivani’s Facebook page. “The state of your mind does not depend on the circumstances outside,” she stated in a matter-of-fact way. I had heard this message before through the words of other masters, but it seemed to make sense to me only now. If my mind could become expansive enough to become bigger than such a strong desire, I could do the same with my other failings!

Watching your mind
Anxiety regarding deadlines has been my failing in the workplace. At first, I resisted this anxiety. “A meditator should not be anxious,” the world told me, and so I told myself. So when anxiety showed up, I became more anxious. I decided to carry this notion of a relaxed and restful vastness into my little failings. I knew that psychologists often ask one to flip the coin when confronted with a negative emotion. What if instead of contracting and resisting the anxiety, I allowed it to arise in the vastness of my mind?

So, the next time I was asked to take up a responsibility and deliver the goods within a short time frame, I stepped back and accepted it. I watched my reaction. I could see myself hyperventilating. Anxiety coursed through me as usual, but I watched it just as one would, a storm outside.

“When you inhale air, you call it your breath,” says the master, Mooji. But it is just air. We do tend to identify with things that enter our system as belonging to us. What if the anxiety passing through me wasn’t my anxiety? What if it was just an emotion passing through? The feeling intensified, and then just as suddenly as a summer shower, it left my system, leaving behind it a curiously beautiful calm.

Passing emotions
I had just had an experience of expanding or becoming bigger than the emotion! Is that why it’s called transcendence? I wondered. Then I realised with a shock that throughout the contraction of the anxiety episode, this spaciousness had always been there.

The next time I felt anxious, at the back of my mind was the thought that this was just a feeling passing by, and I was not affected by it. It was thus less intense.

Now, when I get anxious, I embrace it. It is a chance for ‘who I am not’ to come up and dissolve. And each time the intensity lessens. These days, I try this technique with all limited emotions. It’s a game that can actually be fun. Like a balloon, I am becoming bigger—bigger than my last fear, bigger than my last desire, bigger than my resentment.

As they come up, these limited emotions are embraced as they are coming into the light of my consciousness. They appear at the surface as little hollow ephemeral bubbles that—when pricked by the laser beam of my awareness—burst, revealing their intrinsic empty nature. And as there are any number of negative emotions lurking under the surface, the game is still on!

Maybe one day, my mind will expand till it dissolves into the ‘no mind’ I’ve heard of. “Hope it happens before I leave this earthly form!” I say to myself, but then I step back and laugh. Maybe I need to become bigger than even this desire and just watch it as it arises and let Life take its course.