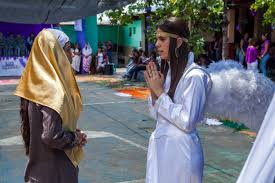 A Jain nun and luminary, Vaibhav Shri Ji, is freeing the conservative Jain faith of many of its outdated customs and traditions and encouraging the laity to use their discriminating intelligence, says Bhaavin Shah

I have had a love-hate relationship with Jainism, the religion I was born into. The interpretation of this ancient faith by its torch-bearers, mutely followed by the laity, has reduced its profundity to a prescription of rules, rituals and practices that I could not identify with. However, when I met the Jain saint Aagamveta Sadhvi Vaibhav Shri Ji Maharaj Saheb or Vaibhav Shri Ji (as she is known), I recognised that the sincere practitioner could always find her way to the heart of the faith, no matter how swaddled it is in empty form. I could see how she and her group of fellow-nuns lived wisely, rebelled righteously, and eloquently upheld the gems of this lofty tradition without getting lost in its rules and regulations. Sitting at her feet and listening to her exposition of Jain ideals was like a whiff of fresh air that reintroduced me to my own religion.

An original thinker and an erudite saint, wellversed in all the Eastern and Western philosophies, she is widely known for reinterpreting ancient scriptures in contemporary style. Having authored 15 spiritual books, she has also delivered hundreds of discourses and workshops that particularly appeal to the youth and the forward-thinking. Inspired by her deeksha (initiation) at the young age of 20, her mother and three of her sisters followed suit. Led by Vaibhav Shri Ji, together they run a movement raising people’s consciousness aptly using modern-day digital platforms like Youtube, Whatsapp and Facebook to take their work forward. They are also currently putting together a spiritual centre at Pali, Rajasthan. One can know more about their mission on www.charammangal.com. Excerpts from the interview:

What's the essence of Jainism?

One who experiments and succeeds in gaining complete self-knowledge and self-mastery is called a Jin (the victorious one). That which has been intuited, inspired and propagated by the Jins is Jainism. Their divine expressions are called jinvani oraagamvani. The main message of Jainism is to know oneself. Jainism gives a set of ideas and methodologies to know oneself in one’s entirety. It is a philosophy of selfresponsibility. It accords you the highest respect. It gives the reins of your life into your hands. It frees you from any and every external authority. It doesn’t believe in an external God who creates and monitors you. It says you are your own friend and enemy. It affirms that you are the sole creator of your life and destiny.

If one is self-originating, where does the world and its Creator fit into Jainism?

In most traditions, the word 'world' has only one connotation. According to Jainism, the word can imply either srishti or samsara, both of which have distinctly different meanings. Srishti stands for mental creation. It is our personal world. Each person creates his own world through his intentions. Thought impressions in his head and feeling impressions in his heart together create consequences. That’s what personal karma is all about. When all our karma join up, it creates our collective world – samsara. According to Jainism, srishti and samsara do not originate from an external Godhead. Our collective world follows certain principles, is self-organised and self-sustaining, similar to Tao.

A monk has no mission as such. He is alakhniranjan. Alakh means 'without goal' and niranjan means 'blemishless'. Thus, by freeing himself of goals he remains untainted. That said, he can’t help but partake of his fullness. And hence some or the other mission will earn his interest. Our master used to say that if a river becomes full, it will automatically irrigate and lend fertility to the banks. A sadhu just walks in his own blissfulness and whosoever happens to come across him, benefits. However, my only real mission is to be attuned to my inner-self every moment.

Who is this master? What is your lineage?

We have different lineages. Our spiritual guru is Aatmagyani Shri Viraat Guruji who enlightened us. Our sectarian Guru is Shraman Sangh Aacharya Dr Shiv Muniji and Shri Sumati Prakashji Maharaj. Our astral Guru is Acharya Samrat Yogiraj Vijay Shanti SureshwarJi ‘Mandoliwale’ whose connection happened with the grace of Viraat Guruji.

"The main message of Jainism is to know
oneself. Jainism gives a set of ideas and
methodologies to know oneself in one’s
entirety. It is a philosophy of self-responsibility.
It accords you the highest respect."

What is religion to you?

Who am I to define religion? Lord Mahavir has done it in the most succinct way. Lord Mahavir says, "Aanay Dhammo," meaning 'Religion is Order'. The order that he mentions is not an outer order of some spiritual path or scripture. He is talking of an inner order, an inner harmony. Savouring this inner harmony is what religion is all about. If you observe, this is a very secular definition. It has no sectarian overtones.

What do you think is the difference between religion and spirituality?

To me, the essence of religion is spirituality.Religion is the original framework though it has somehow become synonymous with rituals, mythologies and philosophies. People pursue a religion without knowing its essence. They do it out of tradition or to seek validation, or to simply hide under the comfort and authority of something larger than themselves – like a guru or a sect. Whereas religion is none of these. The purpose of religion is to offer a framework to connect you with your own self. Along the same lines, I often say that religion is the art of living and spirituality is the art of dying. And mastery in the former gives you mastery in the latter.

Jainism itself has many schools. What's your school about?

From the standpoint of custom, we belong to the ‘Shwetambar Sthanakwasi’ school of thought. However from an existential perspective, we are not bound by any school whatsoever. A saint is ‘apratibaddhvihari’ i.e., he is an unshackled wanderer who moves freely without being limited to any specific person, place, tradition and thought.

Why are you considered a revolutionary Jain saint?

(Smiles) Well, that question is actually for those who find us so. However, I guess what people find revolutionary is that we (myself and our group of sadhvis) don’t stick to conventional practices which don’t have enough rational base.

In our discourses, we promote right understanding and clarity of perception. We inspire people to decide their disciplines not based on tradition, but on intelligence. Tradition should not be upheld simply because it’s tradition, nor should tradition be rejected because it’s tradition. Tradition should be validated with the touchstone of one's intelligence and tweaked to suit current times.

We act from our consciousness and wisdom, not by rules that have lost their relevance. We use technology, internet and social media to share our messages. Unlike other Jain nuns, we run our discourses at night for the convenience of professionals and students. We hold workshops concerning the day-to-day issues of families and society, not just on plain philosophy. We go to colleges, jails and all types of institutions where we can be of use.

How come you rebel against defunct customs and yet don the saint’s attire?

Well, there is more to it than that. At a personal level, I am free of any kind of rigidity. However, we have repeatedly observed that a seeker is more receptive when he is listening to an ordained monk in attire. Besides, we also have a role to play in awakening our fellow renunciates. They are far more open to wake up from their customridden slumber when they listen to a fellow monk instead of a layperson. I once heard of a fakir who would voluntarily commit crimes and go to prison because he felt that he was more needed in prison than elsewhere. It’s just a garb that helps our cause. Nothing beyond that.

No. Jainism teaches one to live in the correct social, environmental and spiritual order. It talks of following one's duties, respecting one's environment and living in inner harmony. Lord Mahavira said, “ahasuham devanupp iye,maapadibandhamkareha” i.e., life is wonderful when one is neither bound nor binds others. How can something like this be anti-life?

With all its austerities, Jainism seems to be about denial and repression more than intelligence and celebration. Doesn’t that make it anti-life?

I can relate to your question. Many sects in Jainism do present it in that way. The Tattvaarth Sutra says, “mucchapariggaho putto,” which means attachment is the problem (not involvement). Many members of our own clan, who consider themselves authorities, have reduced Jainism to a set of self-denying disciplines, to a religion that’s obsessed with what to eat and what not to eat, whereas it is actually much more. We too are disappointed with such a childish approach and are doing our best to bring light to the Jain community that has been misguided by its own monks quite often.

There are spiritual schools that talk of leaving everything to God. Jainism talks of the exact opposite concept of self-responsibility. How does a seeker decide which way to go?

Well, if one digs deeper, one can see that leaving it to God or even fatalism (niyati-vaad) is a half philosophy. While it is true that our past tendencies have a bearing on our current life circumstances, as well as on our inner climate, yet at every single moment, free will prevails. We can navigate our life in any direction by making fresh choices and decisions. That is self-responsibility (purushartha) which goes hand in hand with destiny (niyati). Besides these two, Jainism includes three more factors that lead to causation. These are ripeness of time (kaal),intermittent reasons (nimitta) and innate disposition (svabhava).

"Jainism teaches one to live in the correct
social, environmental and spiritual order. It
talks of following one's duties, respecting
one's environment and living in inner harmony"

What's your parting message to the Life Positive readers?

I can see that the readers of a magazine of this order must be very intelligent people. I would exhort you to employ your intelligence to go beyond craving, aversion and boredom. That’s the way to bliss.

Bhaavin Shah is a devoted disciple and a

modern day yogi. He is a Mumbai based,
trainer, healer, life and business coach.