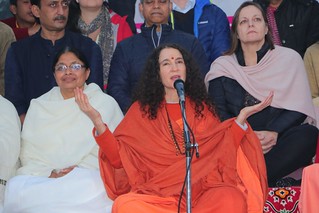 Call of the Ganga

What is it about the Ganga that is profoundly moving and leads many to declare ‘it’s not just a river’? For aeons, seekers, householders, even scientists have answered her call and appeared on her banks, never to leave again. We meet one such who left everything to be with the Eternal Mother

She bares her slender feet, descends the steps and immerses her hands in the sacred waters of the Ganga. Then, standing up, she closes her eyes and folds her hands, moving into a private communion with the Ganga.

Standing there on a beautiful day, the breeze making a wavy pattern on her pristine white sari, the rays of the rising sun forming a faint halo around her face… I wonder, what made this Stanford University-educated scientist choose a life of sewa at the Parmarth Niketan ashram in Rishikesh?

Sadhvi Bhagwati, American Phoebe Garfield a lifetime ago, is the international director of Parmarth Niketan’s Youth Education Services. She runs the Parmarth Shiksha Mandir that has adopted many deprived children and educates and helps them find jobs.

Back at the ashram, the Sadhvi relates her story: “A series of coincidences led me here. I sometimes wonder—why Rishikesh? Why this time? Why stay here? It is a long story, but at the end of the story, I would just say, I was guided by God.”

Phoebe Garfield was 25 years old and doing her PhD in clinical psychology when she first decided to come to India on a trip. “I picked up a Lonely Planet guidebook on India and turned to a page at random,” she remembers. “It opened at the section on Rishikesh, and on a whim, I decided that this would be my first stop here.”

She continues: “I did not have any particular search or question in mind when I began my journey. But on arriving in Rishikesh, at the banks of the Ganga, I felt I was here for a purpose though I did not know then what it was.” She felt she had no option but to listen to the insistent call of her inner voice.

Once in Rishikesh, Bhagwati was deeply moved by the river Ganga. Recounting her first encounter with the holy river, she says: “I burst into tears, of having come home, of having found the truth. I found myself swimming in an immense ocean of bliss that my body could not contain. I would lie on my back at night and feel as if my heart would explode and that if I lay on my stomach, it could burn a hole through.”

During the first week of her stay in Rishikesh, Bhagwati just sat on the banks of the Ganga all by herself the whole day. More often than not, she would be crying tears of ecstasy. When her friends would come to take her back to the hotel at night, she would feel like a child being separated from her mother. “I could not wait for the first light of the day to rush back, as if into the arms of my mother,” she remembers fondly.

During one such visit to the banks of the Ganga, Bhagwati had an incredible experience that would be the first in a series of coincidences that would completely change her life.

Six years before she arrived on the ghats of Rishikesh, Swami Chidanand Saraswati, founder of Parmarth Niketan, had begun the tradition of a daily aarti at the riverside. At sunset, priests and students from the ashram would arrive carrying flowers and fruits, perform the puja and disappear.

Says Sadhvi Bhagwati: “As usual, I was sitting on the banks of the Ganga when I saw this wave of young boys clad in yellow garments rush out as if from nowhere, lay down the table at the ghat, and perform the puja. And just as quickly as they had appeared, they went back. I felt it to be the the most beautiful experience of my life.”

“At the banks of the Ganga, I burst into tears of having come home, of finding the truth”

She soon discovered that this particular route, which took her in front of Parmarth Niketan ashram, was comparatively a more ‘serene’ way of getting back to her hotel from the riverside.

“One day, I just walked in through the gates of the ashram. That very moment, as I stepped within, I heard a voice say, ‘you must stay’. I was a scientist by training then and did not believe I could hear disembodied voices of any kind. I looked around to see if there was anybody around who could have spoken those words, and sure enough, there was nobody there,” she recalls.

Once she met Swami Chidanand Saraswati, she knew that it was under his guidance that her life’s path lay. Till then, she had felt dissatisfied with herself as she felt that no one was actually benefiting from her existence.

This feeling had become a deep-seated issue within her psyche, one that required an urgent resolution. Says she: “I would wake up in the middle of the night and question myself again and again. Who benefited from my existence today? The answer would always be, ‘my ego did’.”

This need was met once she was initiated into a life of sewa under Swami Chidanand Saraswati’s guidance. Says she: “After meeting Swamiji, I realised that it was through him that I would be acquainted with what were for me the really important things in life—how to attain peace, happiness and meaning. Under his influence, I felt that I had been given the opportunity to finally make a positive difference in people’s lives.”

Sadhvi Bhagwati has achieved this through her work with destitute and underprivileged children at the Parmarth Niketan Shiksha Mandir. She is able to bring a quality that melds both western and eastern points of view. She points out the view taken in western psychology that if children have been traumatized, abused or abandoned at a young age, they almost always require one-on-one counselling.

Many of the children who live and study at the Parmarth Niketan ashram come from disadvantaged homes and have been exposed to violence, poverty and crime. Yet not one of them has ever required any therapy or counselling. Imagine hundreds of boys living together and there not being even a single case of violence—not even a black eye or a bloody nose, or any other symptom that could point to a traumatic past, reveals Bhagwati.

She attributes all this to the influence of a beneficial and bengin combination of the right atmosphere and living on the banks of the Ganga. “This is an incredible testimony to the power of being in a holy place, to the power of living on the banks of the Ganga, almost in the lap of the Himalayas, chanting mantras regularly, learning the Bhagavad Gita, and most importantly, living under the tutelage of a a guru figure that is all-loving and compassionate,” explains Bhagwati.