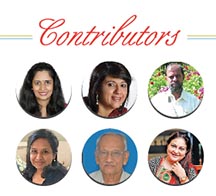 Naini Setalvad
Naini Setalvad is a nutritionist, specialising in lifestyle and immunity disorders. Her foundation, Health For You, throws light on healthy food habits.

Pradeep Krishnan
Pradeep Krishnan is a student of consciousness, based in Kerala.  A seeker by nature, he is deeply attracted to the teachings of Sri Ramana Maharshi and Sri Nisargadatta Maharaj.

Vidya Murlidhar
Vidya Murlidhar lives in Charlotte, North Carolina with her husband, two children and father-in-law. When she is not writing, she spends her time dancing, baking and learning about Reiki and energy healing.

Prof AVR Rao
Prof AVR Rao is a former company executive who has worked with various multi-national companies for over four decades. He holds double masters degree in philosophy and business economics respectively, and is also a teacher and freelance writer.

Smita Jaykar
Smita Jaykar is a well-known face of the Indian entertainment industry. Born in Mumbai, Maharashtra, she is known for her roles in popular Indian TV serials and has featured in Hindi movies like Devdas (2002), Sarfarosh (1999) and Pardes (1997). She is also a gifted spiritual healer and conducts workshops on auras and chakras.