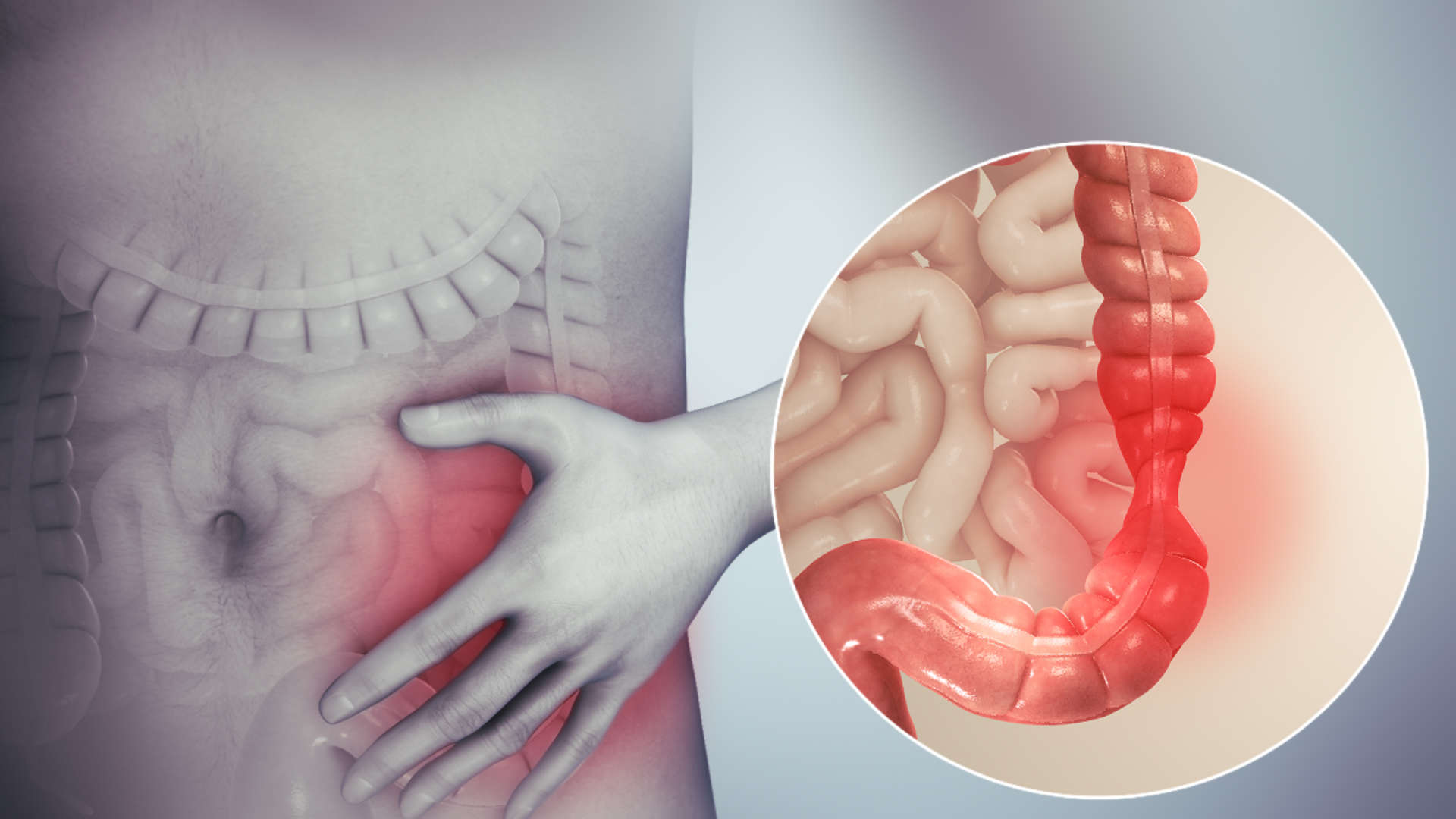 This widespread condition can be tackled with a variety of treatments, say Paromita Bhattacharyya and Punya Srivastava

Irritable bowel syndrome or disease is a common medical condition in today’s world. From the allopathic point of view, the two common conditions in IBS are Crohn’s Disease characterized by mouth ulcers and chronic inflammation of the digestive tract, and Ulcerative Colitis causing difficult bowel movements.

Other general symptoms include severe indigestion, abdominal cramps, fatigue, gas formation, bloating and alternating bouts of constipation and diarrhea, no matter what one eats.

1) Absence of sufficient ‘good’ digestive bacteria in the gut and more prevalence of bad bacteria.

2) Genetic causes. If parents and other family members suffer from it there could be a strong tendency for it.

3) Inability to handle the stress of day-to-day living. Disturbing thoughts of some impending stress or sudden onset of stress.

4) Intolerance to certain foods, the most common ones being dairy or gluten (Celiac Disease), or both.

1) Many sufferers are unaware that the basic cause is just an imbalance in the bacterial flora present in the digestive tract. Those who suffer for a long time automatically develop a stress response to the stimulus of acute gastric discomfort and believe stress to be the main culprit. They are told ‘it’s all in your head’ whereas it may actually be ‘all in your gut’! It may have occurred due to excessive use of antibiotics and other allopathic medicines over the years. For those severely affected for many years, the best way to resolve this issue is a simple, practical, three-step method. To ensure that you really do have IBS, first get yourself thoroughly checked by a competent gastroenterologist.

The three steps are:

a) First of all, rule out any bacterial or fungal infection of the gut by doing a simple stool test or stool culture analysis. (Sometimes in severe cases, an endoscopy, colonoscopy, and blood tests for detecting pancreatic enzymes and liver enzymes levels are advised. In case of infection, get treated with required antibiotics and or antifungal medication or, in case of enzymes deficiency, get the required enzyme supplements prescribed by a gastroenterologist). If the reports are normal, go to step b.

b) Start with the strongest probiotic in the market, like VSL NO3 capsules after discussing it with your doctor. (not to be used in critically ill or immune-compromised patients). Ten capsules cost Rs. 250. Each of these capsules contains eight different kinds of good digestive bacteria that help to increase the good bacteria count in the gut. Take one or two capsules per day, after meals, for at least two or three months, or as prescribed by the doctor. Initially, the gas formed would be the gut’s way of adjusting to the good bacteria and that can be ignored. Gradually, the stomach settles down, stools are well-formed and symptoms recede until one feels normal and can digest a variety of foods. Stop the medicine if there is any resultant constipation. Have a high fiber diet and plenty of fluids, to prevent hemorrhoids formation.

c ) After the capsules are stopped, continue with a milder probiotic like Vizylac or Rinifol capsules (especially for the dairy intolerant who cannot take yoghurt). Take one capsule per day after meals only if required and follow the doctor’s advice. Continue taking yoghurt or Yakult on a daily basis, to maintain the good gut bacteria count. Certain prescribed digestive enzymes like fish oil capsules can be taken along with meals.

2) Genetic causes have to be borne as we can neither choose our genes nor do away with them. However appropriate precautions ensure a good quality of life.

3) Yoga, meditation and counselling help to control the anxious response to stressful situations. Relaxing the mind requires a lot of time and patience but the benefits are many as sudden panic situations can be handled without disturbing the gut. A constitutional treatment from a well-trained homeopath helps too if one wants to avoid allopathic medications for the mind which may be habit-forming in the long run.

4) Food intolerance can be determined by a food allergy test or by simply ruling out certain probable problem foods, turn by turn and figuring out for oneself, what is actually causing the problem. The most common are dairy intolerance and gluten intolerance (Celiac Disease). Other allergens include yeast, egg, corn, soy and peanuts. An allergic reaction causes hives and inflammation. Intolerance, on the other hand, causes gas formation, bloating, and indigestion, thus precipitating an IBS attack. Complete dairy intolerance would require one to rule out any product containing any milk or milk product ingredients, namely, casein, lactose, malt, and whey. Read contents on food packets to rule out the above. Soy milk and peanut butter are good alternatives. In case of gluten intolerance (Celiac Disease), avoid wheat, rye, barley, processed cereals, pasta, noodles, breads, desserts made with gluten flours. Glutenfree products include buckwheat, millet (nachni), amaranth (rajgira), soy, corn, organic oats, quinoa (pronounced as keenwah), sorghum and rice. Legumes, nuts and seeds can be taken.

5) Regularise eating habits. Eat small nutritious wholesome meals over the day, to maintain energy levels. Eat on time, chew slowly, and avoid gulping down food. Food should not be too hot. Drink water half an hour after meals, for proper digestion. Avoid eating if you are tense or not hungry. Sometimes, eating tasty food that one craves for intensely, helps in salivation and digestion and wards off an IBS attack. For example, a milder bhel prepared hygienically at home. Do not bend over or lie down or sit slouched, right after a meal, to prevent any acid reflux. Walk around for 15 minutes after any heavy meal. Soak a teaspoonful of fennel seeds (saunf), in a glass of water overnight. Chew the soaked fennel seeds and drink the water, first thing in the morning. This helps to digest meals well throughout the day.

1. Identifying and removing food intolerances is a must. This can be achieved by eliminating certain food items from the diet for a week each and seeing which elimination gives the maximum relief.

2. Improving gut motility is also necessary. Psyllium (Isabgol) is a good source of soluble fiber that helps in bowel transit and gives relief from constipation. 3. Restoration of good bacteria in the gut and maintaining their balance is also important. Ayurveda emphasises the use of buttermilk. 4. Increasing the number of pancreatic enzymes is another important for IBS patients. These enzymes help inhibit the growth of bacteria in the small intestine and also improve protein digestion.

• Include a good amount of curd in diet.

• Triphala powder (3-6 gms) once or twice a day is useful in IBS with diarrhea.

• Trikatu powder is beneficial. It is a combination of three herbs – shunthi (sonth/dried ginger), maricha (black pepper) and pippali mixed in equal quantity. It helps regulate digestion and metabolism.

• A specific medication procedure – parpati kalp may be taken under the strict supervision of an ayurvedic expert. It offers a wonderful cure for IBS.

• Ensure you get plenty of rest and sleep, which in combination with ayurvedic medicines, works well for IBS patients.

Apart from these cures, taking anti-IBS capsules is also helpful. These capsules harmonise the doshas associated with IBS and calm the psychological component of the digestive system and brain.

According to Zubair Mohammed, Hamdard Laboratories India, IBS is a gastrointestinal disorder characterised by altered bowel habits and abdominal pain in the absence of detectable structural abnormalities. It is a disorder of the young, with most patients being less than 45 years old. Women are prone to IBS two to three times more than men. Patients may have mood or anxiety disorders. Symptoms are abdominal pain, bloating, a feeling of incomplete evacuation, diarrhea or constipation, mucus production, and pain relieved by defecation. The patient may also experience straining or urgency.

The pathogenesis of IBS is poorly understood, although roles for abnormal gut motor and sensory activity, central neural dysfunction, psychological disturbances, stress and luminal factors have been proposed.

• Use of certain types of foods such as chocolate, dairy products, alcohol, coffee.

• Use of certain drugs. Management usually involves education, reassurance, and dietary/lifestyle changes. IBS as such has not been discussed in Unani. But a number of pathological conditions mainly based on symptoms have been discussed comprehensively. IBS is not a disease but a symptom disorder of functional origin. The above-mentioned symptoms discussed in Unani literature also do not have any organ base. Therefore, the symptoms are in correspondence with the symptoms of IBS. • Patient counselling and dietary alteration – reassurance and careful explanation of the functional nature of the disorder and how to avoid obvious food precipitants are important first steps inpatient counselling and dietary change. Avoid coffee, legumes, and cabbage and any food that appears to produce symptoms.

• There should be a fixed routine for eating

• Establish a daily routine for passing stool at a fixed time.

• Rest after lunch and walk after dinner

The signs and symptoms of IBS can vary widely from person to person and often resemble those of other diseases. Symptoms can occur over a single long period or in several shorter bouts. Depression and anxiety disorder is highly prevalent among IBS patients. The common symptoms are abdominal pain or discomfort, abdominal fullness, feeling of constipation or diarrhoea, incomplete evacuation, mucus with stools, straining at stools, epigastric pain, and milk intolerance.

Based on symptoms, IBS can be classified in three types – with predominant bowel dysfunction, with predominant pain and with bloating. Based on precipitating factors, it is divided into post-infectious (PI-IBS), food-induced (meal-induced) and stress-related.

According to Dr. Rajkumar Manchanda, Director General, Department of ISM & H, Government of NCT, IBS is a functional gastrointestinal disorder with many etiologies playing vital role for manifesting of symptoms. Aetiological factors leading to the IBS can be regarded as three points of a triangle. In one corner are physical causes such as a deficiency of dietary fibre or organic disease; in another corner are adverse life events which lead to feelings of hopelessness and hence anxiety; and the third point in the triangle is the patient’s personality. “Patients with IBS, in whom the sole problem appears to be deficiency of dietary fibre, can be treated with wheat bran and fruit. Stressed-out patients benefit from repeated sessions of counselling,’ he says. A homeopath deals with patients holistically taking into consideration their physical complaints, and mental status. This holistic approach is unlike other treatments and offers a complete personalised approach to the condition. Through homeopathic treatment, one could expect relief from acute symptoms of diarrhea or constipation initially, followed by lesser in number and intensity of stress and anxiety.

With all these options before you, and with patience on your part, you are sure to get the better of your IBS.