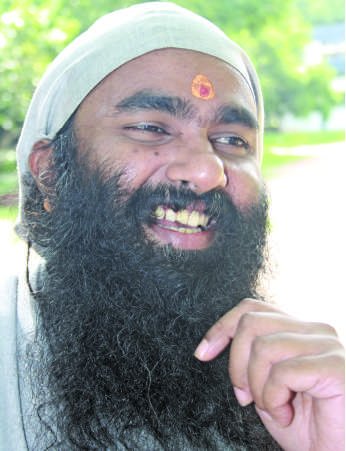 Devoted to devotion
At the core of oneness is devotion as well as due attention to one’s thoughts, words, and deeds. Hankering after enlightenment is what takes one away from the experience, advises Mahamuni Sritha Mahagatha

That was the moment when I was no more, says Adhishri Paramanugrahito Mahamunivandaru Sritha Mahagatha, describing his moment of union with the cosmos. Everything that exists is squeezed into a singular point or moment. Appearances are mere deception caused by the ego. In union, the ego does not survive, and existence is clear like a crystal.

Mahamuni Sritha is of the view that talking too much about oneness creates an overdrive in people that makes them miss the experience. He says that he was never after oneness or enlightenment but was devoted to the Lotus Feet of his Master. “All I could see was the feet of my guru. I washed them then, I wash them today. The moment of enlightenment lies between them,” says the Mahamuni.

Childhood spent in absorption
The childhood of Mahamuni Sritha was a perfect prelude to the divine experiences he was to have. He was always seen absorbed. It was difficult for others to tell whether he was absorbed by something or absorbed in something, but what they saw was a little boy who sat like a lifeless rock as time and events passed by him. “Events qualify Time. Blessed is the one who is not affected by the events,” says the Mahamuni as he prepares devotees for detachment.

Mahamuni Sritha’s hands naturally reached out to help the suffering ones. He did not care whether the other was a leper or a mentally unsound person. He reached out to them when other kids of his age stood by and watched, trying to put fear into his mind. “I am not different from anything or anyone. I am all that is,” says the Mahamuni, echoing the words of the ancient sages.

Music cannot be left out when talking about the childhood days of Mahamuni Sritha, though he did not receive any formal training in it. The child could be heard humming ragas of devotion and ecstasy from a very early age, leaving those in the house enraptured. “I am simply an expression of the Whole. You must empty yourself absolutely of everything you have known to be that purity,” the Mahamuni tells the seekers of enlightenment.

The guru is waiting
“The moment of oneness cannot be visualised on the twenty-four-hour clock we are familiar with. The universe does not abide by it. The idea of time that we have is only to facilitate survival on this planet. As long as survival occupies the sphere of your existence, oneness remains a concept and, for some, merely a fantasy. One has to shun all ideas of survival, which mostly exist as fear and take the plunge into absolute surrender. In these uncharted waters, the guru is always waiting for you.”

“I was afraid too. But I did not want to be stopped by it. The comforts and securities at home were heavenly for sure, but it was not heaven that I was after. Stepping out of the house at seventeen, it took me seven years to be in the physical presence of the guru, but in all the years leading up to it, there was not a moment where I was uncared for. The roads were swept for me so that no thorns could hurt my feet.”

Beyond time
“To me too, it did not come at once. In the years that led my steps to the embrace of the guru, there were days with no awareness of the ordinary sense of time, the state which was not wakefulness or sleep or dream. In the absence of the ordinary sense of time, the ordinary idea of ‘I’ too could not exist. But once I returned to the time dimension, everything was as it was. Through all these, my mind was able to conduct itself in the light of the new awareness.”

“At no point did I doubt that ‘I am.’ There was no point in existing as a mere creature having no awareness of the fullness that I am. But this never led me to look at others in a disparaging manner or with scorn. On the contrary, I was filled with a deep respect for everything and everybody that came my way. I could see the guru coming in various forms and as various events to ensure that I did not desist from what I began. The whole journey is an experience of compassion.”

Scintillating visions
“I was sitting by the Ganges one day when I suddenly saw a globe of light passing beside me. But before I could turn and take a look at it, another one flew by, submerging me into an incessant flow of various objects of varying intensities. Even when there were no objects to experience, I could distinctly feel the vacuum before another sphere passed by. It was not a dream for I found myself exactly where I sat more than twenty-four hours earlier.”

“In the early days of my association with the internet, I saw an image which got me intrigued. It was an image that I have seen countless times in meditation, the image of our galaxy. This was before what you call my experience of oneness. Our shastras (scriptures) state that ‘I am everything that is.’ Today, our scientists are slowly discovering tiny details of this singular existence using verifiable modes and mechanisms. This is commendable. The shastras also remind us that ‘I am not limited by anything.’ What we discover is what has come to be, but the seers have seen beyond that.”

At the feet of the guru
“Devotion is at the core of oneness, even if you do not recognise it in the conventional way. I was not after enlightenment, but I paid attention to each of my actions, every word that came out of my mouth, and every thought that I applied to my mind. This attention was not limited to myself, but I extended it into the service of the guru, aligning my words, deeds, and thoughts to every movement of His, submitting to the Silence He spoke from. Serving the guru meant serving those around Him too. No demand was irrational and this formed the basis for egoless living.”

“To enter into the Whole, I had to forget myself along with everything I was familiar with. At each step, I saw only the feet of the guru paving the way in the uncharted territory I was in. When I was not walking, His feet rested beside my head. The experience of the Whole arises from close attention, described as shraddha in our shastras. This is what matures into devotion, described as bhakti. Most of the time bhakti is mistaken for rasa or what it brings to you. There are times bhakti can be absolutely unfruitful, where only duty exists, and it is that duty to the feet of the guru that has always kept me protected in my journey.”

“The ego is always ready to pounce upon the space between you and the guru. You cannot see the ego with your eyes, but it occupies the space like a third person and keeps you wondering why you are missing the oneness. Being duty-bound, not being a seeker of the rasa bhava, always worshipping the feet of the guru as Bharata did when Shri Rama was living in exile, one can clear the space between the guru and the self. This attitude makes you an ideal candidate for the Eternal Wisdom too.”

“Ego is assumed self-importance. In oneness, everything is in its place and everybody is important. This is enlightened awareness. I forever am just a devotee raised by the compassionate touch of the guru. I prostrate in surrender as long as I am here as I am.”