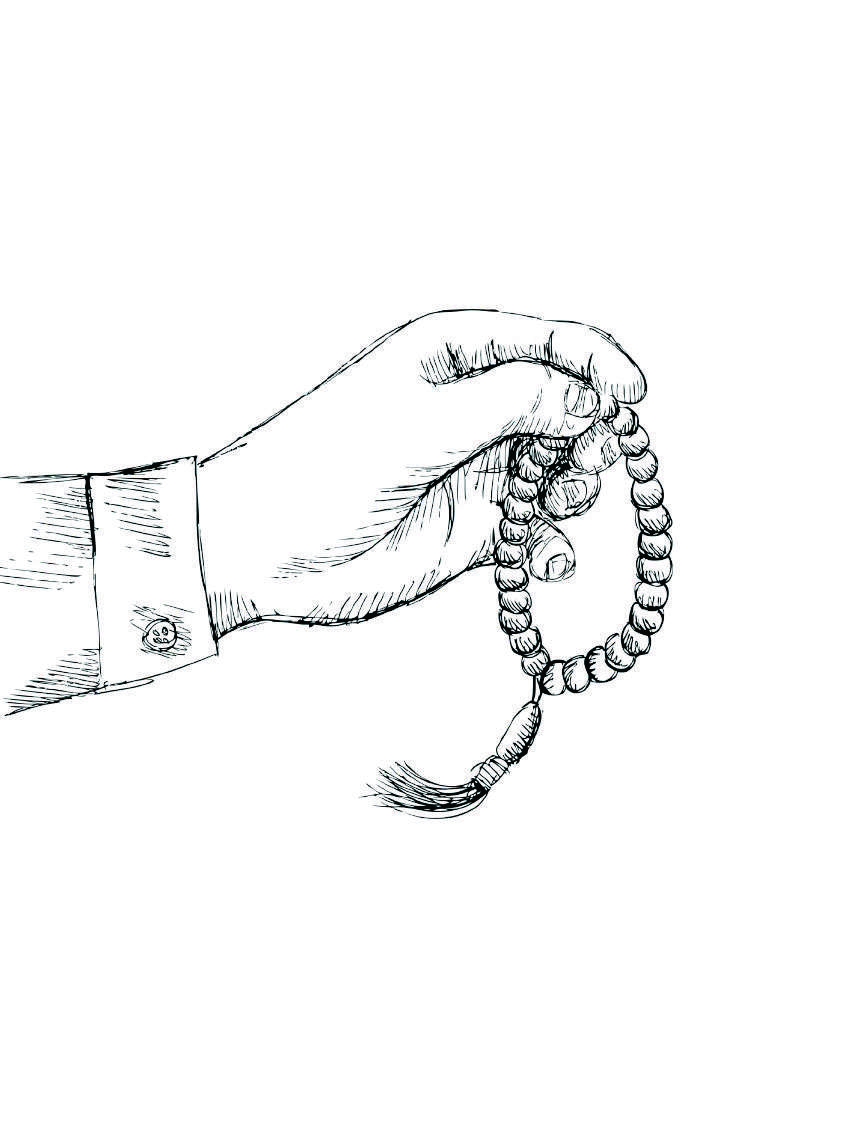 Chant and be happy

Recently, I was talking to a young, aspiring actress in Mumbai. When I asked her about the infamous casting couch in the Hindi film industry, she narrated an incident to me. A production house had called her for an audition after seeing her Instagram pictures. She was selected and was informed that the shooting would happen in the Maldives. This was going to be a big-budget shoot, and money was no object; the role and payment terms were discussed. Finally, the man asked her if she was willing to ‘comp.’ Puzzled, she asked the meaning of ‘comp,’ only to be told that it meant ‘compromise.’ The young actress, though struggling and without work, refused the role.

“Initially, after meeting various people in the industry, I started thinking that I too would compromise, if needed. But I changed.”

“What changed you?” I asked, curious.

“I developed self-respect and self-love,” she said. “My self-respect told me I couldn’t compromise sexually, to get roles. My self-love told me I was worthy and should go with the flow—I would get roles when the time was right.”

“How did a young person like you gain such a liberating insight?” I probed.

She said, with the utmost clarity and conviction, “I have been living alone for the past few months. I chant daily. In the silence, I got in touch with my Self. I developed a strange sense of security: everything was fine and would always be so.”

Patiently answering my fourth question, she revealed she was chanting the Aditya Hridayam and the long Gayatri mantras.

Chanting to overcome depression
My work involves a lot of interaction with people. Very often, people open up and speak about personal challenges. Over the years, there are two recurring issues that keep cropping up: relationship failures and depression. While speaking to acclaimed psychiatrist Dr Satyakant Trivedi, I was shocked to learn that a sizeable portion of his patients, today, are students and youngsters on college campuses. Dr Trivedi mentioned drug and alcohol abuse, broken families, and painful incidents from the past as some causes for triggering depression.

A close friend’s daughter, in Bhopal, was being treated by Dr Trivedi for depression. My disturbed friend consulted a well-known Vedic astrologer in Delhi, for her daughter. He recommended that she should contact the Maharishi Vedic University in Bhopal and have japa chanting done by trained Vedic priests for her daughter’s mental health and overall welfare. My friend approached the Maharishi TM Centre in Bhopal, which was extremely helpful. They recommended chanting of certain mantras for a certain number of times, based on her daughter’s astrological chart.

A Vedic mantra-chanting ceremony, conducted by 21 priests, was organised in the pristine and beautiful environs of the Maharishi Vedic University, Bhopal. My friend said her 19-year-old daughter took the chanting very seriously since she badly wanted a cure for her depression and was sincerely grateful for the effort to cure her. She did not get up even once during the three-hour long Vedic-chanting ceremony. Consequently, she started feeling significantly better in some months and is now leading a normal life on campus, energetically involved with several extra-curricular activities.

Aum, Yogananda, and my experience at Isha Centre
My Master, Paramahansa Yogananda, taught a unique Aum technique. It involves listening to the various manifestations of Aum in the seven chakras, by closing the ears and shutting out external sounds. Master explained that just as a rotating motor emanates a sound, similarly, Aum is the sound of the Universe in motion. Since the Universe emanates from God, Aum is one of the attributes of God Himself. He recommended connecting to God by daily, silent absorption in Aum and, finally, offering prayers in Aum, manifesting as the roar of the mighty ocean, above the Vishuddhi Chakra.

Through Master’s grace and a diligent following of his advice, I have enjoyed good physical and mental health over the past 30 years, including an easy-breezy, problem-free delivery of my two children. If I am not practising the Aum technique or am not tuned in to Aum, I feel a great vacuum.

Recently, while on a visit to the awe-inspiring Isha Centre in Coimbatore, it felt wonderful to have my Aum practice validated. I attended an Aum initiation session in one of the beautiful mud huts at the Centre. The Acharya showed us a video of Sadhguru stating that he has cured thousands of depression patients by teaching them the Aum technique. Sadhguru’s Aum technique is intonated aloud, is freely available on YouTube, and can be practised online, along with Sadhguru himself.

The enchanting flute
Last year, I read somewhere that during every Janmashtami, Sri Krishna manifests on earth at midnight and does the famous rasleela (dance) again, with His gopis (cowherds). If anyone stays awake at midnight and remembers Krishna, that person too is embraced by Krishna. This resonated deeply with me, and I stayed awake well past midnight, chanting the Mahamantra and listening to the Hare Krishna dhun (melody) on the enchanting flute.

I couldn’t help but notice that I had an extremely happy and joyous year after that Janmashtami, filled with laughter, companionship, and the amazing support of colleagues. Krishna is playful and He is melting love, and that was exactly how I felt the entire year. I felt the Lord also gave me a very sweet sign of His confirmation when a team from ISKCON, Mumbai, which was visiting Mayapore, called us and came over to our office in Kolkata. They sang, danced, and did sankirtan (devotional songs) in our office. They gave us a motivational talk on seven principles that can keep us happy. They urged our colleagues to dance with gay abandon during the kirtan.

The ISKCON visit to our C-Quel office was unique and exhilarating. One of our colleagues, who had a suspected kidney problem, had a miraculous experience. He said that after dancing vigorously during the sankirtan, his pain vanished and has never come back since then. Tests showed that the suspected kidney problem did not exist. Another young girl, recently divorced after only nine months of marriage and going through severe mental trauma, also had a transformative experience. She felt the negativity simply melt away. Happily, within a few months, she met a nice and caring young man who had also gone through a divorce, and the two decided to get married.

George Harrison survives a plane crash
In an interview, the famous Beatle, George Harrison, was asked if he could think of any incident where he felt God’s presence very strongly through chanting. This was his response:

Once, I was on an airplane that was in an electric storm. It was hit by lightning three times, and a Boeing 707 went over the top of us, missing by inches. I thought the back end of the plane had blown off. I was on my way from Los Angeles to New York to organise the Bangladesh concert. As soon as the plane began bouncing around, I started chanting Hare Krishna, Hare Krishna, Krishna Krishna Hare Hare; Hare Rama, Hare Rama, Rama Rama, Hare Hare. The whole thing went on for about an hour and a half or two hours, the plane dropping hundreds of feet and bouncing all over in the storm, all the lights out and all these explosions, and everybody terrified. I ended up with my feet pressed against the seat in front, my seat belt as tight as it could be, gripping on the thing, and yelling Hare Krishna, Hare Krishna, Krishna Krishna Hare Hare at the top of my voice. I know, for me, the difference between making it and not making it was actually chanting the mantra. Peter Sellers also swore that chanting Hare Krishna saved him from a plane crash once.

The interviewer went on to ask George Harrison whether there was any difference between God and His name. There was another stellar response from Harrison:

It takes a certain amount of time and faith to accept or to realise that there is no difference between Him and His name, to get to the point where you’re no longer mystified by where He is. You realise after some time, “Here, He is right here!” It’s a matter of practice. So, when I say that I see God, I don’t necessarily mean to say that when I chant, I’m seeing Krishna in His original form when He came five thousand years ago, dancing across the water, playing His flute. Of course, that would also be nice, and it’s quite possible too. When you become real pure by chanting, you can feel His presence and know that He’s there when you’re chanting.

You don’t get it in five minutes
Like developing any other skill, chanting is not an instant process. It takes some time and a keen awareness if you have an open heart to cultivate a love for it. Many people, for instance, find the Aum chanting or Aum meditation boring. Swami Shantananda of Yogoda Satsanga would say, “Even if the practice is mechanical, stick to it. Don’t give up on it. Just do it!” With patient practice and faith in the testimony of the Masters, there comes a time you can’t do without your mantra chanting; it becomes a pillar of support, a friend in need.
According to George Harrison, once he chanted the Hare Krishna mantra, nonstop, all the way from France to Portugal. He drove for about twenty-three hours and chanted all the way. He said that he didn’t even know where he was going, he couldn’t speak French, Spanish, or Portuguese, but none of that seemed to matter. He added that once you get chanting, things start to happen transcendentally; you start feeling invincible!

By chanting the names of the Lord and you’ll be free
The Lord is awaiting on you all to awaken and see.

So, chant and be happy
Paramahansa Yogananda said, “Chanting is half the battle!” I remembered this, as we sat, silently and reverently, in Srila Prabhupada’s room, at the ISKCON Kolkata centre. Srila Prabhupada, the great advocate of Krishna Consciousness, took the whole world by storm when he was an old man in his seventies. The spiritual force generated by his lifetime of japa sadhana (chanting practice) was truly earth-shaking. The whole world sat up and took notice of this frail, old man from India, who spoke with great conviction of the power of the Mahamantra to heal the world and make it happy.
Recently, a young musical group, Madhava’s Rock Band, is taking YouTube by storm, with its fervent, devotional, and passionate renditions of kirtan. For me, personally, the group dynamics of chanting are enormous. It’s like the group becomes one giant ball of energy, knocking on the door of the Lord and making him sit up and take notice.

I chant with YouTube bands, with great Swamis, and the great Srila Prabhupada on YouTube, and my spiritual intent is always strengthened by the group effort. Chanting the Hare Krishna mantra, my all-time favourite, 108 times with Srila Prabhupada, as per the Hindu tradition, takes only 11 minutes of my time. This, followed by four minutes of chanting the long Gayatri mantra (also available on YouTube) in the chakras, has blessed me with inspiration, enthusiasm, protection from negative forces, and success in my creative efforts. So, chant and be happy!