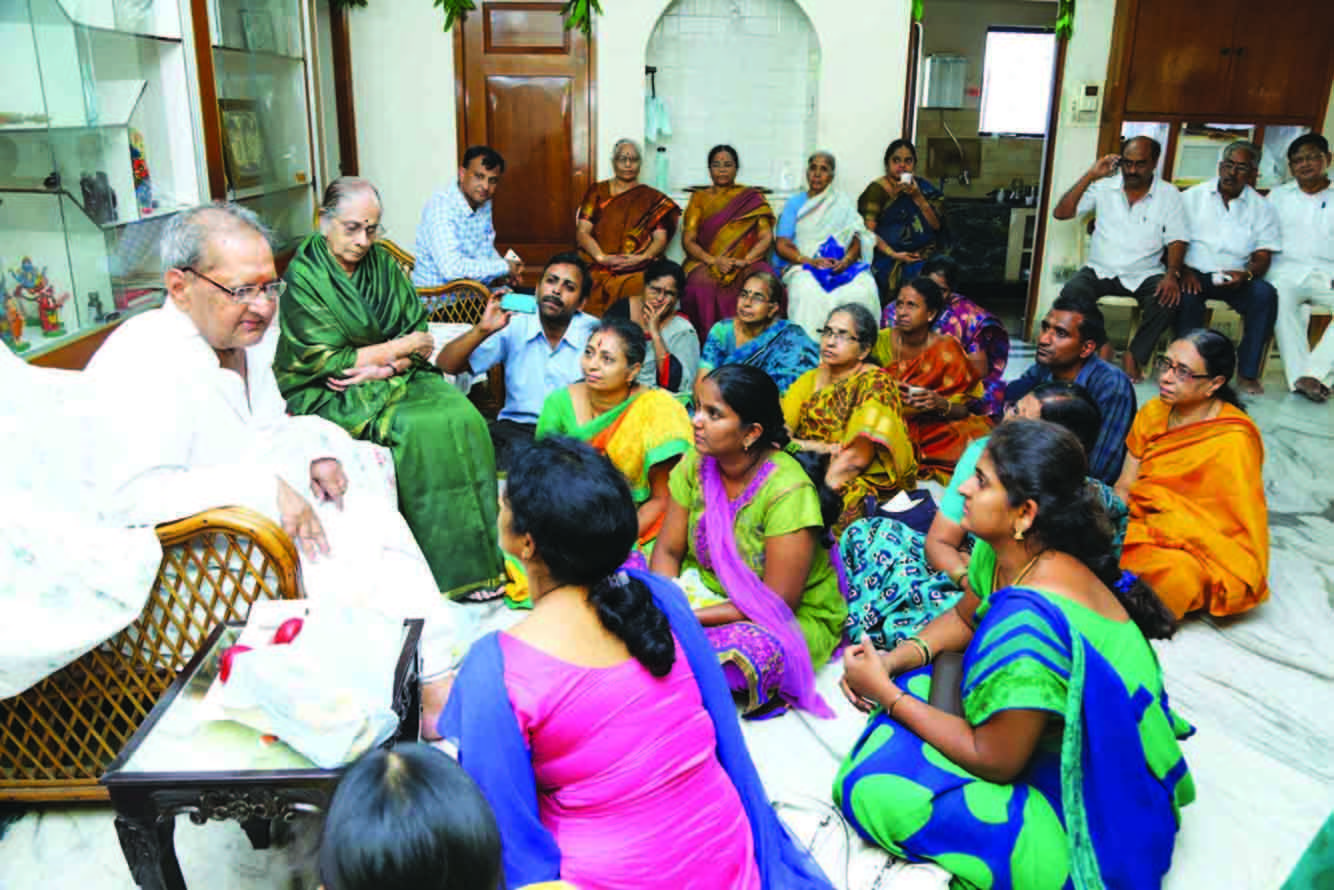 EVERYTHING HAPPENS IN ITS OWN TIME

This is the last interview—conducted by Pradeep Krishnan—that Shri Nanna Garu (revered father in Telugu), an enlightened master in the tradition of Sri Ramana Maharshi, had given to any media, electronic or print, before his mahasamadhi on December 29, 2017.

The spiritual journey of Shri Bhupatiraju Venkata Lakshmi Narasimha Raju, born on September 23, 1934, in Jinnuru, West Godavari of Andhra Pradesh, leading to his becoming Nanna Garu, adored by hundreds of disciples, is quite interesting. At the age of 23, Sri Ramana Maharshi appeared to him in a dream, completely transforming his life (see box) and paving the way to his attaining self-realisation ultimately at the age of 48 in Tiruvannamalai, Tamil Nadu.

As the 83-year-old master’s health was not conducive to giving an interview, several times, the date had to be postponed, and Nanna Garu remarked, “In what manner, how and when something is to be done, it happens exactly in that way. One should not be in a hurry. When that time comes, without will or wish, that thing gets done.”

Finally, that day happened about six months back in a devotee’s apartment in Vijayawada, Andhra Pradesh, thanks to the untiring efforts of Dr Usha, a Hyderabad based dentist and a close disciple, who had been Nanna Garu’s constant companion for the past 26 years.

Dressed in a spotless white dhoti, shirt, and angavastra (cloth worn over the shoulder), Nanna Garu majestically walked into the main hall of the apartment where around 50 devotees were eagerly waiting to have his darshan, for their Guru and father figure leaves no one dissatisfied; he gives peace and guidance, spiritual instructions, and advice for dealing with life’s challenges.

The dress, the walk, and the face reminded me of my late thatta (maternal grandfather). At once, I felt very close to him and sitting on a sofa, holding my hand, he answered all my questions, one after the other. Often, he repeated the answers to Dr Usha to make sure that I had grasped them correctly. While responding, his eyes sparkled, and his words were vibrant, reflecting his soft demeanour.

Even today, many months after that eventful day, I can still feel the intense devotion in the eyes of those devotees, their ears keen to catch every word, reminding me of the glory of our rishi parambara.

How did you come to the spiritual path?

In March 1954, my grandmother and I went to Rishikesh and met Swami Sivananda. Swamiji had blessed me, saying “Be good and do good.” He had also said, “Being good is very difficult than doing good, as to practice Karma yoga, you will have to live in universal consciousness.” In the same year, on our visit to Benares (Varanasi), I was very much attracted to the spiritual atmosphere there. We had stayed there for about nine days. I was greatly influenced by the mighty Ganges as well as the Kashi Vishwanath Mandir, the temple dedicated to the Lord of the Universe. Slowly, spirituality entered me and one day, in 1982, while I was sleeping in the Morvi Guest House of Sri Ramanashram, I realised the Truth.

How did you get attracted to the teachings of Sri Ramana Maharshi?

Though I have never met Sri Ramana Maharshi, I have had several experiences. In 1957, in a dream, I saw an old man with sparkling eyes. After six months, while I was sitting at home and reading a newspaper, an advertisement, 'some great sons of India,' announcing the publication of 10 pamphlets (each costing four annas) on the life of mahatmas, including the life of Sri Ramana Maharshi, caught my attention. As the photo shown in the pamphlet was that of the same old man whom I had seen in the dream, I instantly felt thrilled seeing the picture, and my whole body shivered. I immediately ordered the pamphlet and months later, I got the book, Self-realisation written by B V Narasimha Swamy from Ramanashram. After reading the book, my interest in the teachings of Sri Ramana deepened. In January 1959, I visited Sri Ramanashram for the first time and stayed there for three days. Coming back to Jinnuru, my native place, I decided to dedicate my life to spreading the teachings of Bhagavan Sri Ramana Maharshi. Soon, I started touring all over Andhra Pradesh, delivering speeches about Sri Ramana. Thereafter, I used to visit Tiruvannamalai every year and did girivalam (circumambulation of Arunachala mountain, which is considered as Lord Shiva Himself) and got myself charged spiritually. On one such occasion, in 1982, while I was sleeping in the Morvi Guest House, I had glimpses of the Truth.

As that wonderful experience was very subtle, I am still not able to define it. I was semi-conscious and felt my Sahasrara chakra opening. Immediately, I was completely immersed in absolute bliss. Before that, I had never experienced such bliss all around me. I considered it the grace of Bhagavan Sri Ramana, and I became His child. From that moment, my life completely changed. What I felt within, I started spreading to all those who came in contact with me. Soon, people—even from abroad—with difficulties and sorrows, started visiting me. I consider that it was the culmination of what I had acquired from my previous births. After Ramana came into my life, I began to love human beings; I became humanitarian and started doing a lot of social work. In fact, I became a complete man.

What should one do to remain in Bhagavan Ramana’s consciousness?

Love him, adore him and merge into His love; you will have universal consciousness. By understanding the simplicity of his teachings as well as his life, one can feel Bhagavan’s presence. According to Sri Ramana, nobody is in bondage. Find out the real ‘I,’ and realise the one all-pervading consciousness. That is the only way to freedom. To me, his teachings are original as he had opened a way for humanity to merge Jnana with Bhakti. If one reads Ramana’s words with one’s heart, love will definitely blossom within.

What according to you is God-realisation?

What is your core teaching?

All must remain in a sorrowless state, which cannot be purchased from the market. That state will happen only through enlightenment. Then automatically, peace and positive vibrations will emanate from you. For self-realised souls, there is no ‘I’. Hence, everything will come to them: peace, happiness, and joy. My core teaching is that one has to dip in Jnana Ganga (The river of knowledge) to get salvation.

What is the cause of sorrow?

Every thought, good or bad, created by the mind is the cause of sorrow as it takes you away from God. Only by spiritual surgery, one can get rid of sorrow. How to do the surgery? While Sri Ramana asked us to probe the ‘I’ that is having the sorrow, Sri Ramakrishna advised us to look into the cause of sorrow. When the mind holds on to names and forms, it results in attachments that pave the way for sorrow. One can get rid of attachment only by surrendering to the Almighty or by self-inquiry. Even after realisation, thoughts will come, but it will not bind one.

How far do rites and rituals help one in spiritual life?

They are only tools to make the mind disciplined. The purpose is to do mano nigraham (control over the mind) and thereby achieve indriya nigraham (control over the senses). Done with involvement, it helps in purification of the mind and body. To some extent, they are important as it helps in getting physical and mental fitness. Rituals by themselves are not the goal.

Your message to readers?

Understand that one’s welfare is ingrained in everyone’s welfare. Compared to the past, life today has become more stressful. A peaceful mind is necessary to lead a happy life. Our words and deeds should lead our fellow beings into the path of peace and thereby, bestow them with bliss. One should not waste one’s precious time in vain thoughts and actions. One must offer all one’s work to God. Be aware that spiritual progress is as important as material prosperity, and a life devoid of self-knowledge is fruitless as it does not give one liberation.