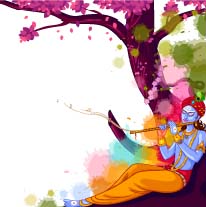 THE SONG OF KRISHNA

When Anuradha Iyer sought the Bhagavad Gita’s help to overcome difficult life situations, she felt personally held by Lord Krishna, who patiently revealed the real meaning of its verses to her

It was in the year 2006 that I picked up the Bhagavad Gita to read it seriously and try and understand what Shri Krishna was trying to teach Arjuna and all spiritual aspirants. Before that, I used to read it once in a while, but it had not made much sense to me.

How can one be equal in pain and pleasure, honour and dishonour, joy and sorrow, victory and defeat? How can we see all creatures as same when we are attached to our loved ones and repelled by people who bring us down? What is the Atman which cannot be cleaved by weapons, burnt by fire, wetted by water, and dried by air? Why can’t I see the Atman, touch it with my hands, or hear it with my own ears? Why is it beyond the reach of my senses? I could not answer these questions in the early days of reading the Bhagavad Gita, as I had not plumbed the depths of this great Hindu scripture.

I had kept the Bhagavad Gita in my pooja room (home altar) and worshipped it and prayed to it, like all the other idols in my altar, but understanding it was still a distant dream. Nevertheless, I trusted Krishna and intuitively knew that He would make the meaning of the shlokas (couplets of Sanskrit verse) clear to me when the time was right.

Understanding starts to dawn
When I picked up the Bhagavad Gita in 2006, it was a different phase in my life. I was defeated, depressed, and at my lowest. Nothing seemed to make sense to me anymore, similar to Arjuna’s condition in the battlefield of Kurukshetra. I wanted answers to my questions and solutions to my problems. And I intuitively knew that no one but Krishna had all the answers.

I began to read the Bhagavad Gita, one shloka at a time, one chapter at a time, slowly and painstakingly. It was as if Krishna was standing in front of me and I was kneeling down at His Lotus Feet, talking with Him one on one. I would read all the time and talk to Him when not reading.

Krishna is very compassionate; otherwise, we would be floundering for many births in total darkness, without a clue as to where we were heading. When Krishna holds our hand He leads us safely out of the bondages of this difficult and complicated world.

Some useful lessons
I gleaned many insights from the Bhagavad Gita, some of which are shared below:

You grieve for those who should not be grieved for, yet you spell words of wisdom. The wise grieve neither for the living nor for the dead. (Chapter 2, Shloka 11.)

There is absolutely no reason to grieve, neither for the living nor for the dead because this whole existence is not real. It is all His leela, His sport, His game, His movie, and He is the director, producer, and all the characters in this movie. We appear to exist as individuals with our specific roles, but that is only an appearance. In reality, only He exists and He exists as all of us. The fact is that there is no one but Him. So what is there to grieve for? Where are all our problems? Only in our minds.

The Atman is neither born nor does It die. Coming into being and ceasing to be, do not take place in It. Unborn, eternal, constant, and ancient, It is not killed when the body is slain. (Chapter 2,
Shloka 20.)

It is Krishna who is Atman, the Light of Consciousness who is inside all of us. He does not die, nor is he born. He is constant, eternal, and ancient and remains so. There are no ups and downs in Him. He is the only One.

What, O Keshava, is the mark of the man of steadfast wisdom, steeped in samadhi? How does the man firm in wisdom speak, how does he sit, how does he walk? (Chapter 2, Shloka 54)

Arjuna asks Krishna this meaningful question in Shloka 54 of the second chapter and the concluding eighteen shlokas of this chapter are devoted by Krishna to answering this one question.

When a man abandons, O Partha, all the desires of the heart and is satisfied in the Self by the Self, then he is said to be one stable in wisdom. (Chapter 2, Shloka 55)

When a person knows that it is the Self alone who is everything and everyone, a man becomes desireless and is satisfied only in the Self. Such a person is stable in wisdom.

He whose mind is not perturbed by adversity, who does not crave for happiness, who is free from fondness, fear, and anger, is the muni of constant wisdom.(Chapter 2, Shloka 56)

A man who knows reality knows that all things happening to him and those around him are in Krishna’s hands. Therefore, they are the best possible events, even if they appear adverse in nature. Such a man is not perturbed by adversities. He who does not crave for the transitory happiness of this world is a man of steadfast wisdom. If he trusts Krishna, he will be free of fondness (fondness for some and hatred for others), fear, and anger. Such a man is a muni (sage) of constant wisdom.

There are 18 such shlokas, and each one is a delightful explanation of the qualities of a man of steadfast wisdom. If one reads these shlokas, keeping in mind the broader reality that Krishna is All there Is, then it all starts making sense very magically.

Karma Yoga: Dedicate all actions to Krishna, understanding that you are not the doer. Give up all doership and be free from the effects of karma.

Bhakti Yoga: Be devoted to Krishna and worship Him all the time with one-pointed focus, loving Him as we love all our loved ones. Loving only Krishna is so much more beautiful and joyful.

The last shloka of the eighteenth Chapter in the Bhagavad Gita sums up Krishna’s message beautifully:

Renounce all dharmas and take refuge in Me alone. I shall liberate you from all sins; grieve not. (Chapter 18, Shloka 66.)

“Surrender to Me and I will liberate you from all sins. Surrender to my will and you will be liberated,” says Krishna. The state of self-surrender or the act of taking refuge in the Lord achieved by the Karma Yogi, the Bhakta, and the Gyani is one and the same. The Lord is defined in three different ways, governed by the characteristics of the paths. The Karma Yogi merges himself in the Sat (Truth) aspect of Reality; the Gyani (the wise), in the Chit (Consciousness) aspect; and the Bhakta (devotee) blooms in the Ananda (bliss) aspect. When the Jivatman (individual soul) identifies itself with the Paramatman, (the Super Soul) it is purged of all sin. It is freed from individualised consciousness and is fixed in the Cosmic Consciousness which is without any beginning or end. It becomes immortal. It is bliss and beatitude. Grief has no place in this state of blessedness. There is no darkness of ignorance. Brahman is Sat-Chit-Anandam. On renouncing the mind, what remains of the Jivatman is Brahman. Krishna’s teachings become lucid to all the aspirants who take refuge in Him and seek enlightenment from Him. Self-surrender ultimately leads to the union of the Jivatman with the Paramatman.

How life changed for me
After I started reading the Bhagavad Gita, I went through various experiences. The learning kept happening in phases. Sometimes, there were lows and, at other times, highs. The main thing was inner relaxation and peace which descended on me as I kept reading. Krishna was always there to clear my doubts and explain things to me very patiently. He never left me even for a moment, and I came to rely on Him completely, feeling safe and protected. The fear of the unknown left me because I know that everything is always in Krishna’s hands and He would never let me down. My life kept changing in small ways every few days. The weeks turned into months, and months, into years. Krishna was, and is, always with me. Now I am more relaxed and less worried, totally surrendered at His Lotus Feet because nothing is ever in my control. It is all His will, and His will is always the best. I wrote my first book on my spiritual journey, Krishnapriya, in 2016. And now I am at the threshold of releasing my second book. Life is one song of gratitude to my Lord, my darling Krishna. Every breath is His mercy, and I live only to spread the message of His Love.