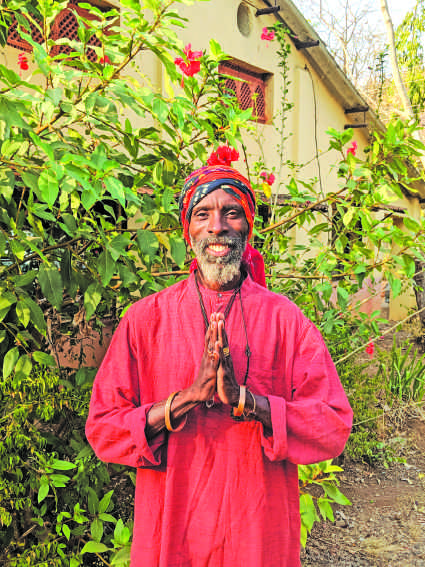 Feeding off breath
Breatharian Elitom El-amin talks to Rishi Rathod about the ancient art of sustaining body, mind, and soul on nothing but breath

There is something yogic about Elitom El-amin. He is calm, collected, and has a ready smile. His quiet energy builds up a sense of expectation. It brought siddhis earned through yogic effort to my mind. I met Elitom in Ghatkopar, a crowded suburb of Mumbai, at the home of his student Bhavin Shah, who himself is a trainer and spiritual guide.

Elitom El-amin was dressed in a violet chola and thin pyjama, a thin turban-like cloth over his head, and a few lockets hung on his long thin neck and a grey-black beard. He had a deep, powerful, and zestful voice that has a mesmerising effect on his listeners. He loves to talk and keeps peppering his speech with statistics and anecdotes to illustrate his point till people tell him that they understand what he is saying.

I know of fruitarians, vegetarians, and even eggetarians. What on earth is a breatharian?

There are many other words people use for living on prana. There is an inanimate energy present in the air that can be accessed through our breathing. Different ancient cultures have called this energy differently. In India, it is called prana; in China, chi; in Japan, ki; and in Africa, ka. These cultures knew about this energy present in the air which animates things. The term breatharian comes from the ancient word ‘anedia’ which means to eat very little or none at all.

Please share something about how you began your journey?
When I was young, I was eating the typical processed American diet. I was overweight, lethargic, and sick most of the time, and had no clue what health meant. I knew this could not go on for long and was looking for a solution. I came across a person who was part of the Hebrew religious group. He explained to me the importance of vegetarian food, little exercise, and meditation. I resonated with what was said and experimented for a couple of weeks. I was surprised to see that by merely eating vegan  food I was a changed person. I lost all my extra weight and got in shape with a bit of exercise and meditation. Gradually, by consistently doing meditation and fasting, I started feeling extremely light in the head and body. My cousins were still overweight; they were going to church and praying to God to reduce their weight.

To further explore what is possible, this religious group was organising a 21-day intensive retreat. I was told that at the end of the programme,one will be in a position to decide if one wants to eat food for living or not. One would be able to live on breath alone after the completion of the programme. Living from this space is completely different and unimaginable to most of humanity.

I could not attend the retreat as I had no money and had just got married. Leaving my wife for 21 days and taking off from work for that long was not possible. I was fasting once a week according to the earlier programme they had taught. I was doing it consistently and reaping its benefits. So now I decided to fast two days a week and stayed with it for some time. My energy remained constant, and I was feeling much lighter. I continued like this for some time, and from a two-day fast a week, I gradually moved to a three-day fast, and finally, to no eating. It was a slow and long process, but I arrived at what they were talking about. The journey was not completely smooth; there were rough patches on the way. The urge from biological memory was too strong and I went and ate sweets sometimes, but I kept on consistently doing my meditation and fasting. Earlier, for my primary energy needs, it was the intestines first and then the lungs. Now, after the shift, it’s the other way around.

In what ways has life changed for you since you become a breatharian?

I feel absolutely light and clear in my head. This is the best way of living for me at a time when all our air, water, and food have become polluted. Humanity is suffering so much due to this adulteration. It’s really difficult to explain this experience, how great I feel. I can just suggest but can’t explain the feeling.

It has been 19 years now that I have not depended upon food for my survival.

Are you saying that you have not consumed food or water for 19 years?

It would be incorrect to put it that way. During a recent Thanksgiving ceremony at home in the US, I had to take a bowl of soup just to avoid explaining to my aunts and other people about how I live. Before coming to India, I had attended a family birthday party; I took juice there. When my son was small, I was feeding him many times. So on weekends, I used to take some food. But this was just to show them that I was normal—and indeed I am!

How have the secrets of breath that you have learned on your journey helped others?

Yes, my journey has helped several people in different ways. There are students who tell me that they have gone without food for three to four days by living on breath.

People come to my retreat to learn from me. I talk to them one-on-one and educate them about what is possible. Most people who come to the retreat are actually desperate to heal themselves, but they are not listening. Many are on medication. Just to make them feel grounded, I even eat with them. I gradually start working on their energy and teach them to do meditation consistently. Later, after a few weeks, I get to know that they have stopped their medication. I know someone with blood pressure issues who is normal now.

How can our readers take their first step towards becoming breatharians?

This may sound weird, but there is no secret. If it’s a secret, then you are not allowed to know about it. When I was learning, all the knowledge was available to me and I persistently followed what I was taught.

The truth was and is always there. It is an understanding that must be developed and backed up with consistent action over a period of time to see the results.

Those who have accessed the prana, have realised that you don’t really need food to have energy. There are other sources of energy available to us. Just like using solar energy after having used coal, oil, and electricity. And the beauty here is if you are consuming prana while talking or doing other tasks, then it almost replenishes itself within a few moments.

Spiritually speaking, do you think you have arrived or are you still on the path?

I operate out of absolute clarity in every moment. Since there is nothing to clog my mind and body with any adulterated material, I see everything clearly and naturally. There are no desires or thoughts that bother me. Whatever I want comes to me, whether it is information or material. Years of meditation too has helped me channelise and cleanse the energy (prana) in my body.

Would you say that you operate or vibrate on a different level than most people you come in touch with? How does that impact you or them?

Good that you asked this question. I do operate or vibrate on a different level but not necessarily on a higher level as perceived by many. There is a certain wellness and equanimity that gets exchanged between me and the person. It is easily felt if the person is open and receptive. This has happened countless times with me. Note that I don’t enter anyone’s personal space. Healing happens if the person is in surrender.

Do you have plans to expand your work in India?

The mission is to travel around the world to educate people about how living like this is possible if we consistently do meditation, fasting, and some yoga. I was doing a retreat in Egypt, and a group of people approached me to do the programme for them; they were Indians. One thing led to another, and here I am in India. People here are so full of life. I wish to come here more often. I am doing two or three retreats on  the outskirts of Mumbai in April.

There are 1.2 billion people living here. I want to ignite a fire of transformation that will not only benefit a small group but affect the masses. We are not separate. We all live in this sea of energy, and all of humanity can benefit from this.

I didn’t meet anybody living on prana even though everybody in spiritual circles talks about it. In China, people talk about chi,but who is living on it? In Africa people talk about ka, but who is living on it? It is because we went into another direction the external, the material. It has overwhelmed everybody. Knowingly or unknowingly, we became a part of the rat race. But now, things are changing gradually. This generation is ready to make the right move. We all are ready to go deeper into ourselves.

Not only will it bring change in a person at an individual level but will start impacting us collectively as more and more people become aware of this phenomenon.

This is my work. I am here to promote, speak, and educate people on this.