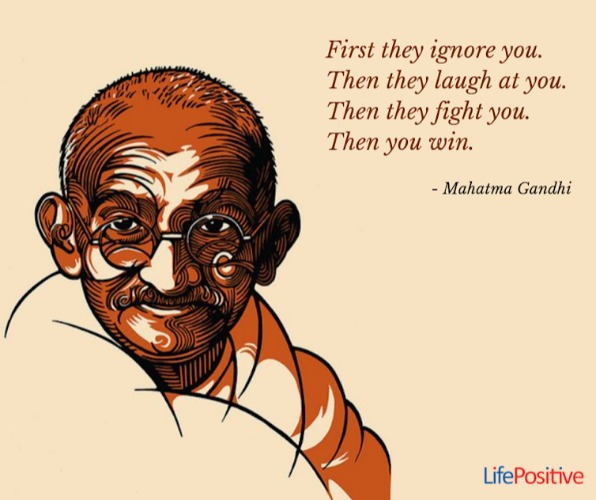 In the Footsteps of the Mahatma

Tushar Gandhi, the Mahatma’s Grandson and organizer of the recently concluded Dandi march is a transformed man today.

Within the first two days itself, I developed blisters on my feet, and my feet burned when I walked. After walking seven to eight hours a day, I had to go up to a stage and speak to the villagers. So often, I would fall asleep in front of hundreds of people. But even in my bleakest moments, I knew I couldn’t give up. If I did, what would happen to the others?’

It’s not easy to emulate a legend but when Tushar Gandhi, grandson of the Mahatma, re-enacted the historic Dandi march recently, the spirit of satyagraha and sacrifice once again walked abroad.

Seventy-five years ago, when Mahatma Gandhi and 100 other satyagrahis marched the 240-mile journey from Sabarmati to Dandi to disregard the provisions of the Salt Laws, they opened the doors to India’s freedom from British Rule. Tushar Gandhi and his 2,000-strong army may not have felled an empire, but the march did awaken millions across the world to the lofty ideals the Mahatma stood for. For hundreds who participated, it was also a deeply felt expression of their own allegiance to these values. Tushar says, ‘The march was aimed at reminding people of the significance of non-violence. People seldom realize how difficult it is to stand up against an armed person, unarmed. It presents a true challenge. To go to war and fight, just like America did recently, is easy, but that achieves nothing but lost lives.

‘ We called it the ‘International walk for peace, justice, and freedom,’ highlighting Gandhiji’s belief in purn swaraj, freedom of choice, freedom from oppression and freedom of the girl child.’

The constant media attention focused on the event, the lakhs of people that flocked to the streets when they marched through the cities and the warm welcome they received from villagers, proved to be exhilarating. ‘It’s amazing how warm the villagers were, and how easily they made us feel at home. In the scorching afternoons, they would come out of their houses, just so we could take a nap without being bothered by the sun. They always welcomed us with garlands, chaas, and other refreshments,’ marvels Tushar.

For each pilgrim, the walk proved to be a highly spiritual experience. Remarks Tushar, ‘Considering my weight, I was unsure if I would be able to make it through the 23-day long walk. But as days passed, my willpower strengthened. In the end, I only survived on the sheer power of my mind. And quite remarkably, even to my surprise, I made it to my goal.’

Accomplishing the goal through such strenuous effort was a powerful experience. He says, ‘In the Dandi March led by Gandhiji, three generations of my family had marched. When I reached Dandi, I felt I had completed a family legacy; a sense of pride enveloped me. It was such a personal and overwhelming experience that at that moment I wanted to be alone with my family. Yet, I had to fulfill my obligations to the media.’

He reminisces, ‘The most incredible feeling was the way the villagers worshiped me like a god. One villager actually came up to me and vowed never to smoke again. Considering my own personal shortcomings, it felt strange to be worshiped as someone superior.’

Hot, uncomfortable nights spent on hard floors, followed by awakening at 4 a.m. and scouting for water so that 500 other people would not be deprived, have made him a stronger person and leader. ‘There has obviously been a change in me, but it’s too early to realize the change. The obvious change is the weight I’ve lost. Other than that I’ve become more organized, focused and committed. I’ve realized the importance of sacrifice. But more importantly, I’ve realized that when the body gives up, you can survive on will power. I now know that if you push yourselves towards achieving something you believe in, something you are passionate about, you can. Finally, I realized the importance of not giving up, merely because other people were dependent on you,’ says Tushar.

The march sought to establish India on the world map as a nation that contributed to peace and also revive people’s interest in Gandhian principles. Says Tushar, ‘Around the world, there has been a resurgent interest in Gandhi and his principles of non-violence, but sadly, the people of India tend to take for granted their own hero.’ It was also aimed at letting the less privileged people of the world know that someone cared for them, someone believed in fighting for their cause. It brought together people from diverse cultures and countries, all of who were walking with a common purpose, towards securing justice, freedom, and peace for oneself and others in the world. A motley crew united by an uplifting vision of life.