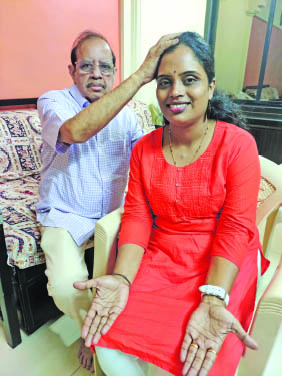 For a week, every evening during tea breaks or after office hours, two SBI bank employees—a boss and a subordinate—would mysteriously disappear. It transpired that they would quietly enter a small bank record room where vouchers and registers were filed. Together, they were experimenting on something that was only known to them. On their fourth day, much to their own happy surprise, the miracle they were attempting to bring about happened: Narendra Kumar Navghare (the boss), who was diagnosed with ganglion (a tendon sheath disorder), was healed through touch by Mohan Joshi (the subordinate).

It was this healing that marked the birth of renowned healer Mohan Joshi’s remarkable journey.

Mohanji was working with the State Bank of India in Akola, Maharashtra, and had gained a small but enthusiastic following as an astrologer. To build on this foundation, he moved to Mumbai. He did not know at the time that Mumbai would forever put to rest his dream of becoming a renowned astrologer, but would, instead, turn him into a renowned healer.

How it began
A few weeks before this experiment with his boss, Mohanji, an aspiring astrologer, was referred to a doctor from Bombay Hospital, for whom he was drawing a horoscope. They hit it off well and soon became good friends. The doctor, who also practised alternative healing as a supplementary modality, declared with conviction that Mohanji was himself a born healer. Cautiously sceptic, he asked the doctor politely how he should proceed to become the healer that he already was from within. The doctor friend told him that he could heal just by using his hands. In the 1980s, when reiki or pranic healing had yet not commenced in India and no one had heard about healing by touch, he couldn’t conceive that by merely touching, he could heal someone.

Mohanji managed to heal his boss, Navghare, in that small room in two months, and though he himself was amazed, he was not fully convinced. He started looking for more patients to heal. To further explore the truth behind it, he went out of his way to find people with diseases. Mohanji told one of his social worker friends that he was ready to offer his healing for free if he could get a room. For two years, he worked out of the small room, healing around 50 patients (mostly textile workers) every day after office hours. It was amazing for him to see how he could heal patients suffering from arthritis, asthma, paralysis, spondylitis, epilepsy, migraine, sinusitis, tumours, and many such diseases whose names, he says, even he didn’t know. This gave him a lot of confidence to continue healing.

Gradually, by word-of-mouth publicity, people started flocking in. He started to travel outside Mumbai to other cities across India. At some point in time, his simple touch healing had gone viral. Before long, he was travelling to the USA and other countries to heal as well as to give talks on healing.

A landmark moment
In the late eighties, one day, he got a call from the late Dhirubhai Ambani (famous Indian business tycoon). Mr Ambani had had a paralytic stroke on the right side of his body. Mohanji took three months to heal him completely. Mohanji says, “This gave me a lot of publicity and was covered by many newspapers and magazines. After this, I cured the chairman of a leading hospital in Mumbai, Mr Mathuradas Samal, of sciatica.”

So, what is the secret of his healing touch?

Mohanji says, “Even I don’t know the secret. Maybe I am gifted.” He explains further, “Doing nothing is my technique. I simply put my hands on the patient’s head or spine, stop all my thoughts, and surrender to the Universe.”

People felt that his hands have some kind of heat. I took a healing session for the experience and found that his palms carry some heat like a warm water bag which one can feel even at a distance of a few centimetres.

He says, “There is no limit to diseases but healing is one.” He believes that where medicine stops his healing starts. He explains further, “I work as a forwarding agent, sending a request, then surrender in those moments for divine help that cures patients.”

Most people who approach him are those who have tried everything. “They come to me as the last resort. This is one of the reasons I take three to six months to heal them. Had they come earlier, I would have healed them quicker. And the beauty of this healing is that the disease never reappears. It heals them forever.”

Training time
I asked him if he can also teach people how to heal. He says, “I discovered healing through hands by chance, but I can assure you that with pure intention and practice, you too can heal.” He now trains people to heal and in experimenting with group healing. It’s only a day’s programme at his residence in Thane, where he teaches the principles of healing, but students have to practise at least for a couple of months to see the results.

He said that in healing, he has been successful most of the time, but he can’t go against nature. So older people don’t get faster results as they expect to. When the time comes, we all have to accept it.

A significant change came to his healing process when he read a book by Harry Edwards, which emphasises that if you want to heal, you have to abandon your mind. It was a turning point for him that completely changed his approach to healing. He was always trying to figure out the best way to heal. But after reading this book, realisation dawned upon him: He now just surrenders and asks for grace.

He says, “Unconditional love is the real capital in healing.” He informed me that he needs not more than five minutes to awaken the healing in the patient, and it doesn’t matter whether you believe in healing or have faith in him or not. It still works.

He has healed hundreds of chronic and critical cases where current medicines were unable to cure the patients. He discussed a few of them with me.

Healing difficult to heal ailments
One such case was that of Mr Yashwantrao Patil, an advocate and a member of the All India Congress Committee from Gulbarga, Karnataka. Mr Patil was suffering from a slipped disc and the leading orthopaedic doctor from Bangalore told him that there is no remedy for his problem. He even told him that he should resign and live with the problem for the rest of his life. Mr Patil was very discouraged by what the doctor had said. After returning home, by chance, he happened to read a magazine which carried an article about Mohanji. Unfortunately, the article only mentioned his name and that he is a State Bank employee. This was in 1997 when Google and smartphones were not commonplace. It took him six months to find Mohanji. When he found him, he asked Mohanji if he could heal him, as the doctor had said that there was no scope of curing his slipped disc. Mohanji said that he could certainly heal provided Mr Patil could have the required patience for six months.

Mr Patil started coming every week by train from Gulbarga, with an assistant, at the advanced age of 62. Six weeks into the healing, he complained that his son (an engineer) and his daughter (a doctor) were discouraging him from making this arduous journey every week. They were of the opinion that nothing would happen; just hand-touching can’t heal anyone. Mohanji replied that he could be healed that very day or in six months. Mr Patil, having no other choice, kept coming in. Surprisingly, in the 8th week, he got a lot of relief from pain and by the 16th week, he was completely cured of his slipped disc (a rare case).

He invited Mohanji to Gulbarga and, by calling a press conference, introduced him to people there. After this incident, they became lifelong friends.

Like this, he has hundreds of friends and well-wishers who have written about his healing hands on his facebook page: https://www.facebook.com/healinghelp/. When I went to meet him on behalf of Life Positive, I saw a Gujarati businessman from Surat, suffering from irritable bowel syndrome, who has been coming every week for the past month. According to Mohanji, he has healed more than 100,000 people so far and still continues to do so.