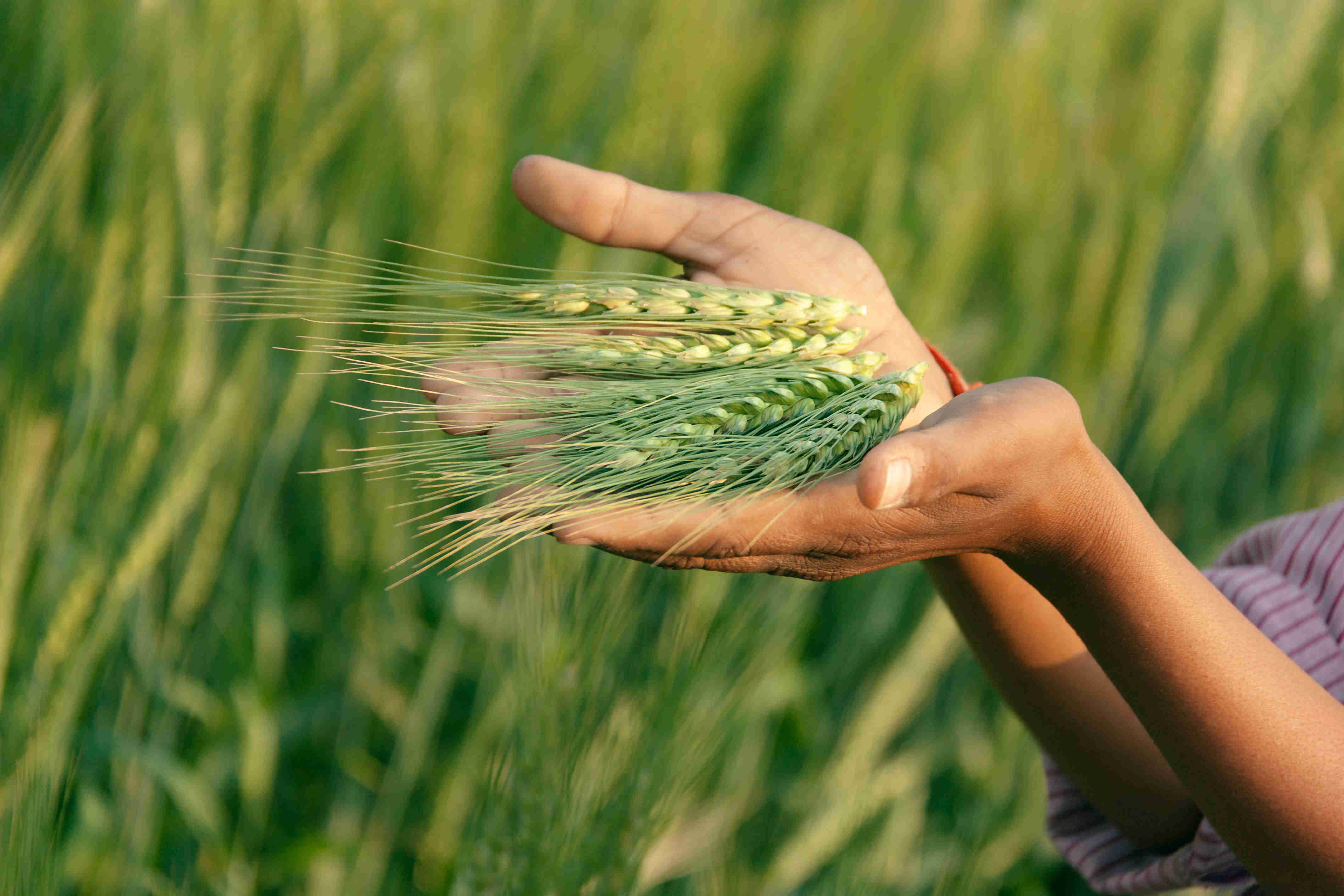 Call it sustainable yogic agriculture or cosmic farming, scores of farmers are being sensitised and empowered to adopt a holistic approach to cultivation, says Paayal Talvwaarr

Today, Gyan Singh Sandhu of Karnal district, Haryana, is a transformed farmer. So is Balaso Shripal Rugge of Ichalkaranji, Kolhapur, who cultivates cabbage, cauliflower, groundnut, and sugarcane along with many other crops on his farm. They both attribute their transformation to ‘yogic agricultural methods’ adopted by them and say they grow crops by instilling them with positive vibrations.

They are no maverick farmers. They know what they are doing and do it with utmost seriousness and intensity. And they are not alone. There are scores of farmers across the country, who are practising yogic farming. While this technique has its share of critics, at a deeper level, it rings a bell, given the level of pollutants and pesticides present in our farm produce.

“Prakriti hamare sankalpon ko pakadti hain. Jitni shubh bhavna se hum prakriti ko such denge, prakriti hazaar guna humein uska degi (nature responds to our vibrations and will respond a thousand times more if we give it positive vibrations),” says the 54-year-old Singh. Rugge nods in agreement. “We meditate during the amritvela (time of nectar) on our fields and intend that all our positive vibrations reach the crops!”

The concept doesn’t exactly force a vegetarian lifestyle, but farmers have opted for one. Those who consume non-vegetarian food do so within the confines of their home and not on their fields. Many of them have returned to traditional farming methods and are experiencing a growth in crop yield with this thought-based meditative practice combined with organic agriculture. “I get desi beej (local seeds) from the neighbouring villages and empower them through meditation,” says Sandhu who grows wheat and rice with the conviction that the crops respond to the positive energy. He swears by the phrase, ‘Live and let live’.

Sustainable Yogic Agriculture is a project that is being carried out by the Agriculture and Rural Development Wing of the Prajapita Brahma Kumaris Ishwariya Vishwa Vidyalaya in India since 2007. The organisation is headquartered in Mount Abu. Though the project was initiated by the Brahma Kumaris in 2003, the movement gained momentum in 2007, when the success stories began flowing in and the initiative was backed up with relevant data.

According to BK Raju, vice chairman of Agriculture and Rural Development Wing (ARDW), Brahma Kumaris, yogic farming is a process that utilises meditation to empower the seeds and develop the mind and heart of the farmer. Further, it promotes ancient spiritual practices such as Rajyoga meditation as well as integrated organic farming using cow products, crop-rotation, and integrated pest management. As farmers gain confidence, the impact they are able to have on their crops through meditation is much more than through organic farming.

How is it done?

BK Raju informs us that the seeds are placed in the meditation room, which could be either in a home or on the fields, where meditation is practised regularly.

Before sowing, the seeds are empowered through meditation for three–seven days, morning and evening, for 15–45 minutes at a time. Thoughts of peace, love, and strength are infused into the seeds by the farmer.

From then on, regular meditation is conducted in the fields and remotely as well, with specific practices designed to support each phase of the crop growth cycle. These include fulfilment of potential at the time of seed germination, love and encouragement during the growth phase, and gratitude and thanks when the harvest season approaches. In addition, placing a meditation flag in each field helps to remind the farmer to sustain the meditative practice during the day.

The Brahma Kumaris is not the only organisation promoting this concept. Shiv Yog India, led by Dr. Avdhoot Shivanand, raises awareness about ‘cosmic farming’ across the country through scores of Kisan Shivirs.

The project named ‘Shiv Yog Krishi’ is promoted as a New Age healing technique for crops and food. Videos of Avdhoot Baba Shivanandji addressing the farmers are shown where he initiates them through the Maha Mritunanjaya Beej mantra, the Durga Shapt Shati Paath offering gratitude to the ‘siddha gurus,’ and meditating for 20 minutes on the mantra.

Laxmi Ramanujam, Shiv Yog sadhak and president of the Sion Forum of Shiv Yog, informs that the meditative practices are not only for the farmers but for anyone wanting to raise positive vibrations. “I channel healing Shiv Yog energy for my plants at home,” says Ramanujam. Smiles another Shiv Yog sadhak, writer Suhana Bhatia, “After channelling healing Shiv Yog energy to all my plants, the best thing that has happened is the appearance of earthworms in my soil for the first time, though our balconies have always had plants.”

As you sow, so shall you reap

“Old habits die hard and it was challenging to practise organic farming initially,” says Ramchandra Balkrishna Katkar, a 72-year-old farmer in Karad district, Satara, who was habituated to conventional ways of farming since many years. So was the case with Balaso Rugge.

However, after using ‘jivamrit’—a mixture of several ingredients including cow dung along with the yog sadhana— Rugge exclaims, “The land has become stronger, subsequent expenses have reduced, and the quality of yield has improved.”

There is also a flip side to organic farming. Though Katkar encourages other farmers in the neighbouring villages to adopt this holistic approach, he doesn’t deny the threat he faced of a diminishing income after he started practising organic farming. “It is a time-consuming process which requires tremendous efforts,” says Katkar.

Adds Dr. Subhash Gill, principal scientist at Indian Institute of Wheat and Barley Research (IIWBR), Karnal, “The farmer does feel hesitation during the shift from chemical farming to organic farming. Also, recitation of mantras or meditation alone doesn’t help. The sadhana has to become a part of the farmer’s being.”

“It’s sukshma (subtle) energy,” he explains. According to him, once the farmer understands how yogic farming works, he can receive a premium price for the organic yield. BK Raju informs that during the phase of transition from chemical to organic plus yogic methods, a farmer may not observe significant yield at par with the yield of chemical farming but later, at the end of three years, he can achieve premium results.

Studies were undertaken by Dr. Gill in Gagsina village, Gharaunda tehsil, Karnal, on the insistence of Sandhu, where four plots were marked. On plot A, chemical farming was practised; plot B had organic cultivation, plot C had organic cultivation combined with yogic methods, and plot D had controlled farming methods where none of the fertilizers were used. The research and study was undertaken for a period of three years, 2011–2014, and it was concluded that the yogic farming yield was almost equal to the yield produced by chemical farming. The soil sample revealed that the organic carbon within the soil showed a remarkable increase, which was very promising.

While scores of farmers are adopting yogic farming practices, there are others like Marcelino Cardoz,73, from Ajarvaddo village in Calangute, Goa, who have never heard of it. He is very happy with the yield he receives through vermicompost farming and organic farming methods. He is quick to warn about the hazards faced by mankind by eating food grown through chemical farming methods. His farm boasts over 50 varieties of seasonal vegetables and attracts two to three visitors every day, coming for either a visit or for some organic supplies. “Walking barefoot through the fields is meditation for me,” he says, talking about the magnetic power of the earth.

Explains Bharat Mansata, environmental activist and author of The Vision of Natural Farming, “On earth, there is a constant interplay of the six paribals (key factors) of nature when they interact with sunlight, three of which are air, water, and soil. Working in tandem with these are the three orders of life: vanaspati srushti, the world of plants; jeev srushti, the realm of insects and micro-organisms; and prani srushti, the animal kingdom. These six paribals maintain a dynamic balance, harmonising nature’s grand symphony.”

He is deeply inspired by two great global beacons of natural farming, Masanobu Fukuoka and Bhaskar Hiraji Save, acclaimed as the Gandhi of natural farming, whose farms, according to Mansata, are a veritable food forest. He is a net supplier of water, energy, and fertility to the local ecosystem, instead of being a net consumer. His way of farming and teachings are rooted in a deep understanding of the symbiotic relationships in nature, and they have mentored and inspired three generations of organic farmers.

“We perform the Agnihotra mantra which blesses mother earth and our crops,” says Abhijay Save, grandson of Bhaskar Save, Umergaon taluka, Valsad district. The Save family farms are open to visitors on the weekends, and they share their knowledge through a five-day workshop on organic farming.

It’s well documented that plants grow better and are healthier when they are ‘spoken to’ or are treated with words, emotions, and energy. Yogic farming takes that knowledge a step further by influencing plants on a larger scale.

As BK Raju, vice-chairman of Agriculture and Rural Development Wing (ARDW), Brahma Kumaris, puts it: “Agriculture itself is a spiritual activity and yogic agriculture is farming with an empowered state of mind.”