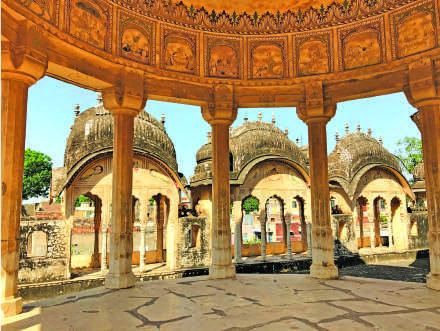 Shivi Verma finds herself enchanted by Shruti Nada Poddar’s efforts to resurrect the dying heritage of Ramgarh Shekhawati, and convert it into centre of art, healing, and culture

What do you do when you are passionate about not one but many things?

You either focus on one pursuit to the exclusion of others or end up becoming a jack of all trades but master of none. But not Shruti Nada Poddar. A healer, educationist, social worker, musician, poet, and a connoisseur of art and culture, widely known for her work on women empowerment and propagating the healing power of seed sounds, she brought all of her expertise under one roof by becoming a heritage conservationist in Ramgarh Shekhawati, a place known for its heritage havelis in Rajasthan.

The creation of Vedaaranya
When I stepped into Vedaaranya, a haveli restored and converted  by her into a boutique homestay, I was amazed to see its beauty. Every corner of it was aesthetically and painstakingly designed, in keeping with the ethos of the Rajasthani culture. The doorway had a Buddha fountain kept right in the front, lending the place tranquillity and serenity. The arches in the courtyard were painted in delicate motifs of flower-laden creepers in the hues of green, blue, red, orange, and brown, transporting one to the bygone era. Ethnic lamps and chandeliers, antique furniture comprising sofas, dewans, centre tables, settees, armchairs, and tribal art pieces and wall-hangings literally brought alive the time when royalty moved within the confines of these havelis.

My host, Shruti Nada Poddar, took me around the place, and I noticed that the haveli was a perfect combination of modern amenities and cultural beauty. The rooms were luxurious and done up in keeping with the heritage look of the homestay, but the bathrooms were  chic and modern. There is a library for the academically inclined and also a spa for those wishing to get massages and treatments.

Shruti and I sat down to high tea in her balcony which had a wall adorned with a sprawling fresco of a huge tree with birds sitting on its branches. I was mesmerised by her imaginative mind and her will to realise anything that she visualised or dreamed of.

The legacy of Ramgarh
“My ancestors come from this place; therefore, I feel a natural pull towards Ramgarh,” she said.

Speaking on what motivated her to create such a special place, she says,

“I had been doing plenty of things for art, education, music, healing, and propagation of Indic knowledge, but most of the things were happening in cities in the form of conferences, seminars, and healing sessions. I wanted my work to affect the grassroots and help humanity in a larger way. I realised I needed a region, a land in India, where transformation could take place in the whole community. I had no idea what that place would be. I started my search at the end of 2012, and I went to various places and villages of North India. In May 2013, I suddenly had this idea of visiting my ancestral town of Ramgarh Shekhawati in Rajasthan.”

She came to the place in the sweltering heat of summer when it was 50 degrees centigrade outside. She then went to her haveli and,  to her dismay, found it caked with dust and covered with cobwebs. The owners had not cared to look back after they had shifted to another region. The next day, she went about the town and was blown away by what lay before her eyes. It was a place that had stopped in time—a region full of ancient havelis adorned with breathtakingly beautiful wall paintings.

The zeitgeist of that era was captured in minute detail in the frescos on the havelis. Not only were tales from the Hindu epics depicted on the walls but also the Mughal era and the time when Britishers ruled the Indian state. Even Chinese people were depicted on the walls, signifying that trade existed between the two countries. All of India’s cultural, Vedic, and Upanishadic wisdom was artistically brought alive on the walls of temples, havelis, and chhatris (dome-shaped pavilions) constructed by the business class of the Churu district. Two hundred years ago, trade in this region had flourished and the wealthy Seths (businessmen) had invested their wealth in creating beautiful buildings, monuments, memorials, temples, and centres of learning and excellence. This place was famously known as the Doosara Kashi (the other Kashi) of India.

But, with time, they moved to more lucrative places such as Mumbai and Kolkata. The city was deserted and the ravages of time took their toll on this rare city.

The resurrection of Ramgarh
Continues Shruti, “I have travelled all over the world, but I have never seen such a spectacular place anywhere. I also felt some familiarity in the eyes of the people—almost like an inner sense. After 30 years, I decided to readopt my surname, Poddar, on that day. I cried on that day, wondering how my ancestors could allow such a heritage to go to rack and ruin. I decided to make the resurrection of this place my purpose in life. I vowed to myself that I will restore its lost glory and give all that God has given me to revive it. I started with tree planting. After that, I spoke to my uncles and managed to convince them to restore the havelis. I restored my haveli, the fort, and the Vedaaranya Haveli, that I purchased from its owners. I decided to resurrect this place as a heritage place, dedicated to healing, art, craft, and learning.”

To save the place from destruction and attract funding for its restoration, as well as celebrate the culture of Rajasthan and the priceless heritage of India, Shruti started the Vedaaranya Healing and Heritage festival in December 2016 in Ramgarh Shekhawati.

“We had six Padma awardees including Sonal Mansingh, Shovana Narayan, Geeta Chandran, and the Manganiyars (the folk musicians of Rajasthan) grace the event. Plus, we also had experts in yoga, ayurveda, and all kinds of healing modalities. The idea was to draw the attention of people to this forgotten land that used to be the world capital of frescos and wall paintings, and an epicentre of knowledge, culture, and beauty. Another aim was resurrecting the local community by helping them realise this region’s worth. Most people had forgotten about the value of this place.”

Shruti recently completed the third Vedaaranya Heritage and Healing festival, which is also called the VHAH festival, from 10–13 January 2019. There was a Sufi performance by Parvathy Baul who sings, dances, and plays instruments, all at once. The Kaalbeliya and Manganiyaar dancers enthralled the spectators on the second day, and the third day comprised a heritage walk, where people walked around the town, enjoying the beauty and learning about the history, culture, and art of Ramgarh. Also, a group from Jaipur did Kathak on Sufi music. On the last day, there was a performance by Taufiq Qureshi, who is called a game changer because he plays Indian classical beats of the tabla on African drums.

Healing in the Haveli
Shruti, who is also a healer, believes that healing is about the opening up of all your senses, where your body and mind get taken to a different level. The festival had healing sessions too, where ayurveda experts taught people how to make creams using natural ingredients. There was also a session on Nad yoga, which is healing based on vibrations, and a session on nutrition with Vidhi Berry.

Says Shruti, “The purpose of making this homestay is to provide accommodation so that people can come here and live in the Vedaaranya Haveli, with the best of food, hospitality, rooms, beds, and toilets that you don’t get in this region. A visitor gets an opportunity to stay and enjoy our week-long healing packages.”

The healing packages consist of ayurvedic treatments and healing with mantras (chants), sound, and mudras (hand gestures). People are taught how to make their own herbal recipes for their skin and stomach. Special consultancies are also provided by ayurvedacharyas (ayurveda experts) who give special remedies not found anywhere else in India because that knowledge has been lost. Vedaaranya also provides residencies to writers and artists. People stay in Vedaaranya over a month, just so they could write in solitude or learn how to make lac ornaments, bandhani (a textile art) dye, or weaving on the loom from the locals. “For those suffering from psychological blockages, getting involved in some form of creative activity is the best way to heal,” says Shruti.

An ancient Vedic centre
Reminiscing about the rich heritage of Ramgarh, Shruti emphasises that Ramgarh was a Vedic place. “It had eight centres of Sanskrit learning. Close by is a forest with the highest population of Chinkara deer. The place also boasts of a rasayanshala (chemical lab) where they made shankh ke bhasma and moti ke bhasma (ayurvedic preparations made from seashells and pearls). The only Vedic temple of India where there are no idols, exists over here. Only the four Vedas are kept,” she says with confidence.

The next day, when I went sightseeing, I was truly awestruck to see the profusion of wall paintings on each and every haveli of the place. All of Ramayana, Mahabharata, local folklore, and even long-forgotten ragas and raginis (melodic scales) too had been given a form and painted on the ceilings and walls of the monuments.

There were dharamshalas (rest houses), temples, bawdis (stepwells), and gaushalas (shelter for cows) too, constructed by the wealthy Seths 200 years ago. The deer roamed in the jungle so freely that you could see them with your naked eye and almost touch them through the window of your car.

I was particularly taken in by the Shani temple, which shone like a jewel because of the Belgian glass that had been used to decorate it with, by the Seths of yore.

Every haveli had its own story and it would take a lifetime to uncover each of them. A wealth lies untapped in Ramgarh, and Shruti has kicked open the locked doors of a treasure trove that she wants to share with the whole world. Just google it and go.

How to go:
From Delhi to Churu by train—5 hours

From Churu to Ramgarh by bus or taxi:
30 mins.