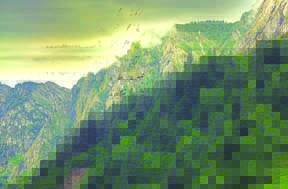 IN HIGHER REALMS WITH BABAJI

K Geethanjali, a follower of Mahavatar Babaji, fulfils her lifelong wish of visiting the Master’s cave, only to find herself being drawn to the silence within her inner cave

Any Kriyaban (Kriya Yogi) will aspire to accomplish one great pilgrimage in their lifetime: a pilgrimage to the cave of Mahavatar Babaji. I was no exception. Ever since I became his devotee, I too had this strong desire in my mind to visit the guha (cave) of the great Siddha, Mahavatar Babaji, of whom Paramahansa Yogananda speaks about in his book,  Autobiography
of a Yogi.

Thirty years had to elapse before I was ready to make the Himalayan trip to the Kumaon hills—the time needed for me to be ready to absorb the energies there and get the most out of it.

Dev Bhoomi darshan
And so the blessed day of May 3, 2019 dawned bright and clear. The previous day, my husband and I had reached Delhi from Chennai. There we met my sister and her husband, both Kriyabans from Yogoda Satsanga Society (YSS), and so it was decided that the pilgrimage should commence with a visit to the YSS ashram at Dwarahat, a small town in Almora district in the Kumaon region of Uttarakhand. This Himalayan region, also called Dev Bhoomi, is hallowed by the presence of Mahavatar Babaji, who initiated Lahiri Mahasaya into the ancient technique of Kriya Yoga in 1861 in the Dunagiri mountain, thus making it available to the world.

The YSS ashram, which is 1.5 km from Dwarahat, took my breath away with its sylvan surroundings. At Kathgodam, which is the gateway to the Kumaon region and where the railway ends, one has to take a cab or a bus to the hills. We took a cab and once we crossed Bhimtal and Bhowali on our way to Ranikhet, the hair-pin bends sharpened and towering pine trees began to make their appearance. We haulted frequently on the way, admiring the picterisque beauty of the route. The signboard ‘Ranikhet’ revved up our excitement again as it meant we were just 38 km away from our destination and also because it evoked memories of reading about Lahiri Mahasaya’s transfer to Ranikhet in chapter 34 of Autobiography of a Yogi. The story goes that Lahiri Mahasaya was working in Danapur when a telegram came from the main office. He was transferred to Ranikhet, where an army post was being established.

This excitement saw us through the remaining journey. When we reached the YSS ashram, we devoured the tasty lunch of rice, dal, salads and sprouts spread out for us. Just as we were washing our plates, rain burst forth with hailstones too, a true blessing for anyone who had just come from the scorching plains of Chennai. It being a Thursday, we went to the Dhyan Mandir to take part in a long, three-hour chanting and meditation session but not before exploring the beautiful gardens and halls in the ashram.

The day arrives
The next morning was the D-Day. It started out with a long walk in the pine-filled roads outside the ashram. Emboldened by the sight of school children moving fearlessly about, we embarked on a long walk which not only brought to our sight rare birds and peaceful terrains but also brought us face to face with the famous Himalayan hospitality of the village folk with their washed faces and red tikkas. Everyone we met, from school children to labourers going to work, would shout out a,
“How are you doing?” or a demure ‘namaste’ as they passed by.

As we watched a sure-footed old lady take a track down the mountain to fill some water from a catchment, she suddenly looked up to see four heads following her route. Unlike most city folks who would have got angry on such a thing about getting their privacy invaded, the old lady was only amused and asked us jocularly if we wanted to follow her to collect water.

YSS leads the way
After these heart-warming encounters and fortifying ourselves with a heavy breakfast, we set out at 9 o’clock. The ashram had provided us with not only a jeep but also a young guide who carried our lunch and umbrellas. As the jeep trundled down narrow tracks, we were told by our guide that we were on the Pandukholi route (where the Pandavas stayed during their exile). He also pointed out the Dunagiri temple en route. Kukuchina is the last village there, and then the jeep had to manoeuvre narrow trails for about 2 km until it came to a halt. The rest of the journey had to be made on foot. YSS had also put up boards not only at the beginning of the trekking point but all along the path, guiding devotees to their destination.

The paths were strewn with dry leaves and we took breaks once in a while, not only to catch our breath but also to stare at and admire the beauty of rhododendrons that carpeted the paths. It was so overwhelming that it just wiped away the fear of navigating the narrow trails.

I am asthmatic and had fortified myself with my inhaler and though I did gasp and breathe heavily, it was funny that I didn’t wheeze or feel the air being squeezed out of my lungs like I usually do while climbing up. Surely Babaji was carrying me through it all.

We spent a few minutes at Mahavatar Babaji Smriti Bhawan, a meditation hall built by YSS, before we began climbing higher to the actual cave.

At last!
The moment of seeing the cave was a surreal experience. I felt as though I was a dream character walking into a dream frame I had manifested, albeit slowly. I was in the middle of nowhere! I had finally made it!

I walked into the cave and saw that a group of people I had seen and heard walking the trail ahead of us had already entered within. They were making a lot of noise and were chanting loudly which irritated me. “The cave is for meditating in silence,” I thought, feeling disturbed. We waited as they lit a lamp and burnt incense.

My sister had picked up a rhododendron to offer to Babaji while I hadn’t been so insightful. My husband and I went outside searching for any flower we could lay our hands on to offer to the Master but to our disappointment, there was none to be found. We had no idea that there would be a picture of Babaji inside the cave but there it was in the corner - A picture of the Kriya Master.

Babaji communicates
As I sat down to meditate, reconciling myself to the fact that I had no flowers to offer, my irritation grew. The group outside was arguing on who should lead the chant. One of the ladies disengaged herself from the group and came in again with her little daughter. She had a plastic bag whose rustle did nothing to lessen my irritation. I opened my eyes to give them a quelling look. As I looked at them, I saw the little girl holding out something from the bag. It was a bunch of rose petals. This was an indication that the Master himself had fulfilled my wish to offer him flowers through her. As I thanked her whole-heartedly, I felt ashamed of my judgment about the group. It was as if I was the one being shown that it was the small ‘little me’ who has pre-conceived formats of how things ‘should be.’ Great Beings accept unconditionally.

The group of devotees left but only after supplying us with a prasad of chikkis (food offering) which helped us stave off our hunger pangs.

I got all the peace I required after that. As my husband and brother-in-law finished their meditation and sat outside communing with nature, my sister and I meditated.

We took pictures, meditated to our heart’s content, and then sat looking at the magnificence of the nature outside.

Sitting there in his cave, staring out at the world, I realised that my guru had called me to his guha to give me a profound gift. If my earlier visit to Rishikesh with its flowing Ganges had put the flow back into my life, my visit to the Kumaon hills and Babaji’s cave had led me to a deeper place of stillness within myself. Babaji was leading me from the external cave to the stillness of my own heart cave. And the only ripple that appeared in this silence was a deep desire to meet the immortal Master who is known to have appeared to his devotees.

As my sister and I left the cave, funnily, we both had the same thought, and we both spoke our thoughts aloud in a jinx: “You have brought us this far Babaji. We have come all the way from one corner of India to the other to see you. Now it’s your turn. You must come and reveal yourself to us.”

It may take years or lifetimes of purification before we are evolved and eligible enough to see the living Master, but then, how does it matter when we are ready to wait and do the work it entails?

Continuing the inward journey
As I left the cave, strangely, I did not feel a pang. I knew it was very unlikely that I would ever make such an arduous journey again. Even the desire to make a pilgrimage to the Garhwal region of Uttarakhand where the famous shrines of Badrinath and Kedarnath lie, fell away from me. All desire for external pilgrimages had reached their closure with this trip to my guru’s cave. Does this mean that I won’t go on pilgrimages any more? No. If Life needs me to go to some holy place to clear my vibrations, I will follow the call, but a certain flexibility had set in and the compulsive desire to go to places outside shrugged off from me the minute I left the cave. Pilgrimages hereafter, would be to the source within me, where I could meet Babaji as my Self!

And so the journey would continue. A different type of journey—into an inner terrain.