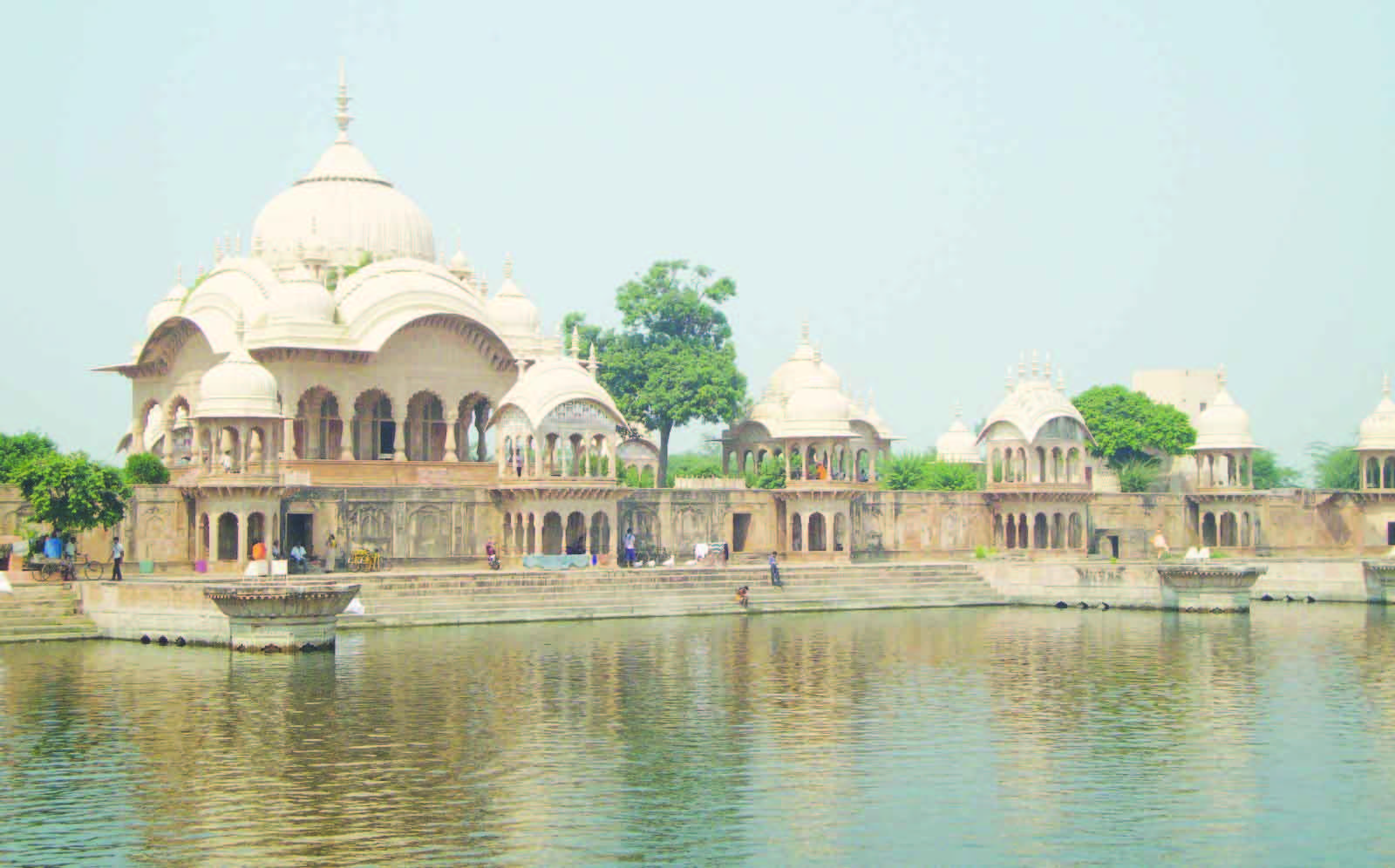 Nandini Hoon visits Mathura and Vrindavan, the place of Sri Krishna’s birth and childhood pastimes, and is mentally transported to the era when the Lord himself walked this earth

As a child I grew up celebrating Janamashtami—the appearance of Lord Krishna on earth—and listening to his stories and pastimes. We visited temples like the Birla Mandir in New Delhi, which depict the birth of lord Krishna in the form of tableaus. Inspired by the fascinating tableaus, I decided to visit Mathura—the birthplace of Lord Krishna.  An ancient city, whose history can be traced back to the time when Maharaja Agarsen(the father of king Kansa), ruled in Dwaparyuga, much before Christ was born. I packed my things along with a diary and pen, and took the bus to Mathura and Vrindavan from Delhi.

The bus took an old route even though there is a faster expressway, and we reached Mathura in about three and half hours. As we approached Mathura, I saw smoke and flames coming out from a huge structure. I was a bit taken aback, but as we came closer, I discovered that it was the Mathura refinery—the biggest refinery. As we moved ahead, on my left I saw the Aurangzeb Masjid tomb, which is believed to be adjacent to the Janam Sthan (the birthplace of Sri Krishna) towards which I was heading. That exhilarated me, and I was very excited to enter the Lord’s abode.

As we crossed it, we came across the Laxmi Narayan temple, also called the Birla Mandir, which is on the outskirts of Mathura. I wanted to step down and pay my reverence, but to my dismay, the bus did not stop there. After 15 minutes, we entered the old heritage town (as certified by the ASI) of Mathura.  I referred to the list of places on my agenda and took the first available rickshaw to Janam Sthan. After about 15 to 20 minutes, he halted at the designated place, which was a big quadrangle thronged by people.

I had always thought that Janam Sthan would leave me awestruck, but this place had its own unique character.I purchased the ticket from the ticket counter and was led up a flight of steps. I climbed the steps and upon reaching the top, I saw two walls which were joined together. These two walls were of the Aurangzeb Masjid and the prison where Devaki and Vasudev (the parents of Lord Krishna), were kept by King Kansa.

The guide told me that the prison with iron bars was in the basement. I went down to see the birthplace of the Lord. I was fascinating by the place and for a second, was transported to the time when Devaki and Vasudev lived here. I paid my reverence, asked God to bless me, and moved on to the adjoining temple. My next stop was the temple of Dwarkadheesh. According to folklore, it was constructed when Sri Krishna became the king. By this time, my stomach had started sending me signals that it was hungry, and I decided to visit the famous sweet shop of Mathura. I headed towards the sweet shop perched on a stand, whose owner was busy beating the flavoured curd. I bought a plate of hot pooris and aloo ki sabzi and topped it up with mouth- watering roasted condensed milk. I washed these delicacies down with delicious faluda kulfi and satiated my appetite. Adjacent to the kiosk were some shops selling incense sticks and scarfs with Hare Rama, Hare Krishna printed on them. I bought two of them.

The ghats of Mathura

The locals told me that there are 25 ghats in Mathura since it is situated on the banks of the Yamuna. Out of these, a few are very sacred, where people take holy dips. I visited one such ghat where people feed tortoises to get rid of their sins. To my bad luck I didn’t see any tortoises that day. There is so much more to explore in the holy city of Mathura. It also has a museum which is one of the rarest museums, showcasing ancient scriptures and the original headless body of Kanishka. Mathura also boasts of a beautiful old colonial cantonment area that still has British barracks, garrisons and old bungalows. This old, ancient, heritage town is a true blend of Hindu mythology and British Raj.

From here my destination was Vrindavan, an adjacent holy town, full of temples. Its name is a combination of two words; Vrinda, which means holy basil and Van, which means a forest. Apparently, this place was a forest of holy basil trees, where Sri Krishna performed the raasa dance with the gopis and also subdued the venomous snake god Kaliya.

Vrindavan is strewn with temples. I decided to visit the ISKCON temple and the Banke Bihari temple which is one of the oldest and most revered temples in Vrindavan. People visit them to thank God and fulfil their wishes.

The Banke Bihari temple has a very interesting structure, and the pandits over here perform rituals and pujas according to your wishes. The ISKCON temple, which is made of white marble, is one of the prettiest temples in Vrindavan. Housing the idol of Sri Krishna and Srimati Radha, this temple serves langar in the form of prasadam. Therefore, if one is hungry, one should go to the ISKCON temple.

Inside the temple the sound of chanting and bhajans in praise of Lord Krishna is very soothing to the ears. One can just sit and feel the presence of Divinity in the air. There are shops which sell beautiful paintings of Lord Krishna and books like the Gita,which one can buy and take home as a memento.

Though there are many interesting temples in Vrindavan such as the Tulsi Van, Prem Mandir, Kaliyanang Mandir, on the banks of the Yamuna, due to constraint of time, I visited only three and headed back to Mathura, from where I took a bus, back to Delhi. All the childhood folktales, stories and songs I had heard and sang about the Lord, had come alive when I visited these places. I virtually felt that it was truly the Lord’s own abode and Sri Krishna is truly the essence of humanity.

Places to visit: Mathura and Vrindavan

Best months to visit: All through the year