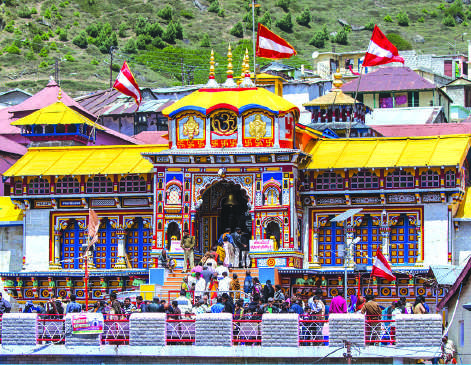 In the abode of Lord Vishnu

In the abode of Lord Vishnu
Rejuvenated with a sense of veneration for Lord Vishnu, Nandini Hoon reports on her return from Badrinath, a holy land steeped in religious history

The story of Badrinath, a power spot in India is most fascinating. Badrinath is the place where the preserver of the cosmos welcomes his devotees with open arms. Badrinath is known to be the foremost Dham, which was established by Adi Shankaracharya in the sixth century. There is an image of Lord Badrinarayan, made of stone that was discovered by Shankaracharya in the Alaknanda river. He originally enshrined it in a cave near the Tapt Kund hot springs. In the sixteenth century, the King of Garhwal moved the murti (idol) to the present temple. The temple is approximately 50 ft (15 m) tall with a small cupola on top, covered with a gilt roof. The facade is built of stone with arched windows. A broad stairway leads up to a tall arched gateway which is the main entrance. The architecture resembles a Buddhist vihara (temple), with the brightly painted facade also more typical of Buddhist temples. Just inside, is the mandapa, a large pillared hall, which leads to the garbhagriha or main shrine area. The walls and pillars of the mandapa are covered with intricate carvings, where, it is said, the purest forms of energies are preserved till date.

To reach this pious spot, one has to go through the jungles of Uttarakhand, which start from the land of Rishikesh, via the scenic spots of Rudraprayag, Auli, and Joshimath which have dense rhododendron forest cover and, finally, Badrinath, which is decked up in snow throughout the year. The village Mana is next to it and is a way to Tibet. It is said to be the abode of the famous Ganesh Cave where Lord Ganesha narrated the Mahabharat and Rishi Ved Vyas penned it.

Badrinath is also close to the spot from where it is said that the Pandavas ascended to heaven. Also nearby are Hemkund Sahib and the Valley of Flowers which has a unique fragrance of the yellow flowers known as the common dandelion. It is said to be highly beneficial to visit these sites for seeking blessings and moving towards spiritual consciousness. Being a hill girl, I  decided to fulfil my dream of visiting Badrinath. I packed my bags during the months of March-April when the weather is said to be pleasant and tranquil.

With zest in my heart, I reached my first spot, Rishikesh which is the pious space of ethereal meditations and the holy Ganges.

The magical journey
With my salutations to the blessed spot of Rishikesh, I took my journey to Badrinath through the winding roads and scenic terrains of Uttarakhand. I enjoyed the scent of the forests and the hills which were gigantic in size. Some soothing music on my audio player made my 14 hours magical, with routes traversing Rudraprayag, where the rivers of Mandakini, Bhagirathi, and Alkananda meet, forming the mighty Ganga. Here, I stopped for my first break, to feast on a wholesome,  delicious meal of aloo ka parathas made with chillies, onions, and bittersweet tomato chutney. Soon after, while going through Joshimath and Auli, which are so scenic and tranquil, I fell in love with their spectacular beauty.

Snow-capped mountains, gushing waters, and villagers with their tender smiles filled up my journey to Badrinath, the abode of Lord Vishnu. On reaching Badrinath, I saw the beautiful peaks of Neelkanth, which was shaped in the form of Lord Shiva`s neck, which is true blue in colour and taking in all the evil of the world.

I felt myself enter a space of complete quiet. All the city hustle and bustle just seem to  dissipate away into the pure air of Badrinath. The temple has been made in the Kumaoni structure, a Buddhist style, with the old idols of Lord Badri. Abhishek to salute the Lord was performed there with the aartis of silver and gold thalis.

After checking into the hotel and resting for a while, I enjoyed my locally prepared plate of French fries and a cold coffee, post which I gorged on a bowl of sumptuously prepared tomato soup, which really helped to bear the chilly winter. With a raincoat and an umbrella protecting me, I proceeded towards the shrine of Badrinath, a kilometre walk away from my hotel. As I started my walk towards the shrine, the chanting of ‘Om Laxmi Namo Narayan’ started in my head automatically. With the ongoing chanting and zest to meet the preserver of the world, I finally entered the shrine of Badrinath, which was bustling with people from all walks of life, seeking the blessings of the Lord, and getting their abhisheks done. Their aartis preformed with the fragrance of purified camphor healed us wholly, and the power of the Lord and the goddess took away our pain and negativity.

I had tears rolling down my eyes, a smile of gratitude, and a deep, silent contentment within. The priests gathered, were putting tilak on the devotees and blessing them with the sawai prasad which is specially prepared as a form of blessing to the visitors. With the local batashas and ladoos being handed out, the atmosphere was filled with gaiety and gratitude. The bells of the shrine, which are there since the time of the Shankaracharyaji, were  ringing  constantly and the silver doorways welcomed everyone. The atmosphere of the illumination of Narayan`s splendour enriched me, and I left the abode full of mystical energy.

The exotic bazaar
After my darshan, I explored the bazaar of Badrinath which sold idols of Lord Vishnu, with stories from the Puranas, highlighting  Narayan in all his forms. The messages inscribed within explained every avatar the preserver had ever taken to preserve the world after mass calamities struck it.

Sadhus, hermits, and mystics to business tycoons, film directors, doctors, engineers, and adventure lovers, all thronged this pious land in order to purify their karmas.

Having completed my round of the area, I went back to the hotel to rest. I sang the song ‘I am alive’ by Celine Dion to express my joy at the kindness of the people there and the power of divinity.

The next morning, with the sun shining brightly over Neel Kanth, I felt one with nature in all its aspects. Then, post my morning gaze at the mountains, I sat down for a kingly breakfast of breads, hot buns with butter, honey, milk, gobi ka parathas, and some rich curd.

Mana village
The next visit on my trip was the famous Mana village, which was on the edge of Badrinath and near the Tibet border. It was the old route from which travellers entered China. The Mana village is known to be the last village on the Indian border, which has a tea stall that serves Maggi and tea with pakoras. It also serves rajma chawal and kadai chawal with some kadak elaichi chai, all of which were really inviting  me as I am a foodie who loves to try the locally  cooked cuisine throughout my travels. I also wanted to see the Ganesha Cave. So, I finally left to view these two majestic sites. The terrain was undulating, with really chilly winds blowing and an increase in snowfall.

Clothed in my woollies, I trekked up to Mana village, from where the view of the valley was spectacular and it really mesmerised me to see that the Lord had chosen this place to reside. The village is populated by the Indo-Tibetan people and has a tea shop, which is the highlight of this little village. Before leaving the area, I had my signature, delicious ‘mountain Maggi,’ made up of onions, tomatoes, and various hill spices. My taste buds felt heavenly,  and I was thrilled to witness the joy of divinity at Mana village, which had the most elegant bed of lilies growing. It was a paradise which I witnessed, and I paid my gratitude to the Lord, with the holy Ganesha Cave close by. On this note, my lovely sojourn came to an end, and I returned home filled with a sense of veneration for the Lord within myself.

By road: 500 km from Delhi via Rishikesh.

By train: A five-hour journey from Delhi to Rishikesh and then onwards by car to Badrinath.

By flight: From Delhi to Dehradun and from there by car to Badrinath.

Time to visit: Between April to September.