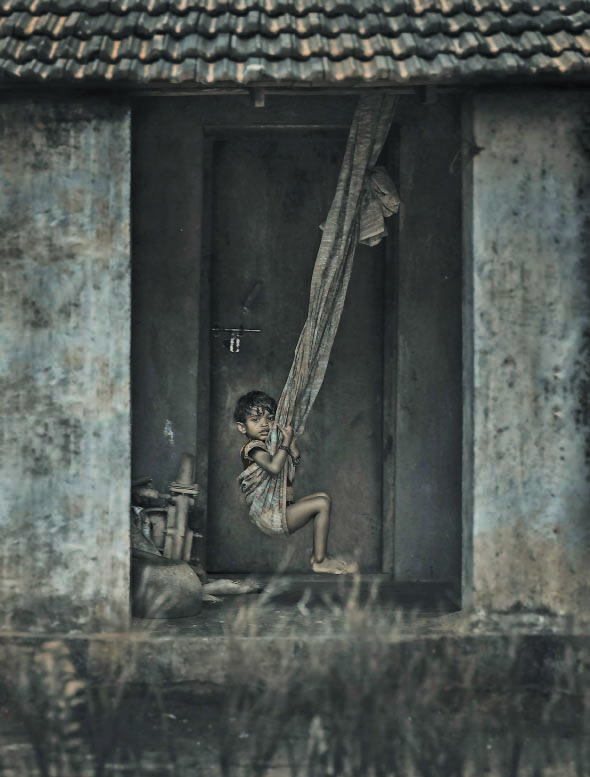 Dauntless Durga
Aparna Dedhia narrates a heart-warming story of a little girl who, with her unshakeable courage and large-heartedness, had a healing effect on her and her friends

We were strolling along the bank of the river Ganges, under the celestial sky, mesmerised by the floating diyas—little lamps let loose in the Ganges by devotees— meandering the course of the river. As we neared the Sai Mandir, at Triveni Ghat, we met this little chit of a girl, selling little dough balls to feed the fish, who taught us a few of life’s priceless lessons.

All of us bought some dough balls to feed the fish. One of us went an extra mile and bought all her stock. A big smile lit up her lovely face, and she exclaimed, “Tonight I am going to cook up a feast for me and my siblings with all this extra money!”

Our curiosity got the better of us, and we started bombarding her with a multitude of questions like “What was she doing so late in the evening sitting in the dark near the Sai Mandir, near Triveni Ghat ?”; “Didn’t she go to school?”; “Why was she going to cook, wasn’t she too young to cook ?”; and “Where was her mother?”

She opened up slowly and told us that her family hailed from a small village near Varanasi. Her name was Durga and she was one of the younger siblings; they were a brood of four sisters and two brothers. Durga and her family, survived on the meagre earnings of their mother, Shalini Devi, who did menial jobs, to sustain the family of seven.

She had lost her father, a daily wage labourer, who was a habitual drinker prone to abuse. In India, there are several families where men have taken to abusing alcohol. The women work very hard to earn wages and run the household but their limited incomes are often squandered away by their husbands, on alcohol. They also single-handedly have to shield themselves and their children from the spouse’s violent behaviour.

Freedom from torture
One day, after a bout of heavy drinking, Durga’s bapu (father) burst a gas cylinder while lighting a beedi (an Indian cigarette). In no time, their entire hut was in flames. They lost him in the accident. Luckily, they were at the village for the summer holidays and hence survived that fateful day.

Was it a blessing in disguise? His death gave the family respite as he used to blow up all the money he and his wife earned on alcohol, leaving the children to survive on scraps, thus putting an end to years of physical abuse and domestic squabbles. The family struggled to make ends meet but managed to survive with Durga supplementing the income by selling dough balls after school hours, sometimes accompanied by a friend.

Today, her mother, Shalini Devi, had gone to their village. She and her elder sister, who was all of 16 years, were looking after their family of six siblings. Tonight, with all the extra money she got, she was going to treat all of them to an extra serving of vegetables and hot rotis, and top it off with dahi (yogurt) sweetened with sugar.

Big dreams
“I aspire to be the next Mary Kom,” she announced and went on to tell us how she and a friend of hers practice daily, using plastic jholas as makeshift gloves, and a punching bag devised by them, to practice boxing.

She told us that people around her bless her when she touch their feet, with benedictions like “May you beget the best husband” and “May you have a long and happy married life.” Her regret was that no one ever asked her what her aspirations were or what career she would like to choose. No one ever showered her with blessings for a long and fulfilling career. Isn’t it a paradox that in a country where women are worshipped in the form of Kali, women are still expected to be mere homemakers, their career aspirations taking a backseat?

If not Mary Kom, she would definitely like to join the Indian police and become a lady police inspector. She desired to protect the women of her kith and kin from the atrocities inflicted upon them at home and at work. She wanted to make money, so she would be able to give her siblings the chance of a better life and be a guardian angel to the womenfolk of her country.

An inspiration for all
Her answers, which gave an insight into her indomitable spirit and zest for life in spite of the hardships she faced, had all of us looking inwards with gratitude and counting our blessings. Her awareness of her troubled past and a difficult present did not diminish her hopes for a dazzling future. Her sagacity was beyond her years and had us bowled over.

No encounter with any saint in Rishikesh could help us replenish ourselves and nothing would equal our lesson from this evolved soul. With her dreams of a better life, not only for herself but her siblings too, and with her desire to serve the women of her country, little Durga enlightened us, healing our hearts on that dark wintery night in Rishikesh.

God can help us write our own stories, help us forget our darkest moments, and show us the light at the end of the tunnel. We can be the author of our own story, write every chapter with conviction, and mould our future.