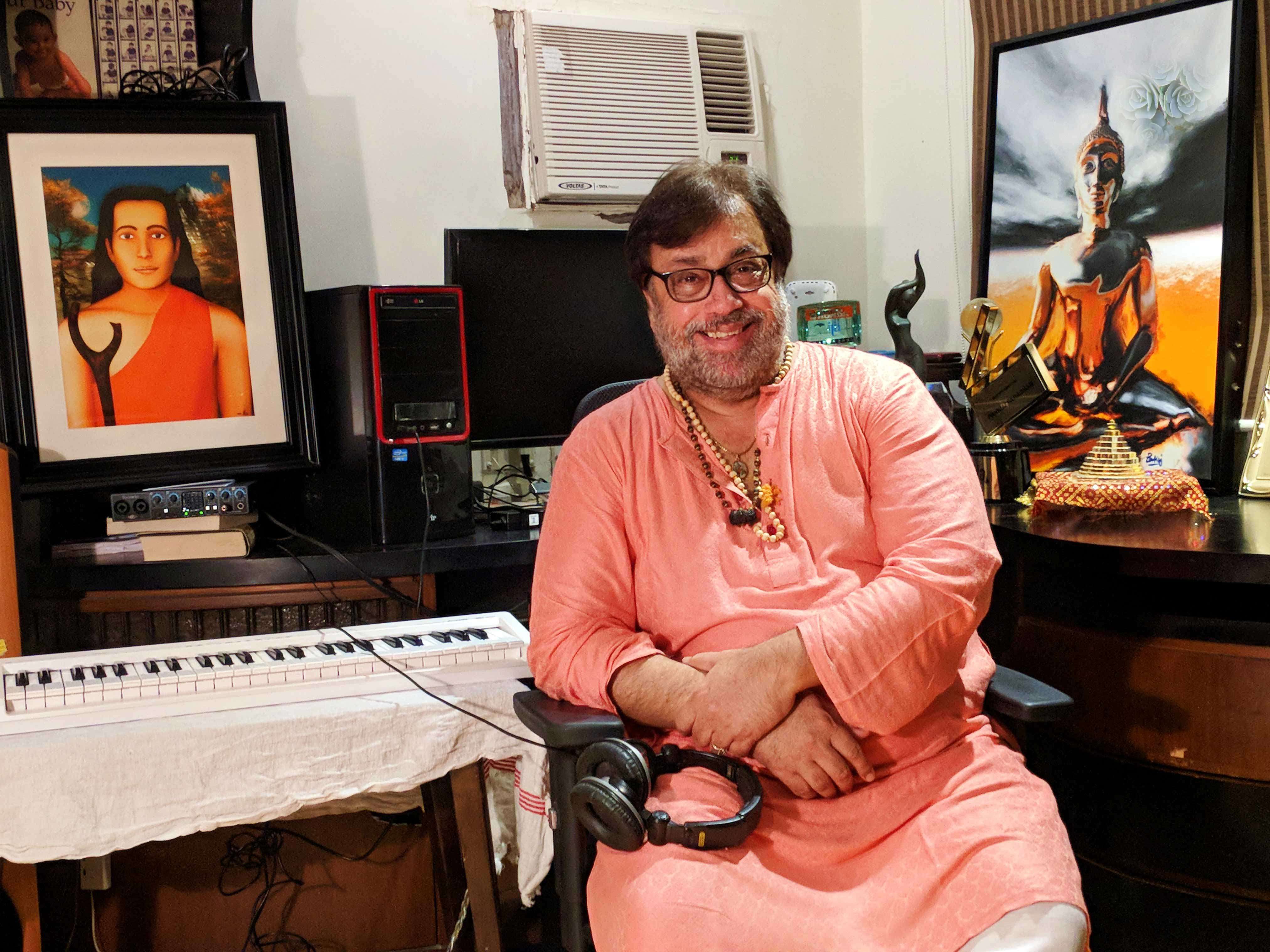 Noted filmmaker Pankuj Parashar talks to Satish Purohit about how his spiritual journey continues to shape his outlook, life, and work

For those of us who came of age in the late 80s, Pankuj Parashar, a graduate of Film and Television Institute of India (FTII), painter, graphic artist, composer, and filmmaker, remains an important shaper of our imaginations. Karamchand, the hugely popular television detective series directed by Parashar that made Pankaj Kapur a household name, was running on Doordarshan. I remember Sachin Chawla, a classmate, telling me that he had walked up to Pankaj Kapur, who lived somewhere in New Quarters, a sprawl of single-storey flats painted in the pale yellow of all government buildings across India, to ask him, “who is the murderer?”

Kapur, I remember Sachin telling me, had smiled and asked Sachin to watch the next episode. Detective Karamchand, who loves carrots, maybe for the beta carotene, also had a vacuous secretary, named Kitty, who would constantly be corrected with the line “Shut up, Kitty!” Parashar went on to make commercially successful films like the cop-thriller, Jalwa (1987), starring Naseeruddin Shah, and the Sridevi hit, Chaal Baaz (1989), which got the actress the Filmfare Best Actress Award. His film, Banaras—A Mystic Love Story (2006), was named after the city, which formed the backdrop of the film’s story. Starring Urmila Matondkar and Naseeruddin Shah as leads, the film was rich in references to the Buddha, Kabir, Tulsidas and Mahavatar Babaji. Parashar has shot another film in Banaras recently, for Children’s Film Society India called Banarasi Jasoos, which has little detectives solving the case of Tulsidas’s missing footwear!

Life Positive paid a visit to Parashar’s cosy little office/studio in suburban Mumbai. The leafy lane in upscale Khar, leading to the quiet house which spilled over with musical instruments, books, trophies (including a Filmfare Award for the documentary, Malfunction, in 1980), and a big-screen desktop connected with a musical keyboard, set the tone for the conversation that followed.

Tell us something about the creative and spiritual influences in your formative years.

I was creative as a child, like most children. I was finger painting at the age of five and tried my hand at composing music. When there was a newspaper strike, I ‘hand printed’ my own newspaper that included my cartoons and sold them in the neighbourhood at the age of 10.

Anand-Milind, successful film directors, and sons of the celebrated music director Chitragupta, were my neighbours. Their house was stocked with all kinds of musical instruments imaginable. My father bought me a sitar when I was 13. I was enrolled in a sitar class and made to practice raag Yaman Kalyan for one full year.

I had a grand aunt who was widowed early; she lived in Haridwar. We would often visit her during my school holidays. She freely shared with me stories from the Ramayana, Mahabharata, and Yog Vashishta.

It was from her that I learned that I have descended from the Parashar gotra (the blood line or disciplic line descended from the seer Parashar). She told me that I had the seeds of greatness in me, but I had to work hard to nurture them or my lifetime would be wasted. She quoted the Buddha and said that to be born as a human with self-awareness was a great honour and that I should be thankful to the universe for that.

I have always been fortunate in one respect. I attract many spiritual people in my life. I get to meet a lot of elevated seekers, avatars, gurus, and spiritual souls. Considering the sound moorings I had in our spiritual tradition, life was meant to unfold the way it has, I guess.

When I turned 10, I used to badger sadhus in Haridwar with questions like, “Why visit the temple? Why worship idols?” So, I was always a seeker. This side of my personality stayed alive till I entered adulthood.

So, how did the spiritual and creative sides of your personality influence your craft as a filmmaker and storyteller?

Apart from doing the usual Bollywood commercial films (with stars like Akshay Kumar, Salman Khan, Anil Kapoor, Sri Devi, and Madhuri Dixit) I also shot a series of esoteric spiritual documentaries, which opened up new worlds for me.

I read that by the age of 40, our brain cells reach their storage limit.  However, one can increase one’s creativity by tapping into the Akashic records, the storehouse of all knowledge and records of what is, what was, and what will be, regardless of one’s age. So, in a way, one remains forever young in the head and the heart and can, if one so wishes, actually be more creative than he or she has ever been.

Tulsidas wrote the Ramayana at age 65. Whether Hanuman recited it to him or he dipped into the Akashic records is worth considering.

I was fortunate enough to hold the original handwritten Ramcharitmanas of Tulsidas in my hands in Tulsi Kutir, Banaras, during the shooting of my movie Banaras—A Mystic Love Story. It is sad that most people do not know that it exists.

My life, which includes my creative pursuits as a filmmaker, has been scripted in many ways by spiritual forces. I understood this when I had the opportunity of receiving wisdom from Sri Amma Bhagwan of the Oneness University. Actually, my association with Sri Amma Bhagwan in 2002 (Amma and Kalki Bhagwan of Oneness University) opened up a world of spiritual possibilities for me as an individual and also as a creative person.

How did Sri Amma Bhagwan enter your life?

In 2002, when Sri Amma Bhagwan or Kalki (for those who do not know Sri Amma-Bhagwan are a wife-husband pair) were only known to a minuscule but close-knit circle of devotees, I received a call from their ashram. I was doing mainstream commercial filmmaking back then and had little to do with any spiritual guru or organisation. They wanted me to visit the ashram. They described the place as a verdant forest surrounded by sylvan hills and a clear water stream where little fish nibbled away at the dead skin of one’s feet. I agreed to pay them a visit because in my mind it appeared to be a good place for an extended picnic.

I was received by the closest devotees called dasas at the ashram. Bhagwan was supposed to visit us from Chennai shortly. We made good of the time by playing cricket, talking, and generally having a good time. Food came from a village nearby as the facilities at the ashram were rudimentary back then. When Bhagwan arrived, we spoke for three hours and I sensed that I was standing at a door. If I pushed, a whole world of possibilities awaited me on the other side. He told me that I would be making a spiritual feature film a few years later. I laughed it off saying I would never do an experimental film. Four years later I shot Banaras—A Mystic Love Story! It was eventually screened at the ashram.

What changed for you after that call from Kalki Bhagwan’s devotees?

The conviction that the spiritual world has a lot to offer us grew on me. Bhagwan spoke with great certainty in those three hours. He assured me that a big temple would come up at this very spot where devotees in thousands would arrive and get transformed completely. His manner was that of calm knowing.

At that time, in that remote patch of land, there were no signs of the teeming metropolis that he expected to manifest. Every word he spoke to me on that day has come true. Later, I was told by one of his close devotees that I was to shoot a havan that was being planned. I told him that I had no plans of shooting non-commercial films. However, I finally relented and decided to shoot a film for the Oneness University. It was, of course, a professional arrangement. I returned a few months later after I was told that Bhagwan was now giving initiations. A dasa would come over to my room at six in the morning and pour ‘cosmic energy’ into my crown chakra. Without touching me! For the first six days, nothing happened. Then something opened up within. It was a profoundly transformative experience.

I could watch thoughts flitting through my mind with stunning clarity. I sensed the breathing of plants and saw a horse grazing at some distance. I could suddenly feel what the animal was feeling. The animal did not experience itself at all and was engrossed in the act of eating grass. The ecstasy the horse was feeling was unbelievable. It was a supremely blissful experience. We clutter our heads with so many thoughts on the surface, and in the subconscious, we miss the bliss of just being. The problem is that our ‘self’ is a wall and will not let this happen. Unless there is outside grace, or we get lucky like Krishnamurthy or Sadhguru Jaggi Vasudev.

I went through sadhanas that purified the self at very deep levels and as I progressed, I felt extremely light. It was as if a great weight had lifted off me.

In the night, as I lay on the terrace, I felt the whole universe in me. My guide or dasa too felt this and we both just laughed endlessly, a causeless joy.

I went on to shoot a documentary that captured experiences and miracles that a number of Kalki Bhagwan-Amma devotees had experienced in their lives.

There is a woman in Orissa who was healed of her cancer by Kalki who reportedly visited her in her sleep and who in turn has been healing a lot of sick people. She credits Bhagwan for restoring her health, as well as her healing ability