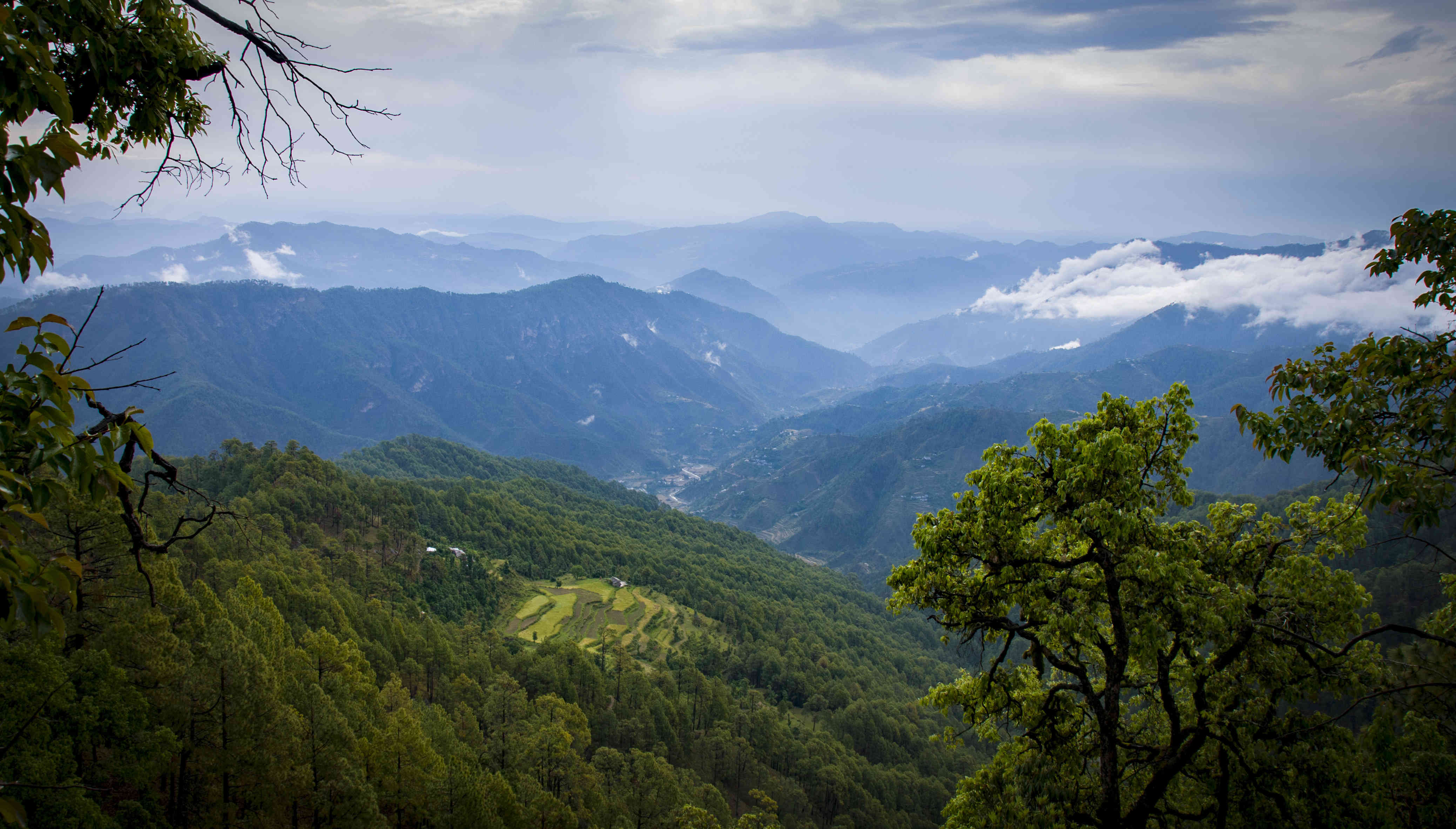 Nandini Hoon travels to the Jageshwar temple town near Almora in the Kumaon region of Uttarakhand and finds it to be breathtakingly beautiful and spiritual.

A ‘Jyotirling’ in Sanskrit means a pillar of light. It also signifies Lord Shiva, revealing himself to the devotees in the form of jyoti i.e. light. There are twelve sacred Jyotirling shrines spread across India.

Situated in the hamlet of Ranikhet at a height of 13,000 ft., in the deep deodar jungles of the Kumaon valley, is the Jageshwar temple town which has within its complex more than 124 temples and around 108 Shivlings. Also present in this temple complex is the eighth Jyotirling—the Nagesh Jyotirling—of the twelve Jyotirlings, dedicated to Lord Shiva.

People from all over the country visit this temple town to offer their prayers and worship Lord Shiva who is said to dwell in the Shivlings. In the temples, one can feel the powerful energy of the Rudra Abhishek which is performed to venerate the Supreme God. Rudra Abhishek is hailed by all Vedic scriptures as one of the greatest pujas for all-round peace and prosperity. In this puja ritual, Lord Shiva is worshipped in the form of a ling and abhishek (the ritual of worship) is performed with different articles like flowers, Bel patra (leaves of the Bel tree), milk, coconut water, honey, curd, sugarcane juice, etc.

According to legend, the place is amongst the most revered in the country as Lord Shiva had selected this place for his tapasya (meditation) and had also blessed it after slaying the demons who obstructed his tapasya.

The call of Jageshwar Dham

To breathe in the pure air of Kumaon and behold the mighty mountains, I planned a trip to Jageshwar, the Divine place, reverberating with the all-powerful Shiva energy.

Our journey began by travelling to the quaint hill station of Ranikhet, in Kumaon region. A couple of my friends and I decided to stay in Hotel Woodville during our five-day tour. Our hotel was located on the outskirts, closer to the hills. Taking a train from Delhi, we reached Ranikhet by noon. The drive from the Kathgodam station to Ranikhet was through the dense forests of poplar and deodar trees that turned to pines as we neared Ranikhet. Driving into Ranikhet, we sighted a few shops selling woollen shawls and caps, and I made a mental note of purchasing a few on our way back. I learnt from our taxi driver that these woollen items were woven by the locals themselves on looms, and I added another place to visit to our itinerary—the looms.

The stopover at Ranikhet

At Hotel Woodville, we checked into clean and neat rooms with an attached bath. After refreshing ourselves and leaving our luggage in our rooms, we gave in to our hunger pangs and made a dash for the coffee-shop, where a buffet breakfast awaited us. The tantalising aroma of hot coffee was such a temptation that I gulped down two big cups and realised pretty late that it was mid-noon and half the day was almost over!

Sometime later, we decided to go for a nature walk to enjoy the scents and sights of the beautiful place. So, with our cameras and backpacks, we walked down the road to explore the beauteous region which is a visual treat.

On the way, we came across a pretty eating joint called The Cafe managed by an army man and decided to stop there for our afternoon meal. It was fun to choose from its interesting menu of continental, Italian, and Indian cuisine. Being a foodie, I had a hearty meal of pancakes and brownies accompanied by a hazelnut cold coffee. A chat with the owners revealed that The Cafe also offered bed and breakfast packages to tourists. With the mushrooming of similar cafeteria around the entire area, one gets the opportunity to explore and feast on not just local cuisine but also other fare that is a gastronomical delight!

The whole environment of Ranikhet simply leaves one mesmerised. Primarily a cantonment town with a sprawling golf course, Ranikhet, true to its name, is full of lush green meadows nestled amidst the tall deodar trees. The following day we decided to visit the ancient Shiva temples at Jageshwar.

Hiring a 15-seater tempo, we left at nine a.m. the next morning for what was a two-and-a-half-hour journey from our hotel. We reached Jageshwar around 12 noon and everything that I had read about the place was there right in front of me to behold! The magnificent beauty left me and my friends spellbound.

We toured the entire complex and paid our respects at all the temples. The priests then guided us to perform the Rudra Abhishek that lasted for about 15 minutes. A sense of well-being, happiness, and elation enveloped us all, and the energy was such that I couldn’t stop myself from performing a dance recital in front of the Lord Himself. The energies here are so strong that they seep to your cellular level and create an unusual sense of contentment within. When it was time to go, we did not really want to leave the place but had to return to the hotel before dark.

It is said that in earlier days, Jageshwar was preserved and guarded by the kings of the Chand dynasty of Kumaon. One can see the statues erected in the memory of the family inside the temple complex. Today, the temple site is protected under Indian laws and managed by the Archaeological Survey of India (ASI). The temple is built according to the North Indian (Nagara style) of architecture. Visiting the Jageshwar temples is considered no less a pilgrimage than the ‘Chaar-Dhaam’ yatra because of the power and purity of the place which is believed to change the karma of the numerous past lives.

More than 25 inscriptions from various periods can be found on the temple walls and pillars, the script being mostly Sanskrit and Brahmi. Jageshwar, with its enriching history and the smells of the deodars, makes you feel the presence of the Lord himself and the vibrations of his damru (a small two-headed drum).

Nature’s oneness with the Divine

Finally, we said goodbye to the pious land of Jageshwar with serenity in our hearts and the hymns of Lord Shiva in our souls. The drive back was scenic, pristine, and soul-stirring. On the whole, this trip to Jageshwar left me fascinated and wonderstruck about the knowledge that nature and Divinity could be one! As my heart sang the song from the Hindi movie Kisna—“Hum hain iss pal yahan...” I surrendered my soul at the feet of Lord Shiva and remained within the bliss forever.

Travel agency: Heritage Getaways, a destination management company in New Delhi facilitated this beautiful experience of Jageshwar and made my dream of visiting the most venerated spot of Lord Shiva come true.

Few pointers for the travel itinerary:

Rail Travel: It takes 4–5 hours by train from New Delhi to Kathgodam station. A taxi ride from Kathgodam to Ranikhet takes three hours and finally a further three-hour journey from Ranikhet to Jageshwar.

Road Travel: By road, it’s a 10-hour drive from Delhi to Ranikhet. Ranikhet to Jageshwar by car is a 2 ½-hour drive.

Air Travel: It's a two-hour flight from Delhi to Pantnagar. From Pantnagar to Ranikhet the road journey takes 3 ½ hours and from Ranikhet to Jageshwar it’s a further 2 ½-hour drive.

Best time to visit: From April to September.