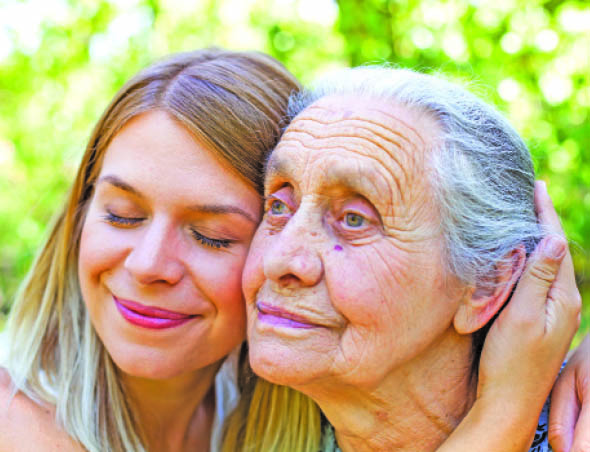 After the initial ordeal of coping with Alzheimer’s in her family, Aruna Joshi emerges triumphant as a spiritual warrior

I wake up from my deep sleep due to the hammering on my bedroom door. Startled and confused, I switch on the light by my bedside to check the time. It is 1.30 a.m.! My pulse racing, I open the door. And what do I see?

My 80-year-old mother-in-law standing there, trying hard to hide her anxiety behind her smile. Pulling me by my hand she says, “C’mon, let’s have dinner.” I stand there, astounded, trying to make sense of what she just said. Not knowing what to do, I wake up my husband and together we try to explain to her that it is past midnight and all of us have had dinner at 9 p.m. But all our efforts go in vain as she relentlessly tries to convince us otherwise, and we finally yield to her request.

Then, at 2.30 in the night, I make chapattis for her and serve her with left-over veggies from dinner. Well, the issue doesn’t get resolved yet. She insists that we all should dine with her. Seeing no point in any kind of logical discussion, we act as if we are having food. Then the whole episode ends with her cuddling into her comforter like a baby, wishing us ‘Good Night’ and telling us to sleep peacefully! My husband and I lie on our bed wide awake, staring at the ceiling for the rest of the night; numb, perplexed, and worried.

This was the first of the many incidences that sent chills down our spines.

It all started with her slowly forgetting simple things like her glasses or hearing aid or forgetting names and days. It didn’t seem that critical in the beginning, but as the frequency increased, it was a matter of worry. Sometimes she would talk about things that didn’t make logical sense.

Slowly, she started forgetting the people around her. If any of our relatives visited us after a long time and asked her, “Did you recognise me?” Her standard response would be, “Of course, how can I forget you? I am seeing you after so long. How are you and how’s everyone at home?” The visitor would be happy with her loving and caring response, and she would be pleased to have saved herself from the embarrassment. Later, after they left, a flood of questions would come our way: “Who was he? Where does he live? Why was he here?” and so on.

Dementia Creeps In
Her doctor told us that she was suffering from age-related dementia. It generally impacts the performance of daily activities, communication abilities, and memory. Gradually, it got worse when she started forgetting us family members. Sometimes she would mistake her husband for her father and talk to him accordingly. Other times she would question, pointing a finger at him: “Who is this stranger in my room? Ask him to leave.” It used to be highly disheartening to hear this every time. They were in their 55th year of marriage then. I could see the pain in my father-in-law’s eyes. We realised that this happened more when he wore jeans and a T-shirt. In such situations, he would go to the other room, change his clothes to pyjama-kurta (as she could relate to him in those clothes), go out of the house, ring the bell and come in with a fake smile and tell her, “I had gone down to get something and just came in.” And she would believe him and say, “Why did you take so long? I was worried as I did not see you for a long time.” Then he would make up a fake story. At the end of this discussion, I could see my father-in-law secretly wiping away the tears about to roll down from the corners of his eyes. This had become a recurring phenomenon. It started to take a toll on my father-in-law’s health too. Over time, he became more caring and protective towards her and would do anything in his capacity to make her happy. He would say, “She has forgotten me, but I have not.”

Alzheimer's Sets In
While she was being treated for dementia, her neurologist broke the news about the onset of Alzheimer’s. He informed us that it is a progressive disease that destroys memory, important mental functions, thinking, and behaviour. Symptoms usually develop slowly and get worse over time, becoming severe enough to interfere with daily tasks. Her doctor was treating her only to delay the progress of the disease, as Alzheimer’s does not have any cure as such.

Her behaviour and conversations were incomprehensible to our rational minds, but this was the given situation in our life which we needed to handle with care. As the disease progressed, the frequency of her visits to her past increased. She would often talk about her childhood memories, her school, and her parents but could not remember what happened the previous day or even what she ate for lunch. The description of the incidences and the memories were so vivid that it would often surprise all of us.

The part of the brain responsible for logic and reasoning gradually switched off. The surprising part was that she stopped feeling the tremendous knee pain that she had previously. It was a revelation of how our physical pain is related to our conscious mind—the mind responsible for rational thinking.

As fate would have it, she suffered a paralytic stroke while in the advanced stage of Alzheimer’s, which confined her to bed. She was battling a lethal combination of progressed Alzheimer’s and a stroke. After this, she lost almost 90 per cent of her memory.

Gradual Deterioration
To our dismay, she did not even realise the passing away of her husband who was so dear to her and without whom she could never imagine her life. Not even once for the one year she lived after that did she even ask about him. Towards the end, she also lost her vocabulary. The only thing she could understand was the language of love and touch. She passed away on 27 May 2019, to join her husband in spirit, releasing herself from the trauma she was going through within the confines of her body.

This was one of the most challenging phases of our lives. An Alzheimer’s patient becomes entirely dependent on the people around for every small thing. In such cases, the caregiver has a hugely challenging task to handle someone who is losing memory, cognitive abilities, and continence. As this is a slow process, the patient is also confused about the changes happening within. There is usually a lot of resistance to surrender to this dependency.

The role of a caregiver in such cases is pivotal but very demanding and taxing too. It puts your mettle to the test. You are dealing with someone who doesn’t talk or understand your language and is incongruous and incontinent. However, viewing it from a higher perspective, it is also rewarding. It gives you an opportunity to balance your karmic debts, work on yourself, and grow spiritually. It is difficult to appreciate this aspect when you are entwined in the situation. You can understand this only when you detach yourself from the state you are in and look at the whole experience from an observer’s standpoint.

Difficult Times
Since I was deeply involved in the situation, it was initially difficult for me to comprehend this viewpoint. During the same time, my father-in-law was also in and out of the hospital. My husband and I were taking care of two old patients. We were battling with emergencies practically every day. It was a full-time occupation. It was highly overwhelming for me, as other than looking after my in-laws, I was multitasking—taking care of my career, home, finances, and entertaining visitors coming to meet them. We hired help, but the entire responsibility still lay on us.

During this phase of my life, I had my worst emotional outbursts. I felt like a fish fruitlessly attempting to swim through a mesh, totally bogged down by everything that was happening around me. Initially, I was in the ‘God, why me?’ phase. For a while, I whined and complained about it, but slowly it dawned upon me that the only way out of it was to pass through it. It took me a while to come to terms with this thought, but once I did, my journey was different and comparatively easier. I started seeing things from an elevated perspective. I viewed the situation as one of the experiences of my life. This gave me space to also see things objectively. That was when I could actually feel the suffering my mother-in-law was going through. I could empathise with her. To my surprise, our relationship rose to a different dimension.

After that, my approach towards her was more of love and patience-based, as that was the language she understood. While taking care of her required a lot of endurance, I had to deal with my unresolved emotions, such as anger and hurt which surfaced from time to time. Well, nothing comes easy in life, especially the life lessons. My caregiver role taught me many lessons, the most important being the real meaning of unconditional love. The patience that I developed was a bonus!

Who Are We?
Some of the important yet nagging questions I faced during that time were “Who am I really?”, “What is my identity?” and “Does my identity change with time?”

I realised that we closely identify ourselves with our physical body and the labels attached therein, but they change with time. Those who first met my mother-in-law during this phase of her life could not believe that once upon a time, she was a fiercely independent and confident woman who could take charge of any situation and also be a support to many. It’s an irony that her identity changed with time.

Throughout our life, we carry labels and develop pride in certain things such as “I am an engineer,’ ‘I am rich,’ ‘I am beautiful,’ or ‘I am intelligent.’ However, often, life takes us by surprise. And all the things we are proud of become null and void when a disease like Alzheimer’s takes over. This experience left me more humble than before. The things that we claim are ours just leave us one day, even our body. It showed me how transient life is! I learned to be grateful for every small thing I had.

Most often, we live a life full of guilt, regrets, fears, and insecurities, not realising that every moment is passing by. Living in the shadow of Alzheimer’s taught me to live in the present moment. The future is unpredictable and the past is gone, but the present is the only moment that is. This is where life happens.

It was definitely not an easy journey, but in the end, it was totally worth it.