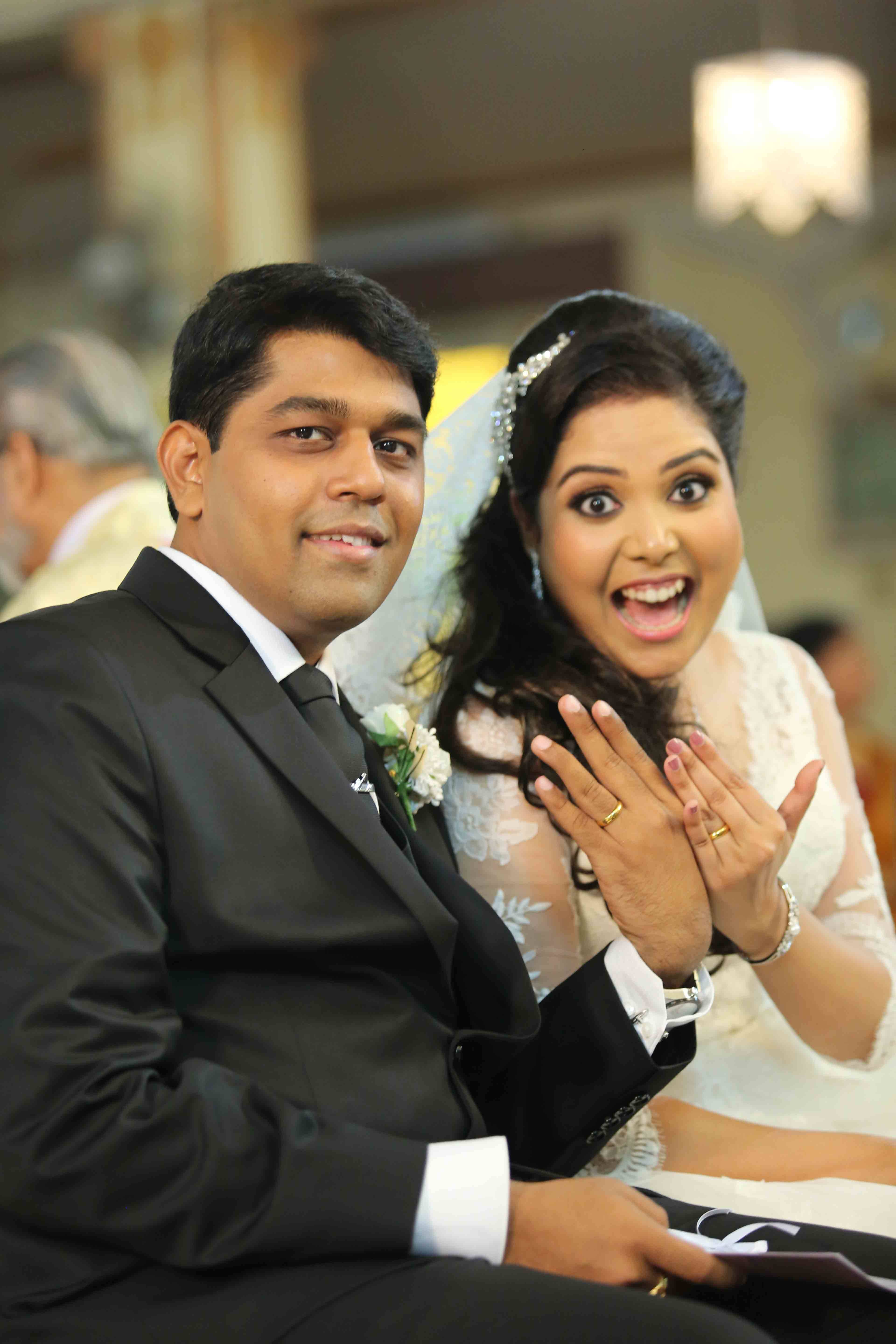 A newly-wed Melissa Nazareth explores ways to ensure that the rose-tinted honeymoon phase continues long after you are back to reality.

“Can you please rinse your plate when you put it in the sink?”

“No, I can still see curry marks on it. I feel dirty to wash it.”

It’s about time my husband and I patent the above dialogue. Only problem: there will, I’m sure, be numerous other couples ready to sue us because they believe it’s theirs! This is just one of the many petty disagreements my husband and I have had over the past one year. Thankfully, we’ve learned to work our way around it. No, he still doesn’t rinse his plate, but I love him despite that and gently remind him to clean up every now and then. In turn, he has stepped up his game and (almost) wholeheartedly shares the load of household chores with me.

It feels like yesterday that I wore my big white gown and walked down the aisle. I can’t believe our first wedding anniversary is round the corner. While most newly-wed couples would call their experience amazing, blissful, exciting . . . we believe ours has been all that but also a rollercoaster ride, one that we’ve only begun learning to truly enjoy. I said yes to my husband when I was 29, an age when most women, at least Indian, see marriage as a practical decision and not a fairytale. That’s not to say I didn’t love my husband before we got married. In fact, I’ve known him (or so I thought!) for almost two decades—we’re family friends. That’s longer than most marriages last these days! Having tied the knot at a ‘mature’ age, I thought I was ready to dodge any curveball that life would throw. I stand corrected. Living under one roof is a totally different ball game, and no matter how well you know each other, or how long you’ve dated, or how understanding and tenacious you are, navigating marriage is hard work. Although it is not possible to avoid conflict entirely, being aware of typical marital issues and how to handle them, helps.

Mumbai-based, couples and family counsellor, Dr. Prerana Dharnidharka, PhD., says, “The types of issues couples fight about tend to depend on the stage of the relationship they’re in. But some common issues that all couples fight about include family, children, money, sex, and time spent together. In the newly-wed phase, however, it is more important how they fight than what they fight about. The more couples communicate openly and solve problems in a positive, flexible manner, the better they handle the transition to marriage. Complaining, whining, and blaming, on the other hand, are unhelpful ways of fighting. Dr. Prerana also advises couples, especially those going to have an arranged marriage (as they usually have relatively less time to get to know each other before marriage), to clearly communicate their expectations from life, the marriage, and each other as well as the values of life and marriage that they hold close.

Societal pressure, if not handled well, can wreck marriages. It’s worth mentioning that this includes pressure and interference from family and friends. “Create boundaries between the marital relationship and the rest of the world, together,” advises Dr. Prerana. “In India, families tend to be more involved in a couple’s life and relationship. Couples must decide together how much influence and involvement from their families they will allow. For instance, if the couple has a fight, do they talk to their friends and family about it? When they decide to have children or buy a house, how much say do they give to their family members? There is no right or wrong way, but it is important for couples to decide these boundaries together. Common signs that there is too much external involvement, include partners talking about everything that happens in the marriage to others, and friends and family becoming referees in their fights.” Dr. Prerana clarifies that it is not to say that we break all ties just because we’re married. We need support systems but must prioritise and balance our relationships. My husband and I attended a marriage preparation course, mandatory by the Catholic Church, where we were advised to always prioritise our ‘primary relationship’ i.e. our spouse. Initially, it was very difficult for me to do this as I am an only child habituated to sharing most things with my parents. I didn’t have an ulterior motive when I told my parents anything but, over time, realised that it was hurting my marriage. My husband openly communicated to me that he expected a certain amount of exclusivity. I worked on his feedback and, today, we share a stronger bond and deeper trust.

In addition to setting boundaries, Dr. Prerana lists two more ‘tasks’ that couples must focus on: ‘Accommodating each other.’ When people from two entirely different backgrounds come together, conflict is inevitable. The trick is to adapt to habits and rituals, and create new ones together. One of the best pieces of advice that I’ve received when it comes to successful accommodation is ‘observe.’ Instead of nitpicking, spend the initial phase of your marriage observing each other’s habits and personalities. It will help in avoiding petty fights every now and then and give you time to truly understand your partner.

‘Maintaining equality in the marriage’ is another ‘task.’ Says Dr. Prerana, “Research in the West shows that couples who are egalitarian when they are dating, tend to fall into traditional roles when they get married. This is especially true once they have children. This means that women become responsible for household tasks and child-rearing and men become responsible for providing. Getting stuck in traditional roles can create unhappiness for both partners but affects women more. Especially because women often end up doing it all—taking care of the home, going to work, and doing all the heavy lifting of parenting. In this case, they may not have any time or energy left for the marriage, affecting the happiness of the husband and the marriage overall. It is important, therefore, for husbands and wives to talk specifically and clearly about their expectations from each other. And it’s equally important to discuss how they will share household responsibilities.”

Jasline and Roshan have worked out the equality aspect well. Married for seven years, they share a long-distance relationship as Jasline works in Mumbai and her husband is a Captain in the Merchant Navy. “I have a very busy life, juggling work and home single-handedly for six months in a year. Commuting in Mumbai makes it busier. My husband sails and is away for long periods, which is emotionally daunting, especially for him because he has no family members around. Moreover, the work he does is physically quite challenging. Initially, we spent a lot of time arguing as to who had the tougher life. But in our hearts, we valued each other’s efforts and so, gradually, put our petty fights aside. We prioritised our marriage over proving a point. We get so little time together and wasting it on arguments was not worth it. We have accepted our individual roles and responsibilities in our marriage. I give my husband all the emotional support when he is away, and when he comes down, he lends me a hand so I can relax a little. In fact, distance has made our hearts grow fonder and kept the magic in our marriage alive, just like when we first met.”

Recreating the magic of marriage

The ‘Magic of Marriage’ is one of the many programmes that inspirational speaker, Manoj Lekhi, facilitates for Siddha Samadhi Yoga—the rediscovery of the ancient Vedic science of effortless and joyful living, founded by Guruji Rishi Prabhakar. “My wife, Nina, and I are diametrically opposite to each other,” he says. “She loves partying, for instance, and I prefer being at home. Despite being poles apart, we have been happily married for almost three decades, thanks to Guruji’s guidance and are so united in spirit that we call ourselves married forever.” Manoj highlights that if couples go ahead with the understanding that men and women are wired differently and think differently, they will be able to deal with issues, better. Some of the points he makes and the advice he shares during the workshop are: Most men are left-brained while women are generally, right-brained. Left-brain qualities include being more logical and calculative in contrast to right-brain qualities which include being intuitive and spontaneous. During a fight, for instance, men usually speak about the disagreement in question and don’t deviate, whereas women who are more inclined towards the smaller details may bring up past issues. Secondly, women must be treated like children. For instance, if she cries suddenly or throws a tantrum, don’t try to intellectualize the situation; rather, let her be herself. Men, on the other hand, must be treated like ‘innocent puppies’, constantly appreciated and not reprimanded. Thirdly, when men are stressed, they must be given their space and left alone. Women, on the other hand, must be lent a listening ear without offering advice (again, a left-brain quality). Fourthly, express affection. Everyone has got an emotional tank that needs to be refilled constantly. There are different ways of expressing, like spending quality time together, verbal appreciation, gift-giving, and physical touch. It’s important to note that we must identify which mode of expression our partner prefers rather than what we prefer when we express affection for our partner. The marriage preparation course that my husband and I attended referred to these modes as ‘love languages.’ Lastly, Manoj says that we must understand that there are levels of marriage—using each other, having respect for each other, trusting each other, having reverence (love or bhakti) towards each other, and surrendering to each other. No matter which stage you are in, you will evolve, provided you give things time and make a conscious, systematic guided approach. “It involves a commitment of one hour every day to live in a happy relationship post the ‘Magic of Marriage’ programme,” he adds.

Dr. Prerana seconds this point saying that couples must be active and intentional. “Couples tend to get complacent in their relationships and start functioning on autopilot. It is then that hurt and resentments build up. To avoid this, it is important for couples to be active in resolving problems as they emerge. And to reflect on the type of marriage they want and intentionally work towards that goal.”

I don’t know which stage of marriage my husband and I are in. But what I do know for sure is that we’ve evolved. We’ve learned that love is a choice that we need to make every day. Like American journalist Mignon McLaughlin said, “A successful marriage requires falling in love many times, always with the same person.”

Tips for a successful marriage