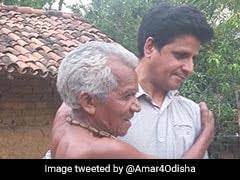 A rupee goes a long way

When people see difficulties around them, some feel sorry for themselves while others vow to ensure that they overcome them and provide hope to all.

“I am a doctor and my work is to help all who come to me for assistance, whether they have money or not,” says Dr Shankar Ramchandani from Odisha. His father, who helped 23 family members with limited income, could not help his uncle and grandfather who were suffering from cancer. This made him request all his children to try and become doctors to help the poor. One of them did take this up as his responsibility and become a doctor. This was not easy, but Dr Shankar Ramchandani persisted with vigour.

They were a family of five sons and four daughters. He was the fifth son. They lost their father in 2001, and his eldest brother had to take all the responsibilities. Due to meagre financial means, he depended on hand-me-downs from his seniors but, through sheer grit, scored the second rank in Odisha state during his medical entrance test.

His own life was a lesson to him. He wanted to ensure that others did not have to suffer the way he and his family did. He started what he called a ‘One Rupee Clinic’ in Burla in Odisha’s Sambalpur district to provide treatment and medicine to the poor and underprivileged people. He charges that nominal fee of one rupee to give dignity to the poor.

He also works as an assistant professor at Veer Surendra Sai Institute of Medical Sciences and Research (VIMSAR), Burla, but still manages to find time for his clinic after work hours. His wife, a dentist, also supports his mission wholeheartedly. On average, he sees 20–30 people a day. This makes him feel wonderful both as a doctor and a human being, for these people are so poor that no one usually bothers about them and they just remain mere statistics. He is able to give hope and relief to the helpless and poor and feels that he has fulfilled both his father’s dream and the true purpose of becoming a doctor.

Kudos, Dr Ramchandani, for being who you are.