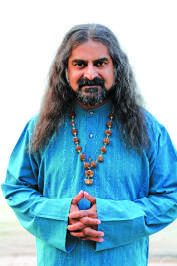 Merging with the light

Merging with the light

Founder of Ammucare Charitable Trust, Mohanji is a contemporary spiritual master who delivers the most profound truths with laser-sharp clarity, simplicity, and humour. He shares the remarkable story of being born again in this lifetime, with the readers of Life Positive

This incarnation, like that of everyone, has had its distinct stages. Mine was the impressionistic and explorative childhood, the usual confused state of youth trying to figure out what to do on earth, and the auto-positioned adulthood, where a clear realisation that nothing is in my control and hence nothing mattered anymore. This is my personal life put in a nutshell. It is impossible to segregate a spiritual aspect out of the above stages, except that the essence of the experience that came out of all these passing phases was that everything was temporary: Had it. Felt it. Left it. Carrying any bit of the past is stupidity because life is all about experiences and expressions and they, like past newspapers, have no value beyond its time of happening.

A challenging path ahead
Positioning myself in a conditioned society was perhaps my biggest challenge. Society is conditioned and structured by concepts, mostly religious beliefs and associated concepts including that of heaven, hell, sins, and redemption. In this society, positioning means conforming to the two dimensional ‘approved and permissible’ boundaries of expressions. This is impossible for any ‘mindless’ being like me because structure literally means imprisonment of expressions. Conditioned expressions are equal to a state of death. In that context, positioning means compromising.

I wrote the above two paragraphs here because I know that many true lovers of the spirit in us might have experienced the same dilemma when their inner connection intensified at some stage in their life, especially when uniqueness of personal experiences became incompatible with the ‘permitted concepts,’ set by minds and not by ‘mindless’ beings. The mind cannot understand the absence of itself. Those who understand what I am talking about can make some sense about what I am going to write ahead. If you look through the eyes of information that you have gathered from books, the human-created ‘permitted’ and acceptable spiritual ‘opinions’ may not even subscribe to it. This is the positioning difficulty that I am talking about, which most of us constantly experience when we walk the path of liberation, and this makes us tread a path of unique aloneness. Aloneness is not a negative situation, except when we have to live and walk this earth of treacherous tracks with cunning and manipulative guides. Sometimes, they take us through so many detours before we realise that precious time has been wasted for nothing while we walked with a guide with a selfish agenda. This was part of the journey. Most of us fear it because we have not walked this path (of aloneness) before and we may not have thought that walking this path needs no help. It is us, ourselves, the journey which is absolute by itself; the destination is ourselves. In short, the method is unique to oneself, the path is us, the goal lies within us, the destination is us, and most importantly, this is all happening at the same time. That means the path, the traveller, the journey, and the destination are all one and the same.

Silence is the way
Less external activities and compulsive rituals, through deepening silence created by thoughtlessness, will make us realise this truth. Only one thing can help us in deepening our awareness: there is nothing to prove to any ‘minds’ around, and no approval is needed from any ‘minds’ around us. When they do not understand our explorations, the meaning and reasons, there is no point in expecting any understanding from society either. Also, beware of social approvals, opinions, appreciations, titles, following, name, or fame. They can all be hindrances in stabilising us in ourselves. All things, except silence due to lack of thoughts, are hindrances to actualisation.

Burning my self
My exploration of the subtler aspect of myself intensified and became a priority by the year 2000. My personal time of the day used to be between 3 a.m. and 8 a.m. I used to withdraw myself into the shell (a room) that I had created like a cave in my house, with just a lamp and nothing else in that space. The flame of that lamp used to be my path, my destination for concentration. I used to burn every aspect of myself as oil in that lamp, just like we perform fire ceremonies. Thus, I used to sit in a dissolved state of total insignificance. Days and months, I concentrated on burning every aspect of myself, offering all my stored materials such as feelings, emotions, pains, sorrows, concepts, likes, dislikes, insecurities, ownerships, loves and prejudices (including personal boundaries) into the fire. As the fire swallowed more and more, I started experiencing a concept-free empty space within, where I lost all compulsions to think, talk, or act. Freedom started blossoming. A deep urge to serve the society took shape within that void, empty of weeds and the clutter of noisy thoughts.

The explosion
I used to go and serve in an ashram of a saint whenever I was free from work in the early 2000s. Even though I was working, I never traded my time between 3 a.m. and 8 a.m. ever. I was quite ‘selfishly’ guarding that privilege that I gifted myself.

One day, at this ashram, I started feeling unusually unwell, right after breakfast. I tried to hide my state from others by trying to be natural. By evening, this state intensified. I got a chance to meet and talk to the saint by that evening. He probably understood my state and suggested that I rest a bit because I had been serving all day. It so happened that I could not get out of that place due to some reason or the other. Then the saint told me to walk with him within the campus, just the two of us. He used to discuss some administrative matters with me at times to get an external opinion for an objective decision. Our conversation began like that. Soon, I could not hear anything he was saying. We were walking. My body was auto-responding. But I heard nothing, even my eyes became blurred, and I also saw nothing. Yet, I was walking with him. All I remember is reaching one of his guest houses. He opened the door, I sat on a chair at the dining table, and a huge explosion happened inside. That explosion is difficult to explain in words.

I became light. Just brightness. Just light. I could only feel myself as pure light with no matter. The expanded state had no boundaries such as body, earth, or galaxy. I could connect with all the galaxies inside me even though I could not see. Even the sun felt very dim within my native brightness. I probably sat like that for a few hours. My first memory of a reluctant return into the current reality was the saint calling out to someone (in the neighbouring guest houses), “Come, come, SHIVA is here.” Then I could feel flashes of cameras as I returned to my current incarnation. It felt like I was squeezing into a dress that I wore in class one. Tight and uncomfortable. This experience lasted in intensity for long. It exists even now. Thus Mohanji was born—beyond and without boundaries.