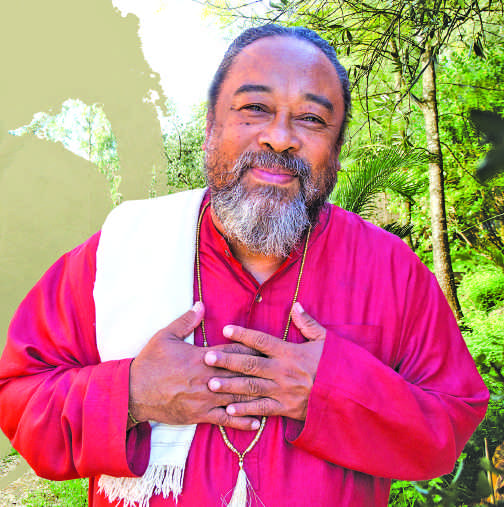 When I first heard from my niece that Mooji Baba was coming to Rishikesh in February 2019, my first reaction was “Oh, how wonderful! How I wish I could go. But, of course, it is impossible!”

And so I shelved this thought as it meant taking four or five days off from the school where I work as a teacher, making arrangements for my mother’s care (as my sister and I are her prime caretakers), booking flight tickets to Rishikesh... Well, the problems seemed endless. So when my sister asked me if we could go, I reluctantly but convincingly gave a “No way!”

But then life had other plans for me, and soon I was swept away by its flow. Things miraculously unfolded, so much so that it looked like everything was being arranged for me. I was not the doer anymore.

It all started with a visit from another sister, who stopped by at Chennai en route from Rishikesh. As she spoke about the Ganges and the ashrams, the thought that hit me was “It is not as difficult as it sounds. If she—being the principal of a school—could take off and spend a few days at Rishikesh, would it be so difficult for me?” This thought shifted my energy so much that I began making plans for the trip. Getting leave (which initially seemed like a mammoth task) was easily settled as I zeroed in on the four lean days when I would not miss important classes or events at school.

The next things to fall into place were the arrangements for my ageing mother’s care. A cook was hired at short notice and my husband and brother-in-law agreed to take care of Mom while my elder sister and I took off.

Luggage loss in Rishikesh
Before I knew it, the leave was sanctioned, tickets were booked, and off we flew one February morning to the land of rishis. But when we landed at Dehradun, we were met with the news that our luggage hadn’t arrived! The airline promised that it would be delivered at the Shivananda Ashram (where we would be staying) by evening, and as there was little we could do about it. We surrendered to Life and prepared ourselves to enjoy our four days at Rishikesh.

As all our clothes and foodstuff were in the luggage that was lost. We spruced ourselves up as best as we could at the ashram kutir (cottage), had tea and snacks at the Madras café, and rushed off over the Ram Jhula (bridge) to Parmarth Niketan to catch the famous Ganga aarti.

Perhaps Ganga maiya wasn’t bothered about my dishevelled appearance for she gave me the greatest gift I could ever wish for. As I performed the aarti; she rubbed off a little of her sense of flow onto me, and this is what I carried back home from her.

That night, as we had our dinner, there was still no sign of our baggage. We wondered how we would make it to the satsang the next morning as it would be too late to buy new clothes. Leaving it to Life to sort out things once again, we hit the bed, only to be awakened at midnight by a call on my sister’s mobile. The ashram security guard had accompanied the airline staff to personally fetch our luggage! Life flowing in my favour once again! And perhaps, it was because we had cheerfully accepted the unpleasant that Life began to roll out the opposite for us.

Miracles of Mooji
The next morning, we joined the queues that had gathered to enter the Swami Swatantranand Ashram where the satsangs were taking place. It was a cold misty morning, and it did feel like a blessing when someone offered us all some hot chai as we waited. The true Indian way of helping and serving pilgrims! This continued for the next three days. It was an experience like never before. Waking up early and rushing to the ashram to join the queues. As we became a part of a group of people from all over the world, I realised what it meant to be a citizen of the world. There were people of different religions, ages, sizes and differently-coloured skin and hair, but we all felt like one universal family—Vasudhaiva Kutumbakam. All had one goal: to find themselves and get out of the egoic conditioning under the aegis of a master.

There was no pushing or shoving. Everything was perfectly organised.The queues were guided, bags were checked, lines were formed, and we were sent in after a pick as to which line would go in first. The lines which went first, of course, had front seats and had a closer view of the Master.

The first two days—wonder of wonders—I was in the first two or three lines and got front row seats. The mornings were spent in soaking up the energy of the Master and all the gathered devotees. The energy of the place was so strong that I felt feverish in spite of the cold weather. On the third and my last day there however, my line was almost last, and I found a free chair somewhere in the middle of the huge hall. I consoled myself by recalling the words of Mooji Baba, who specifically discouraged people from rushing out to have his darshan (view), exhorting them to get his message instead, which reiterated that we ourselves are the Self and we need no one outside of ourselves to bless us.

“It’s ok. I shall just sit here and listen to him. I am That after all,” I told myself, and this helped calm my mind. But again, when I fell into acceptance, Life unravelled all the plans it had up its sleeve. I happened to be sitting next to a window and lo and behold, I got to know that Mooji Baba would cross that window on his way to the satsang platform!

My sister and I found ourselves gravitating towards the window along with others as the crowd, sensing his arrival, became alert with anticipation. My heart stopped as Mooji Baba stopped by the window, his arm full of roses. Then, he began handing out the roses to the ones by the window. Before I could realise what was happening, I had received a beautiful yellow rose from him. As I stared into his compassionate face, all I could feel was deep gratitude to Life for bringing me this moment—a moment of completion where I wanted nothing more.

Many of us who got roses were thrilled beyond measure. While I knew it was only my mind that was getting excited and I was the Self anyway, with or without this experience, I must confess I felt it was okay to be unabashedly excited and to savour these precious perfect moments that appear only rarely in our lives—moments that clearly reflect our innate perfection. I wouldn’t hanker after them but if Life threw them my way, who was I to say no? (wink, wink).

My cup runneth over
It didn’t stop there. Life was rolling out its best for us. We were treated to a sumptuous lunch those three days by the inmates of the Narayana Ashram which was sponsoring lunch for the devotees of Mooji Baba. I have read so much about this land of the rishis where anyone who is in search of the transcendent is always supported by the people there. And here I was, actually getting a taste of that life and food! Sitting with a group of devotees at the dining table on the banks of the Ganges and watching the towering majestic Himalayas, I felt my cup run over. Truly, the message that Mooji gave was coming alive. It was nothing but Grace arising out of the great nothingness. Everything was unfolding as it should, and there was nothing I needed to ‘do’ to improve my experience. Life itself would give me what I deserved.

And something my friend Mona (who came all the way to Rishikesh from Dehradun to meet me) said also stayed with me:  “If you are in touch with the inner Self and flow like Ganga Maiya does, even ordinary water can become Gangajal  and ordinary moments, extraordinary.”

Was it Mooji’s satsang with a universal crowd or the flowing Ganga or the lofty Himalayas? I can never say, but as I flew back home, I knew that it was safe to let go of all control as Life had convinced me that it sure has my back! I realised something I had only read about a lot: accepting ‘what is’ without clinging to it if it happens to be ‘good’ or not resisting it if it happens to be ‘bad’ is the only way to rest in stillness, in our true Self.

And because Life gave me such a perfect and extraordinary four days at Rishikesh, I was ready to come back home and go with the flow—ready to embrace the ordinary as being perfect just as it is!