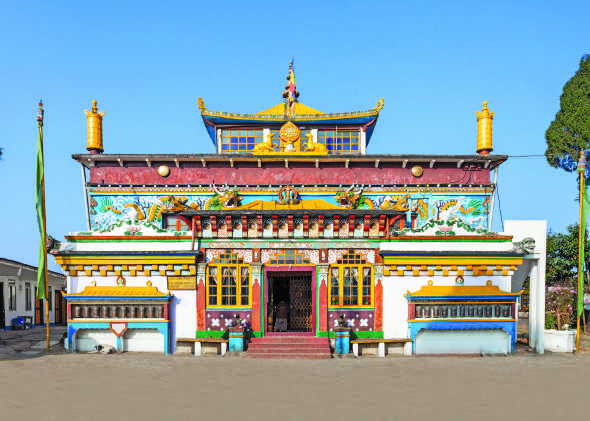 They say you sense God in emptiness, space, and nothingness. Yes, I had the same experience when I visited the most tranquil, unknown part of Eastern India. Despite my heart being heavy with daily chores, a space of emptiness and nothingness seemed to surround me.

I was aware of the Ghoom and Rumtek monasteries in Darjeeling and Sikkim, and to fulfil a long-held desire to see them, I visited these hilly regions once again. These areas have a special, beautiful energy, where all desires seem to end and the soul starts to speak.

So, on a cold, wintery, November morning, I took a flight from Delhi to Bagdogra, where I disembarked to proceed to the bustling town of Darjeeling, the location of my first stop—the Ghoom Monastery. It is situated a mile away from the Holiday Home, where I was staying. After bearing the dense fog of Darjeeling, I looked forward to the tranquillity of the Buddha at Ghoom. Large gates with two pillars on either side welcome you to the grand monastery.

The monastries
With the ferns and hilly vegetation, Ghoom sets itself apart from the rest of Darjeeling. Inside, besides a seating area for the monks (where they have their three meals a day), there’s a grand idol of the Lord himself, seated in deep meditation, which completely stills you and lifts your consciousness to a higher level. The air is filled with the sacred chants of Om mani padme hum and scented with fragrant incense sticks and flowers. The sprinkling of holy water on the visitors lends an inviting aura to Ghoom.

The monastery is central to the lives of the young monks and serves as a school where they learn the Buddhist teachings and practices. It has a heritage and history which dates back to the mid-18th century when it came up and the installation of the Buddha statue took place. Ghoom, with its traditional wall hangings of the bygone era, has stood the test of time. It has become a monastery where the essence of Buddhism has spread enormously.

Similar to Ghoom is the Rumtek Monastery in Sikkim, the next part of my journey, to which I proceeded. I travelled by car from Darjeeling for about three and a half hours, alongside the gigantic river Teesta, which flows all the way to Sikkim.

The beautiful countryside with waterfalls, hills, and sprawling highlands made the journey very enjoyable. I came across my usual favourite hawkers who were selling mouth-watering noodles mixed with onions and tomatoes. The wintery atmosphere enhanced the joy of eating locally-made noodles, after which I set off to explore the untouched beauty of the Rumtek Monastery.

To get to Rumtek, one has to station oneself at Sikkim and then traverse the countryside by car. Rumtek, located in the higher regions of Sikkim, was built in the 12th century and has carvings, sculptures, scriptures, and pictures of the Buddha, which talk about his entire life, right from his birth to his death. Large and sprawling with multicoloured prayer flags, it represents the very essence of the Buddha. It has multiple rooms: spaces for the monks to live and learn the tenets of Buddhism. Housing an altar of the Buddha—the Lord sits in a still posture, overlooking everyone with a gentle eye and a caring welcome—Rumtek has been the most visited spot by the tourists coming to Sikkim.

The winter here is bitterly cold with freezing winds blowing. Listening to soothing Tibetan music playing in my car, I reached the doorways of the monastery, which are heavily decorated in gold. It has a steep climb to it, and on the way, one can witness a pleasant sight—terrace farming, prayer flags, and various types of birds,which are fed with grains. A tall pillar inscribed with the essence of Buddhism welcomes you. The monks, wearing their deep red robes and chanting Om mani padme hum, had gathered to pay their reverence to the Lord. In the prayer hall, the local monk who looks after the monastery came to bless me with holy water and recited the holy chants of Buddhism.

The monastery had corners where the monks sat and had their meals and lived the Buddhist way of life. Rumtek gave me a new insight into life, believing, and living, with the divine chants filling my entire being with a sense of inner peace, tranquillity, and oneness. The worldly life with its accompanying desires seems to wither away in the light and love of the Buddha.

The ethereal experience
Ghoom and Rumtek left a deep impact on me, and I felt so one with the whole atmosphere,that it gave me wings to fly and experience the pure formless being of the Lord himself. I bid farewell to Rumtek and got back to Gangtok, where I stayed in an army accommodation. My last evening was spent on the pebbled roads of Gangtok’s main market, and I could hear the people`s laughter and chatter in the bitterly cold weather, having delicious food at cafés with Cantonese music playing due to the Chinese influence (China borders Sikkim).

My memories of Ghoom and Rumtek give me a delightful reason to remember my trip to the beautiful lands of Darjeeling and Sikkim. These places were the turning point in my spiritual quest as they made me experience the essence of Lord Buddha, who is the ninth avatar of Lord Vishnu and has been known and revered for his stillness, compassion, and love throughout the ages. It led me to the knowledge that Buddhahood dwelled within me,and I felt wholly one with it.

By air from Delhi to Bagdogra—2 hours

By car from Bagdogra to Darjeeling—2 ½ hours

By car from Darjeeling to Gangtok—3 ½ hours

Time to Visit: Between April and November