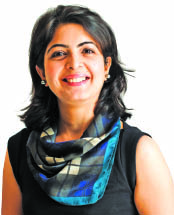 Feeling lonely and left out is common amongst the elderly. To end this problem and make the sunset years of the senior citizens happy, enriching, and productive, Nnaumrata Aurora Singh, a Mumbai based spiritual eco-feminist and a conscious-living coach has created Happiness Circles in her community, where the elderly come together, not to chat and do idle gossip but to grow spiritually, learn new things, and form meaningful relationships, says Roli Bhushan Malhotra.

What do a former English teacher, a retired block development officer, a Montessori pre-school founder, and a gold medallist in Chemistry have in common? They are all members of the Happiness Circle, a small community gathering, being run in a premier gated community in a Mumbai suburb. Their common goal? Seeking happiness through friendship and serving happiness in large doses that get you through the week!

Old and alone
In January 2019, at the World Economic Forum at Davos, loneliness was an important subject of discussion. Loneliness is a growing epidemic around the world, resulting in increased healthcare expenditures and reduced lifespans at alarming rates. Amongst all demographic groups, the elderly tend to be the most forgotten and often vulnerable to loneliness. While young children and the youth keep busy with their education and work, elderly people often find themselves uprooted from smaller towns, compelled to live with their offspring in larger metro cities, bereft of meaningful activities to engage in. Often feeling a lack of purpose, they strive to adjust and compromise to fit into the busy city life. Life can become mundane as age progresses, leaving them with little time for engaging in activities that bring them joy.

For Pamela Malhotra (66), it was a double whammy. Not only was she living with her son and his family, but they had just bought this apartment after staying in another suburb for a decade. “Everything was set and functioning like clockwork, at our old house,” she says, “including domestic help and recreation. Here, we had to start from scratch, which was quite exhausting, to say the least! Happiness Circles came into my life at this very point when I had started to feel a deep sense of loneliness and discontentment from within. While I was staying with my family and loved ones, I did miss the social connection and the liveliness that I had left behind in Jaipur.”

Filling the void
The idea of Happiness Circles was developed by Nnaumrata Arora Singh and Sharda Mangal under the aegis of the Charter for Compassion, India, Women and Girls sector. In one of their meetings, Sharda mentioned that while there seemed to be various organised activities for people of various age groups, there was a big void as far as activities for seniors were concerned. She had often noticed elderly women just sitting by themselves, feeling lonely, not smiling. This resonated deeply with Nnaumrata, whose own parents were now ageing and in another city. One thing led to another and, before long, a WhatsApp group was created, wherein information about the Happiness Circles was circulated, and the circles started at Nnaumrata’s home, comprising members living in the same condominium.

“They brought together senior ladies like me, who were looking for a few hours of like-minded company, and this was very convenient as it was within the condominium itself,” says Pamela Malhotra, former teacher and school principal, who has been an active participant of the Happy Ho (Hindi for ‘Be Happy’) Club, as it is called since its inception. “Close proximity to our home, made it easy for us to participate, as we just needed to walk across to the other block for these meetings.”

“We started out with seven members in the first week of October 2018. (The 1st of October has been designated the International Day of Older Persons by the United Nations.) We went on to having eighteen members at one point in time, with the oldest one being eighty-nine years old. While we do not have all eighteen in every meeting due to the varying availability of members, most weeks, we have been meeting every Thursday for one and a half hours. The kind of transformation that we started to notice in the lives of our members was so encouraging that we decided to start a second circle for middle-aged women in February this year,” says Nnaumrata.

“I looked forward to the new ‘topics’ that would be unravelled each week,” adds Malhotra. “It was a welcome break from the mundanity of routine, as well as a refreshing set-up for some new experiences that found their way into our lives.”

Variety adds spice
Nnaumrata is a certified professional coach and has been instrumental in ensuring that the circles had a breadth of varied topics while also having depth in meaning, brought about by way of carefully crafted activities and dialogues. She says, “We got introduced to people from various walks of life, who provided us with their insights and learning experiences, interspersed with fun activities. We have had all kinds of sessions: from meeting eminent personalities to dance movement therapy and from playback theatre to talks on veganism, yoga, and meditation. We even had a session on writing a will. Sometimes, we play games, and once a month, we get together for potlucks, sharing our home-cooked meals.”

Malhotra’s personal favourite remains the Buddhist Zen monk, who was hosted by Nnaumrata at her residence. “He shared some valuable insights on anger, peace, and meditation, the last two being qualities which we all possess but lose to the humdrum of life. We tend to react rather than respond with mindfulness while staying calm in the midst of all the triggers we experience in our lives,” she says.

So what distinguishes the Happy Ho Club from the often controversial ‘kitty’ group? “Our circle is the bringing together of women who meet with the intention of bettering their lives and re-establishing social connections. There is no idle chatter or gossip (though sometimes sharing experiences does lead us down the gossip route, but it is all in good humour and faith). Most of all, we feel safe being who we are, without judgement, shame, or inhibition,” says Malhotra. “We share experiences, food, and some friendly banter. The club has gifted me some precious friends and well-deserved peace after the passing away of my husband.”

Me time
For Kripa Singh, who owns a Montessori Pre-School, the circles bring a welcome break from her school work, housework, and caring for her husband who has been suffering from ill health. It marks the time for her own self during the week. “It was through these circles that I started to think about the most important person in my life—my own self,” says Kripa.

Anjana Desai, one of the members of the group and a staunch vegan, brings new recipes of natural shakes whenever we meet. “She is our local Sanjeev Kapoor,” says Malhotra, highlighting that even oldies can adopt newer, fitter ways of life. Vijaya Shetty (and her daughter-in-law), who has adopted an organic lifestyle, agrees. “It is a good way of ageing because once you understand how health and happiness are connected, life is great from there on.”

“I had no friends,” says Mira Arya, a former gold medallist, who lost her husband recently to prolonged ill health. At 80, she continues to be our most active and upbeat member; she has recently started working on her autobiography. “It is not the cards you are dealt; it is how you play them,” she says. Spoken like a true Bridge enthusiast that she is. Miraji is our inspiration on how to make the best of what we have got. She celebrated her 80th birthday with balloons and a sumptuous dinner organised by her daughter for all of us.

Connecting hearts
The bottom line is that it is really not that difficult to be happy. All we need is to share from our hearts and to hold a space for others to allow them to share as well. By emptying our hearts and connecting with the hearts of others, we can experience deep healing and build lasting relationships.

“I did not think I could make friends at this age,” says Pamela. “However, participating in these sessions has not only helped me open up to new friendships but has also taught me to widen my horizons, regardless of my age. I want to know more about new things, as I realise my way may not necessarily be the best way. I started to learn the piano with my granddaughter recently, and on Kripa’s birthday, we went to a popular vegan eatery and had a blast! The highlight for ‘the three musketeers’ (as Kripa, Vijaya, and I are lovingly called now), was a trip we planned to Jaipur, my hometown, and we had the time of our lives! We sang and swayed on hammocks and went around town having chaat (Indian savouries). At this age, being able to do that with people whose company I value is a pure blessing.”

More and more women are experiencing miracles and finding their feet. Some are finding new friends and some, their long lost happiness. Happiness circles are now expanding in various cities.