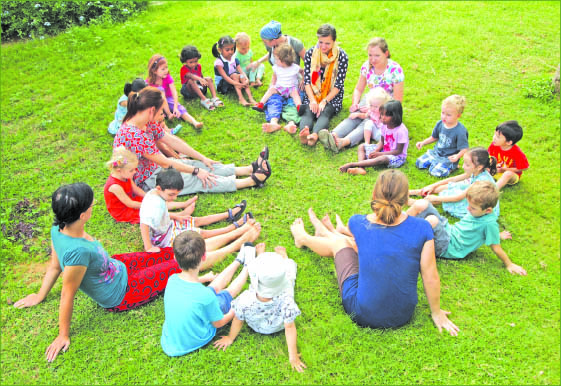 Nurturing vegan values
Citing the astounding example of a school in Chennai, Annesha Banerjee apprises us about the possibilities of a plant-based education and its plus points

The world is transforming at an alarming rate and people are now taking charge, with climate strikes and protests being organised around the world on large scales. Children and the youth form a big part of this revolution, raising their voices for authorities to take responsibility for their future. Imagine a scenario where the upcoming generation is self-aware and voluntarily takes actions to restore harmony in nature. And what better place could there be than a school, where children spend all their day learning the basics of life and the world, and to be holistically conscious?

India’s first ‘plant-based’ school in Chennai, German International Academy (GIA), has achieved this feat by taking steps to support sustainability. This holistic education institute became completely plant-powered in the academic year 2017–2018. Going 100 per cent vegan, the school was awarded the ‘compassionate school’ title by PETA India in 2017 for incorporating compassion, empathy, and healthy eating habits into their curriculum.

The warm ambience of GIA is evident as one walks through the gates: lush lawns with rabbits and chickens running around, ducks, goats and, in fact, a cow too are housed in the premises! Their journey started when the school began rescuing abandoned and injured animals from the surrounding areas. As time went by, the management and students found it difficult and uncomfortable to eat meat with all the rescued animals strolling outside, being petted and cared for. Thomas A. Pallushek, advisor for International Schools in the Asia Pacific region and founder of GIA, says, “We felt it was ethically not right. We wanted to reduce the human impact on the environment, and eating less meat is the simplest way.” According to Food and Agriculture Organisation (FAO) raising livestock for meat, eggs, and milk generates 14.5 per cent of global greenhouse gas emissions, the second-highest source of emissions and greater than all transportation combined.

The vision of GIA
One wonders why a school must become vegan. The idea is to become conscious of the impact our choices create on the environment. Our future depends on protecting the health and well-being of our children and the planet. Educating future generations and equipping them with skills to solve environmental problems can go a long way in changing the deteriorating climatic conditions of the world at large. GIA offers holistic education to all its students and focuses on developing all the dimensions of its students—ethical, moral, social, and personal intelligence. And to truly serve their mission of sustainability, shifting the campus lifestyle to veganism was the only logical solution that stood strong. The school states on their website: “Behind most of the joints of beef or chicken on our plates is a phenomenally wasteful land-and-energy-hungry system of farming that devastates forests, pollutes oceans, rivers, seas, and air, depends on oil and coal, and is significantly responsible for climate change.”

Acknowledged by PETA, milk consumption by children can lead to intestinal problems, obesity, chronic ear infections, asthma, and even diabetes, and scientists report that 33 per cent of Indians—including 70 per cent of southern Indians—are lactose-intolerant. In view of all these facts, the new menu of the school was decided upon, which reflected its commitment towards the environment. Each day, students are served with plant-based breakfast, lunch, and mid-afternoon snacks which are prepared in the pure vegan kitchen of GIA. The school has gone all the way to ensure an age-appropriate and well-balanced meal for its students and faculty while substituting for animal products. The wide-variety meal plan includes fresh fruits, vegetables, grains, legumes, nuts, and seeds. The health quotient of the food served is optimum with higher levels of antioxidants and lower levels of saturated fat and cholesterol. GIA is committed to serving fresh and seasonal local food to its students, which additionally serves the purpose of promoting fair trade among the children as a part of their curriculum.

Transition
Like any other process of change, this one too had its teething problems. Having served pork, meat, fish, and dairy products to the students on its premises, the transition had to be gradual and smooth. The process was systematic as the kitchen staff, in the middle of 2016, began reducing the amount of meat and dairy served to the kids. Later, any resources or food products that weren’t vegan were completely eliminated.

Parents were made a part of the academy’s transition to a vegan school. Said Mr Pallushek, “We called all the parents, asked them to taste 45 varieties of vegan food, and they liked it. We invited a homoeopathic doctor to enlighten the parents about the benefits of vegan food. Our students also like all the food that is being served to them.” Starting from educating the students and parents by screening documentary films to conducting debates, GIA went all out to introduce families to the nutritious, satisfactory, and delicious vegan cuisine.

While GIA ensures healthy growth for their students, it also emphasises the need for a proper substitution for animal products with alternatives that are high in proteins. They make their own mock meat, produce vegan cheese from cashews, and bake their own bread. The institute’s meal plan ensures that all the nutritional requirement of a child is met. Their wholesome substitutes include quinoa, lentils, seitan, beans (black, kidney, mung, pinto), hemp seeds, and much more. The daily display of their mouth-watering vegan meals include dishes with cucumber avocado toast, pesto pasta bake, zucchini bread, and applesauce, as well as ratatouille, flavoured rice with dal, pumpkin spice muffins, and fruit smoothies. Now who wouldn’t want to eat that!

Despite all the brownie points credited to the vegan curriculum of GIA, the school does not compel its students to become vegan. Children attending the school may be consuming meat at home, but while at school, they can devour an array of vegan dishes. Also, students have one day per week where they can bring food from home, given that it isn’t meat-based. “Our main aim is to provide one meal a day, without meat. Not all the students are vegan but, in school, they eat only vegan food. We experiment a lot, e.g., we bake our own bread and make seitan (a meat substitute made of wheat). We also make pizza and biryani using alternatives. Barbecue pasta burger, smashed chickpeas, avocado sandwich, soft shell taco, and garlic noodles are a few of the dishes on the menu decided by our chef,” says Sandhya Mohan, Admissions Manager at the school.

Impact of GIA
As established by hundreds of researches and medical cases, a plant-based upbringing is salubrious. Such diets provide children with all the vitamins and minerals they need. In fact, healthy eating habits from an early age prevent unwanted ailments and help maintain healthy body weight. With a plant-powered diet, all the sufficient energy and protein—packaged with other health-promoting nutrients such as fibre, antioxidant vitamins, minerals, and phytochemicals—are provided.

The purpose of the GIA isn’t just to offer a vegan environment but also to assist the children in learning ethical and sustainable eating habits. Throughout the year, the school, as a community, makes active efforts to endorse a low carbon footprint within its campus. Academically as well, their motto of sustainability is maintained by using recycled materials to supplement the students’ art projects and explorations. Besides, to make students aware of their responsibilities as citizens of this planet, children are authorised to lead projects that revolve around energy and water conservation, waste disposal, and biodiversity. Students also attend cooking classes (incorporated in the curriculum), learning to cook vegan dishes and enjoying the whole process.

Under the pedagogic system followed by GIA with a sophisticated project-oriented, bilingual, and inter-year-based teaching concept, implementing and practising a vegan lifestyle was much easier. The impact of this educational structure at GIA is positive and focuses on the all-round growth of a child, ensuring that each and every child is moulded into their own unique image, keeping in mind the essential pillars of everyday growth and learning. Creating a harmonious, caring, respectful, nurturing, and multicultural environment, the academy is committed to developing students into pupils who are resilient and adaptable, equipped with the knowledge, skills, and disposition to continue their education and become personally fulfilled, interdependent, and socially responsible adults.

Growing up in proximity to nature and its beings, children tend to harbour more compassion, tolerance, peace, love, humility, and fearlessness, which builds the personality foundation of these children. “This synergy with nature helps in the holistic development of children, especially the younger ones. It fosters a healthy curiosity and wonderment, along with a social and environmental responsibility that is rarely found in cement-laden study areas,” said Ms Kalpana, a faculty member. It is safe to say that GIA’s thinking is far beyond just being vegan.

We hope that more institutions take the initiative and follow in the footsteps of GIA to adopt a vegan environment to support the world in becoming a more ethical, environmental, and resourceful place.