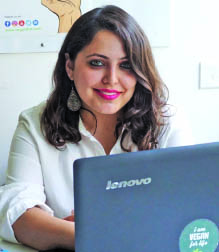 COMPASSION ON YOUR PLATE

A vegan for close to half a decade, Palak Mehta started Vegan First as a labour of love to give a voice to millions of animals and simplify life for the growing vegan community in India and across the world. She turned vegan when she found out about animal cruelty behind our food and lifestyle choices from her guru, Sri Mohanji. Mohanji’s teaching of ahimsa and veganism have deeply impacted her life and inspired her to create this platform.

Having worked as an artist, teacher and permaculturalist, Palak also represents the Indian chapter of the World Vegan Organisation, a global body of vegan-friendly leaders and industry experts and is responsible for virtually starting a campaign to promote Veganism in India, says Rishi Rathod.

Life is full of ironies. The Internet is full of information on every possible subject and yet, when Palak wanted to get some guidance, she could not find anything she could rely on. In 2016, she embraced Will Smith’s quote. Guided by her own light, she started a portal that would give information, advice, and most importantly, inspiration to become vegan, so that there would be one person less contributing to animal cruelty.

After consistent and committed efforts for the past four years, the tide has turned her way. Now she gets emails, letters, and messages daily for suggestions and guidance as to how one can become vegan. She has transformed from a one-person team to an army of 10 creative minds. But there was a time, she was laughed at and even questioned if what she was doing would ever work in India. Palak knew deeply that this was the need of the hour. In her own words, “Because if we don’t make conscious choices now, soon, we won’t have a planet to make choices on. But this took an intense amount of work; several sacrifices had to be made. I had been working through weekends for many months at a stretch. There was zero room for any breaks initially.”

Portal for veganism
Palak started Vegan First, India’s first digital and print publication and portal for all things cruelty-free, vegan, and sustainable, that brought all curious, passive, and active Indian vegan lovers together, where they can share their stories, ideas, products, trends, recipes, and recommendations for new vegan converts.

“Why is there such a lack of enthusiasm about veganism when most Indians are vegetarian anyway?” I asked her.

Palak was quick to answer: “A lot of Indian’s don’t eat beef, but we are one of the largest exporters of beef and leather, and this is a direct outcome of the dairy industry. We don’t realise in our everyday living, how much we are harming our animals. The milk we drink is stolen from the calf. We discriminate between animals; we see dogs as pets but chickens as food. They both have the same soul and pain is felt the same way by all species. We lie to ourselves. We tell ourselves that the pashmina shawls and cashmere we wear come from the extra wool the sheep produce, whereas, in reality, these sheep are bred just for their wool. Natural sheep don’t need any help. They grow just enough wool to protect themselves from the cold in the winter and to keep cool in the summer. When it is time, they shed their winter coat all by themselves. Most of the time, the shearing process is painful and without anaesthesia.

Palak told me that several readers have been following Vegan First for some time and have now switched to a vegan diet and message her with testimonials and thank you notes regularly. Not only that; after her Vegan India Conference, they were thrilled that people who were convinced about starting vegan mock meat companies or restaurants in their cities contacted them. These are the stories she is creating every now and then across India.

Health benefits
Madhavi Barot from Mumbai says, “I was suffering from a lot of aches and pains, even irritable bowel syndrome, and also had a terrible cold shoulder. In fact, my shoulder was so bad that I couldn’t even move it to brush my hair. Apart from that, I was going through menopause and was suffering from terrible mood swings. I went to see many doctors for these different issues, but no one could give me an effective treatment. Within a week of turning vegan, I saw that all my aches and pains had disappeared. Getting up in the mornings used to be really hard, with all these issues, but after switching to veganism, I could immediately tell the difference. I always thought all these diets were like a fad and that the old tried-and-tested food we normally eat was best for us, but not anymore.”

Both of Madhavi’s cooks were so moved by her compassion for animals that they have turned completely vegan now.

Another very inspiring story of transformation was that of Srinivas Kantheti. He says, “I am 55 years old and have been working for many years in high-pressure, top-management corporate jobs. Over the last few years, I have been sensing a loss of energy. I suffer from hypertension and my knee problems make walking and any form of exercise extremely painful. In fact, I used to wear braces for walking. I was even diagnosed as a diabetic. That, for me, was a major alarm bell. Many of my family members have suffered ill health due to diabetes. By that time, I was weighing 91kg and could feel the excess weight and drag on my energy levels.

“My wife’s friend introduced us to the concept of veganism. Even for a vegetarian person like my wife, giving up milk seemed to be extreme and unnecessary. We kept monitoring our health parameters, and, as days went by, we could see blood pressures dropping, sugar levels going down, shedding of weight, an increase in energy, and a sense of mental calmness. Very effortlessly, we dropped all those dietary habits which were acquired and not natural.

“Now, a month after the programme got over, I weigh 77kg. I don’t miss tea, coffee, cheese, dahi (curd), and non-veg food. My diabetes has reversed, my four BP medicines have dropped to one, and I walk 6 to 7 km a day without knee braces. I sleep well and have not had any sick days yet!

“I started a whole-food, plant-based diet for self-preservation, and as time passes, I am getting more and more convinced that animals were not created for consumption by humans. They have a place in our world but not as food. This, for me, is as much a spiritual journey as a mental and a physical one.”

The best part about Palak’s movement is that multiple things are going on concurrently, such as tasting for new vegan products, offerings by the latest hotels and restaurants on vegan food, cooking lessons on plant-based menus, multi-city community meet-ups along with product launches, etc.  Their portal is also up-to-date with every bit of news related to veganism such as a celebrity turning vegan, any food company launching vegan products, book launches related to the subject, or any new cruelty-free fashion label launch. But the top priority remains awareness about consuming cruelty-free products and hand-holding people into vegan, and plant-based foods.

Palak says, “Our platform gives a voice to millions of animals and aims to make life simpler for vegans in India and across the globe. We show you why to care and how to do it smartly. We cater to one and all but the solutions are always personalised.”

Influencing millions
Looking at the support she was lending to people across and beyond India, many started becoming vegan with her, and the number just kept growing. Vegan First now has an active online community of 1 Lakh plus vegans and vegan-curious Indians, and receives two million plus impressions quarterly. Consequently, vegan cruelty-free brands started approaching her to display their products, and restaurants have started to get their listing on her Vegan First portal for promotions. Recently, Fabindia launched their vegan menu, FabCafe, in Gurugram. They partnered with Vegan First to curate an exclusive luncheon menu. It was fully sold out, 20 days prior to the event. Now, Vegan First is assisting not only individuals but also institutions and businesses.

“Our vision is to create awareness about a healthy, sustainable, and vegan lifestyle in India. We provide sustainable solutions with content that is engaging, informative, and easy to digest. This includes myth-busting videos, recipes, substitutes, recipe videos, interviews, tutorials, guides, listicles, features, user-generated content, solutions from doctors and vegan experts, and more,” says Palak.

Time to turn the tide
The demand by conscious consumers is on the rise globally, but there is little information about it. Vegan First fills this market gap. Last year, Vegan First had created and launched India’s first International Vegan Conference, where 450 delegates attended the event from 18 countries. Master chefs were showcasing the new trends, recipes, and development in plant-based movements. It was a huge success, and it will be held again in Mumbai in September 2020.

The alarm bell has been ringing frantically for a long time now. The visitation by the coronavirus is yet another reminder to us from Mother Nature. We are being given a choice between karuna (compassion) and corona. Better late than never!