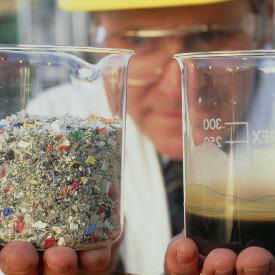 Plastic fuel is the future

India generates nearly 15,000 tonnes of plastic every day. Out of this, only a small amount goes back to recycling units while the remaining larger chunk finds its way into landfills, streams, rivers, and oceans, and stays there for aeons. Thankfully, to combat this menace, Dehradun-based Indian Institute of Petroleum (IIP), a constituent laboratory of the Council of Scientific and Industrial Research, came up with a technology in 2014 to turn plastic into fuel. Yes, you read that right!

This process is known as pyrolysis of plastic and is already being successfully put to use as a business model in countries like Japan, Germany, and the USA. Pyrolysis of plastic involves subjecting it to a high temperature of 400 to 450 degrees Celsius in the absence of oxygen (otherwise the plastic will start burning). During pyrolysis, plastic breaks down into smaller molecules of oil, pyrolysis gas, and carbon black. Like plastic, the pyrolysis end products are also hydrocarbons. Moreover, the fuel thus obtained is completely environmentally friendly due to the absence of any toxic substances. According to IIP, a vehicle using this fuel would be able to run for at least two km more per litre. Efforts have been commenced by a few public-sector players as well as individuals to run this model successfully. The Art of Living International Centre in Bangalore installed a pyrolysis plant in the year 2015, which has a capacity of reducing 200 kg of plastic into fuel, gas, and carbon. 20 per cent of the fuel that is generated gets used in running the plant, and the rest of it goes in powering the boilers of the Centre’s kitchen. The carbon black is used in making tar for the construction of roads. The gas is reused in running the plant.

Pune-based Medha Tadpatrikar started her own plastic pyrolysis plant, Rudra Environmental Solutions India Ltd, in 2010, following a tryst with mismanaged plastic waste. A ton of plastic can produce 600 to 650 litres of fuel. The organisation collects plastic waste from nearly 15,000 households. In Goa, too, a public-private partnership model is being instrumental in converting plastic waste to fuel since 2016.