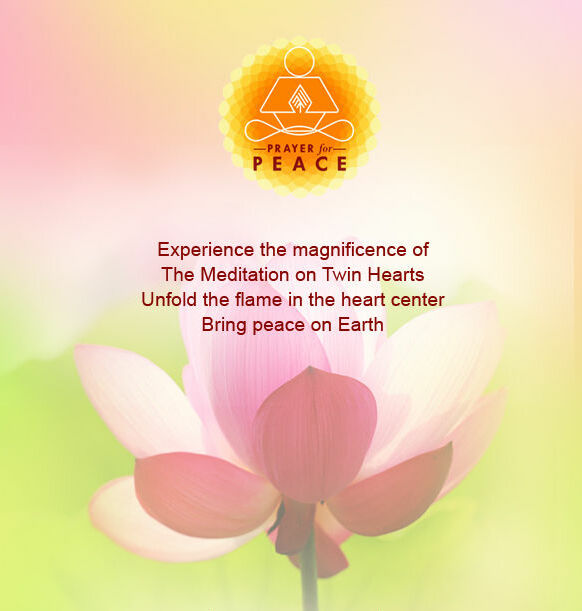 October 2016
There have been several great human beings, throughout the history of mankind, who have achieved success in their individual capacity in various walks of life. However, the time has now come for large groups to work in unison and achieve great success. As the planet evolves and moves into a higher energetic vibration, human beings are also set to evolve. The challenge for each one of us is to be able to harness this energy and use it productively. And what could be a better way than to learn to work in harmony and co-operation with each other?

‘Prayer for Peace’ is an initiative created to do just that. Organized by the MCKS Yoga Vidya Pranic Healing Trust, it aims to bring people from all walks of life to meditate together and bless the earth and its inhabitants. As its founder Grand Master Choa Kok Sui said, “The Meditation on Twin Hearts, when practiced by a large number of people, can miraculously heal the entire earth, thereby making the planet more harmonious and peaceful.”

“Also, it is seen that when the collective consciousness of mankind is impregnated with thoughts of certain concepts – in this case, oneness and cooperation – the entire population unconsciously gains the same knowledge. This can stimulate an automatic change in the consciousness of individuals all over the world regardless of their emotional and mental state,” says Dolly Narang, one of the core members of the organizing team.

Seemingly, as we evolve, group consciousness and collective work will be the order of the day, for as people work together, the concept of oneness gets strengthened in them. The evolution of the soul is hastened as the group consciousness is able to radiate enough positive change energetically to awaken even the large proportion of ‘sleeping humanity’. Keeping this in mind, the next ‘Prayer for Peace’ event is going to be held on November 12th, 2016 at the Thyagaraj Stadium, New Delhi. All are welcome to this free event.