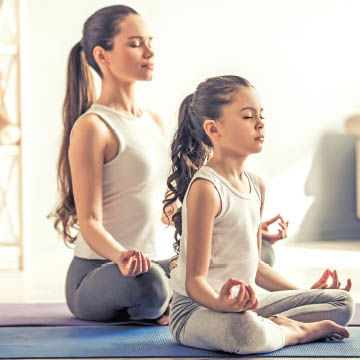 Queen Madalasa’s song in the Markandeya Purana is a perfect example of a mother coaxing her child to a state of reflective meditation. This exchange between a wailing infant and his mother, Madalasa, inspired the child to a lifetime of spiritual seeking and finding, that continues to light the path of seekers across millennia. A child cries because it has been forced out of the safety of the womb where it felt one, physically as well as psychologically, with the mother. This sense of separation, interpreted spiritually, points to the cause of all sorrow—the sense of separation from the divine womb. We cry for various reasons, but the great reason underlying several apparent ones is the same—the sense of being alone in a hostile world. Mother Madalasa does not try to divert her child’s attention with toys. Instead, she pours truth into his tender and extremely receptive ears through her lullaby. Neither Madalasa nor her children are personages of the past.

Meditation for the young
Their story is re-enacted and re-lived to this day, as parents introduce their children to their own deeper selves by gifting them the mirror of meditation, either by pointing the road or by reminding them of the Great One who awaits in the land where there are no seekers, no seeking, and no sought.

The road, of course, is meditation in its myriad forms.

“I have seen a complete change of person in my child Vivaan, aged 14 1/2 years. Before attending meditation classes, he was confused and was hanging around in the wrong company where he might have experimented with smoking, and drinking, which happens with many kids of his vulnerable age,” says Deepak Sharma, father of Vivaan. He adds, “After six months of meditation classes, his focus has improved, his behaviour with us has changed for the better, and he has attained clarity.”

Vivaan says, “I am doing meditation for one year now. I am still a mischievous boy, but I feel I am very much focused in doing whatever I do, including my studies. The biggest advantage is that I feel connected to my favourite, Krishna.”

Not as tough as it seems
But it is easier said than done. How many parents have failed to inspire their children in doing so? Is there any way we can help our children get into the habit of sitting quietly for a few minutes or doing meditation?

There are so many big and small groups or institutions engaged in creating this environment successfully and helping children and, in turn, parents. I guess we all want our children to have enhanced focus, compassion, self-esteem and confidence, and want to see them happy.

Almost all parents (including me) have issues with kids who are glued to a laptop screen, TV screen, or mobile phone. They just don’t know how to explain to their kids or make them sit and listen to them for a few minutes. It’s tough.

I found out from Jaina Desai, director and teacher at Art of Living, who is helping people, including children, do meditation for the past two decades. She says that contrary to what we think, it is easier with children than with adults. In her own words, “When we were in our mother’s womb, we were literally in a state of meditation for nine months. This state of rest and peace is within us and we find that children take to meditation, yoga and pranayama (yogic breathing) like fish to water.”

She has been seeing some of the most amazing results of meditation on children. She says, “Meditation and pranayama help settle the aggression, hyperactivity, attention deficit syndrome, and lack of concentration in a child.”

“Not only that; they help increase their attention span, have made them more intuitive, improved their confidence, and enabled them to excel in sports and academics,” she adds.

How does she and her team manage to get the kids do this?

“I believe in ‘sahaj samadhi dhyana,” she says. “So, it’s very simple. Children are engaged in ART Excel (All Round Training in Excellence) and Medha Yoga (Intuition Process) by a playful, fun activity and are slowly led into the desired meditation.”

Emotional strength
For children, at this tender age, are vulnerable to their environment. It’s the time when they start gauging their self-worth, get affected by peer pressure, and want to be accepted by others, particularly, the opposite sex. As they tend to react emotionally to what is going on around them, the development of emotional balance is the need of the hour.

Swami Swatmanandji from Chinmaya Mission, Mumbai, says, “Over the years, we have observed that children practising meditation regularly have much more emotional strength than those who don’t. Their bonding with parents become stronger. And the best part is that now the students request us to do meditation with their parents.” He says that some impacts are overnight, but real change comes about if meditation becomes part of their lives.

Swatmanandji discussed an interesting case with me. “The parents of a girl by the name of Ananya (name changed to protect her identity), were going through a separation, but she continued to come to us. She never told this to anyone except one friend, who informed us. It was an emotionally daunting time for such a young girl, but she held through this because she was doing meditation. In fact, many students, who are regular, told us that gods and goddesses like Krishna, Rama, Hanuman, Maa Laxmi, or Maa Saraswati are their friends; they feel strongly connected to them.”

I was curious to know how Swamiji manages to do this. He explained that, generally, he starts with the story of a particular deity or god, and then the conversation ensues. They continue to go deeper into the talks, and in the middle of it, they are asked to meditate on the deity. By this time, they already know about the deity, their focus is in place, and they become completely quiet. They are never forced to focus on any particular figure but are gradually led to meditate on form or the formless, or on a mantra—whichever helps the child to sit quietly.

Confidence and concentration
Confidence and self-esteem can be a very critical aspect of a child’s development. Mostly, it depends upon the parenting style, our critical evaluation of everything they do, and other reasons too. According to psychoanalysis, there are many do’s and don’ts to build self-esteem and confidence in children, but Manish Pacher—who is a teacher on value education in Gopal’s Garden School in Mira Road, Mumbai, and who has been involved  for the past 20 years in helping children learn meditation across Maharashtra—has a one-point solution. Manish said, “There is a direct connection between the regular practice of meditation and confidence and focus in children.”

He narrated an incident from one of his training programmes in Kolhapur in 2017. It was an activities-cum-meditation retreat for children from the 6th, 7th and 8th standard classes. Many students participated in lathi-kathi combat (traditional combat art) practice, which is practised with a wooden stick, but a few did not participate for various reasons. Manish said, “I know about a child named Chaitanya, who never participated due to chronic asthma. Not only did he never participate in this but he never took part in any other sport. Chaitanya surprised us all by doing lathi-kathi on the last day and that too for 40 minutes. His parents were spellbound and became emotional looking at the sight of their child performing lathi-kathi. They told me that you have done the impossible. I reminded them that it is not me but the focus and power you get from meditation that has done this. Please continue to help your child do meditation every day.”

“What is the feedback of the parents after these programmes?” I asked. “Children from cities are much less focussed due to their exposure to distractions, whereas children from rural areas are less distracted. The latter get into meditation faster and the results we see with them are quicker than with the city kids,” says Manish.

It’s not that the benefits we see are only the experience of teachers and parents, but there are sufficient scientifically proven benefits too. A few of them are clearly stated on a Transcendental Meditation site, which says meditation enhances energy, boosts brain function and creativity, reduces anxiety and depression, and builds greater resilience to stress.

Clarity and discipline
We are moving towards becoming an increasingly consumerist society. From cars to cornflakes, and mobiles to movies, we are bombarded incessantly with information on these things, wherever we go. Unfortunately, this puts our lives on autopilot and also affects our children adversely. They get programmed to become robots, and this is a matter of grave concern. “What do you suggest to break this behaviour?” I asked Divyaprabha Didi from the Brahma Kumaris, in Borivali, Mumbai. Didi says, “Meditation is the fastest way to help our children. We have been doing this for quite a number of years, and I must tell you there are amazing results to share.”

She says, “The single most astonishing benefit I have seen is clarity.  It amazes me how, in a few months, they start becoming clear about what is good for them and what is not. They become clearer about what is the right thing to do and what is not. The second benefit I can list is discipline. Parents strive really hard to discipline their children, but I have seen that children who are regular at meditation, gradually fall in place. They become disciplined without any external force.”

I was pleasantly impressed with what Divyaprabha Didi was saying. I asked, “How do you manage to get them to meditate?” She replied, “We sit in a group, give a thought to discuss, and invite them for a mini chat on the same topic. Post this, they are asked to close their eyes, and from there, we guide them to go deeper.”

Finally, to put things in perspective, another teacher from Art of Living, Sejal Thakkar, says, “Meditation is as natural to children as playing with toys. They are born yogis.”

Sharing her observation of children who did meditation, she says, “The screen and gadget time gets reduced and because of this, new talents manifest. There are certain undiscovered talents that come up in the child. They start to respect their objects, friends, and family, and progress from taking things lightly to showing responsibility and sensitivity towards their environment and people. They enjoy all kinds of food and become open to all kinds of tastes. They come out of their negative habits like smoking, drinking, and drugs.”

In conclusion, we would do well to remind ourselves of our responsibilities as first teachers to our children. We have to, in the words of Gandhi, be the change we wish to see in the world. Then, and only then, can we expect our children to choose approaches that are holistic, compassionate, and meditative in nature.