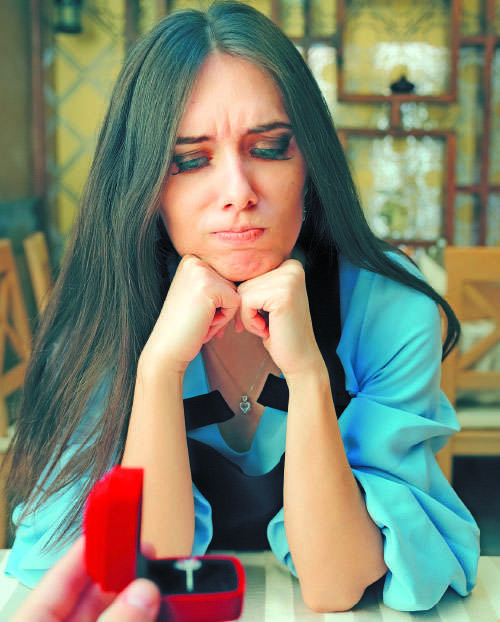 Commitment phobia cripples a prospective relationship from finding its zenith and leaves many heartbroken. Punya Srivastava finds out why some people are commitment-phobic

A school friend of mine, Nivedita, has been with her fiancé, Tushar, for more than 10 years, and I have always been amazed by their togetherness. Yet, there was a time when all was not well in their paradise, and I had to witness Nivedita struggling to keep the relationship afloat after being denied a commitment from Tushar. Theirs has been a fairy-tale romance, charged with great friendship and unconditional support for each other. Tushar had been the rock of Gibraltar for her in the most trying time of her life when, following an unfortunate sparring at home, she was forced to find a house for herself while still a student.

After the initial years of sticking together through thick and thin, she wanted to make things formal, but he was still hesitant to take that step. This uncertain situation stretched for almost two years. Why? To attain financial success before making the commitment, Tushar had reasoned. But, by that time, he was already well placed in a renowned software firm and had started earning a handsome salary. Then, what was the root cause of his dilly-dallying? My poor friend had no idea!

What is commitment phobia
“People go on from one guru to another, from one master to another—not because they are great seekers but because they are incapable of decision. This is their way to avoid commitment. The same happens in other human relationships. They are trying to avoid any deep involvement because, with deep involvement, problems must be faced, and much pain has to be gone through. If you go too deep, you may not be able to come back easily. So, people learn how to play safe: just let surfaces meet—hit-and-run love affairs. Before you are caught, run.” Osho had said in one of his talks on Zen in 1977.

But what causes these fears? According to Meenu Mehrotra, a Gurgaon-based writer, certified archetypal consultant, tarot reader, and spiritual healer, there could be many reasons why people find it difficult to commit to a person or a relationship. “I feel it has a lot to do with an inherent fear of not being able to give yourself completely to something or someone. It is also about holding back your resources of time, energy, attention, care, or love because one is afraid to be vulnerable or to open up. Or it may also be because, perhaps, one knows that he or she can’t offer more to the partner in a relationship.”

What is its root
When a person is afraid of being vulnerable, they find ways to keep the relationship at a superficial level, and any indication of it taking a deeper, serious turn causes them great anxiety. The reasons for this inability can be innumerable. However, it has been seen that many people with commitment issues have experienced poor romantic relationships, either first-hand or through observing acrimonious relationships in the immediate family, especially of their parents.

Other common causes of commitment phobia, according to Dr John M Grohol, Psy. D., who blogs on www.psychcentral.com, are:
•Fear of, or having had the relationship end without notice or signs
•Fear of not being in the ‘right’ relationship
•Fear of, or having been in, an unhealthy relationship (characterised by abandonment, infidelity, and abuse)
•Trust issues because of past hurts caused by those close to the person
•Childhood trauma or abuse
•Unmet childhood needs or attachment issues
•Complicated family dynamics while growing up

Citing her own example, writer, editor, and languages expert Purnima Pandey says, “Women like me are afraid of relationships because they have been badly hurt by dominating men in their lives. Growing up thus, in an absolutely controlled environment, I didn’t want to subject myself to a similar pattern after becoming an independent adult. The reason behind this thinking is the acute fear of having my movements monitored, my lifestyle compromised with, and my decisions questioned; in short, suffering the loss of freedom even after becoming an adult. I believe this to be the reason I grew up as a commitment-phobic person. The thought of getting involved with someone fills me with dread. Being commitment-phobic doesn’t mean that I despise or hate men, or that I have never harboured any romantic feelings for anyone. But the thought of spending my life with a man or being with him forever frightens me; the mere thought of having a ‘forever’ chokes me with claustrophobia, and I sternly put a stop to the feelings developing within.”

Disturbed family situation
A lot of commitment-phobic people tend to grow up in volatile families or in families in which the parents are in a loveless and silent relationship. In either scenario, there is a palpable feeling of tension, unhappiness, and dissatisfaction from which each member wants to run away. In the case of the loud and volatile family, there is a lot of insecurity about what will be happening next or in what mood either of the parents will be at any given time. These people, unconsciously, were brought up to constantly have one foot out of the door.
“Can you imagine a child being completely invested in a mother or father whom they cannot trust? The child feels a constant state of emotional panic. This volatile, unstable home creates a neural pathway belief system to be commitment-phobic,” says relationship expert, holistic psychotherapist, and one of the founders of Positive People Army, Victoria Lorient Faibish. Such people tend to have thoughts like “Why am I going to commit
when it’s only been unsafe to commit to people that I am supposed to trust and relax with?” Those who grew up in a silent, loveless, and inexpressive home had no role model for healthy, committed, adult relationships or bonds.

What adds to the narrative is the way popular media portrays commitment issues being a ‘no-big-deal’ in a culture that validates promiscuity. It is one thing to look for your soulmate in a world inhabited by seven billion people, but to find them and yet be unable to hold on to a relationship is quite another.

“We see all kinds of jokes and memes that equate relationships and marriages to a prison, being circulated with impunity on social media every day. To listen to conversations that revolve around marriage and family, in which wives and husbands are nothing short of trouble for each other, scares off the youth. These discourses have changed the way we see ‘being together’ or ‘being committed’ today,” says Anjali Srivastava, a Mumbai-based development sector professional with specialisation in mental health.

Thus, people are only comfortable in a relationship till the time things are light and fluffy. The moment the relationship starts getting intense, the red flags within their minds pop up and they start fidgeting. They are encountered with the prospect of having to make a decision to be present in that relationship as intensely as the other person is. Their partner’s intense feelings towards their relationship begin to scare them, and instead of gathering up courage to follow through, they start backing away.

Such people are afraid of being hurt because, with time and due to their past circumstances, they haven’t learnt to nurture themselves, nor (consequently) their relationship. The imprints of past hurt are still fresh in their minds, and every time a small incident happens, that may or may not imply betrayal, their mind reinforces those imprints much deeper. This becomes a cycle, and they start attracting people in their lives who further cement these beliefs through their behaviour. This cycle goes on until the person consciously decides to pause the auto-pilot mode and look within.

How to deal with it
“The passion and beauty which comes with ‘commitment’ is never part of any discourse on this topic among friends and family. A lot can change with a small change in the terminology and discussions we have about relations and the good in them,” says Anjali.

Commitment is about being true to yourself first. A person who is inauthentic with
themself, finds it extremely challenging to be committed to anything outside of them. Moreover, when in a relationship, one’s partner becomes a mirror. One can see one’s ugliness in the other; the other provokes one’s unconscious and brings it to the surface. It horrifies the person, and even if they are in a relationship like marriage, they might not be committed completely to it; they might withhold their time, energy, effort, and/or affection.

“Maturity comes only when you are ready to face the pain of your being and to take the challenge. And there is no greater challenge than love. You will have to know all hidden parts of your being and the easiest way is to be mirrored, reflected, in a relationship,” Osho had said.
Fears, just like any other shadow side of ours, need to be confronted and dealt with rather than hiding them behind addictions, anger, or escape, and one must heal them. “For someone who has a commitment phobia, I feel their lesson is one of courage and faith. Talking about your fears to a therapist or opening up to someone who makes you feel safe can help you start the healing process. The idea is to enhance your self-esteem and build your soul stamina, so the fear is not able to paralyse you. It’s all about beating your saboteur and not letting it sabotage your empowerment. At the core level, dealing with any phobia is a journey of self-empowerment. Yoga, breathing exercises, and journaling are powerful tools, and so is meditation. Even a simple commitment to exercise daily can help us deal with this phobia in an empowering way,” says Meenu Mehrotra.

Nivedita recounts her relationship journey. After months of talking to a wall, she decided to end the relationship. There was radio silence from both the sides for many weeks. One day, he contacted her, and they both decided to have a conversation like mature adults. “Waiting to achieve financial success can never be a reason for someone to delay a commitment in a relationship. I had told him that much. He reflected on it and gradually realised that the real reason he was fearing commitment was something else. He had already shared with me that as a child, he had witnessed his father abandon his mother, and she had to raise him and his brother alone,” she offered by way of explanation.

Tushar’s mother had drilled into his head that one only needs to make a commitment to financial security and nothing else; that people betray, and only money supports you. Having grown up hearing these statements, Tushar, unconsciously, was projecting these beliefs on his relationship with Nivedita. Once he realised this, he only had to accept that his fear was based on a mere belief which was not true in his case. They both had been through several ups and downs together and had proven to be each other’s support system. A year and a half later, he proposed to her in front of the Eiffel Tower with a ring, and once again, everything was well in their paradise.