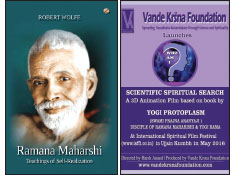 DIALOGUE WITH THE GURU

Ramana Maharshi was a guru to several followers. His teachings led many on the path of enlightenment and still continue to radiate the light of peace and Self-awareness  on spiritual seekers. The most accurate way to describe him as a master would be to quote an encounter that Robert Wolfe mentions in this book:

It is recorded that someone came to Ramana Maharshi and said, “I understand that you can give enlightenment.”

To which Ramana replied: “Yes, I can give it. Can you take it?”

This simple reply is the essence of his profound teachings that Robert Wolfe has captured in a very precise manner in this book.

Ramana Maharshi: Teachings of Self-Realization is a compact yet powerful book of lessons on Self-realisation. Wolfe has, in a very concise manner, chronologically compiled what one would want to ask the guru about non-duality and the Absolute state of Oneness in thirteen questions, followed by his own pronouncements addressing Ramana’s teachings and his own spiritual concerns. In the 99 pages of the book, Wolfe lays open the knowledge imparted by the guru for seekers to step closer to the ultimate truth of Self-realisation. Although one may find this book too heavy in its insights about the jnana of Ramana Maharshi, readers are sure to comprehensively understand that enlightenment is attainable if only one is ready to receive it.

Ramana’s preaching of the ‘Self’ as the supreme being is repeated throughout the book. It is true that people seek the Absolute, subsequently making it an external entity. But according to the teachings of Ramana, duality will persist as long as there is a ‘self’ which is in search of the Absolute. Wolfe states, in various places within the book, that the ‘self’ is a part of the ‘Self’; ergo, it is not apart from the ‘self,’ but, at the same time, is more than that.

Wolfe also mentions that the lessons of Ramana Maharshi are well documented unlike that of Buddha’s, which have been corrupted through various platforms. So, one can vouch for his teachings of not being just hearsay. This book serves its purpose of setting a solid ground in the precepts of nondual awareness and their implications. In addition, the select couplets of Ramana Maharshi at the end of the book start making much more sense to its readers, having now understood what it truly means to be ‘Self-realised.’

Vedanta through modern science
Film: Who am I?:
A Scientific Spiritual Search

Om, they say, is where the heart is. For Swami Prajna Aranya’s heart is given to the lifelong mission of conveying the profound truths of Vedanta as expounded by Bhagavan Sri Ramana Maharshi and Swami Rama in the language of modern science.

The film is based on the book Who am I?: A Scientific Spiritual Search authored by Swami Prajna Aranya, who is better known as Guru Yogi Protoplasm. To take Swamiji’s mission forward, Vande Krshna Foundation was created by Satchitananda Vandana Khaitan, who has produced the film. The animation film reveals to modern seekers how science and spirituality are connected. The film uses galaxies, stars, skeletons, the circulatory system, and the electromagnetic spectrum to drive its point home.

It lucidly explains, with the help of stories and anecdotes, how we are searching for happiness and true bliss in the wrong places, such as wine, sex and wealth. It also explains how maya shakti casts a spell of illusion that does not let us see beyond  the form. He reveals how going within helps to discover who we are. Awakening discrimination, which allows us to sift the real from the unreal, is the way to detach ourselves from the illusion of ‘me’ and ‘mine,’ which is at the root of most of our pains and problems.

The film encourages seekers to develop vairagya (detachment) by chanting mantras and through meditation, which opens the doorways of resting in bliss, which is our true nature. It is wonderful to see how principles of quantum physics are used to show we are finally indestructible energy. The film motivates us to undertake the ancient meditation process called Pranava Nada Anusandhan, which involves contemplation of the six stages of chanting OM.

Though the film has done a great job in putting across the difficult spiritual concepts for the common man, it fails to hold your attention for 70 minutes due to a monotonous voice-over. The motion graphic could have been much better and the CG (computer animation) of the skeleton lady is unintentionally amusing. The animation, however, saves the show somewhat.

Seventy minutes is a bit too long for an educational video that is meant to popularise a subject that requires undivided attention. The video would work better if it was served in several smaller doses of five minutes each.

Watch it on Vande Krishna channel on You Tube