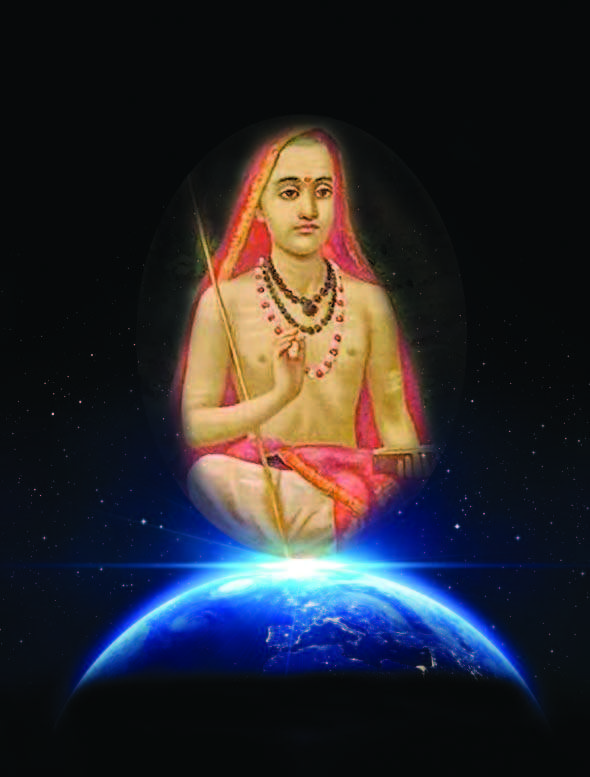 Science and Shankara
Fired by a book on Adi Shankaracharya, Rashme Sehgal expounds how the great seer’s Advaita philosophy can be viewed in the light of modern science

I have been a fan of Pavan K Varma’s works for a long time. He has combined a career in diplomacy with politics and writing, and has served as an ambassador to several countries, apart from having been a spokesperson for the Ministry of External Affairs as well as the director of the Nehru Centre in London. Following retirement from the MEA, he has served as advisor to the chief minister of Bihar and has also been an MP in the Rajya Sabha. Most significantly, he has authored several bestselling books including Ghalib: The Man, The Times; The Book of Krishna; The Great Indian Middle Class; Being Indian, Becoming Indian; and Chanakya’s New Manifesto to Resolve the Crisis Within India.

In his latest book, Adi Shankaracharya: Hinduism’s Greatest Thinker, he has written a detailed account of this great seer’s life and philosophy and how his findings are being endorsed by modern science. After a long talk with him about the contribution of Adi Shankaracharya to Indian spirituality, I felt compelled to write this piece.

To write an article on one of India’s greatest spiritual thinkers—Adi Shankaracharya—in these troubled times, is to end up either being panned by left-leaning liberals or inviting the wrath of the ultra-right brigade. But Shankara’s  understanding of the nature of the universe is receiving validation from modern science. It is amazing how the revelations of modern science in the diverse fields of quantum physics, cosmology, and neurology were anticipated by Adi Shankaracharya, who lived in the eighth century, as revealed in Varma’s book.

The eternal Brahman
The Advaita philosophy, as systematised and propounded by Shankara, is indeed capable of accommodating, to the greatest extent possible, what science is revealing today. He saw Brahman as comprising  infinite energy or urja, pure consciousness, and the embodiment of perfect knowledge. This Brahman is eternal and unchanging.

Cosmology, which maps the evolution of the universe, tells us that the universe is near infinite. This has been proven beyond doubt by several telescopes and satellites that are looking into the vast universe, whether they be the Hubble Space Telescope, the International Space Station, or the Cosmic Background Explorer satellite, all of which tell us that our earth is but a small planet orbiting the sun and is part of a much bigger galaxy called the Milky Way. The Milky Way is so vast that it would take 26,000 light years for the earth to reach its centre. Amazingly, there are at least 125 billion such galaxies in the known universe, and each galaxy has 200 billion stars, most of them larger than the sun.

This vast universe is not static; it is constantly expanding and that too at speeds approaching the velocity of light. Space itself is constantly expanding and carrying the galaxies with it. If the universe is infinite in scale, then Shankara’s concept of Brahman is also that of a being who is all-pervasive, beyond boundaries, and cosmic in scale.

Modern science points to evidence that the universe is around fourteen billion years old. This does not rule out that there could have been another universe before the Big Bang, that supposedly brought forth our current universe or that, following the Big Crunch, this universe could self-destruct in order for another universe to emerge. In other words, cosmology points to the fact that the creation and destruction of the universe is an eternal process. This corresponds to the concept of Brahman as being anant, something that always was and never will not be. Shankara’s formless infinity pulsating through the Brahmand (universe) is in perfect consonance with what cosmology is telling us today. Cosmology is also telling us that this vast universe is underpinned by an intelligence that is verifiable because this universe works in perfect harmony that can be calculated to the last second.

To cite an example of this cosmic precision, along with the Big Bang, a huge physical expansion of space occurred, but it happened with complete precision; otherwise, the emerging universe would have collapsed or expanded without any control. As Stephen Hawking said in his A Brief History of Time, “If the rate of expansion one second after the Big Bang had been smaller by even one part in a hundred thousand million million, it would have recollapsed before it reached its present size.” Hawking rightly notes that the universe does seem to have a set of laws in its functioning but that higher power—God as per Hawking or Brahman according to Shankara—has since left the universe to evolve according to them and does not now intervene in it.

The supreme intelligence
In other words, the scientists agree that the universe is governed by a supreme intelligence at work. What is the nature of this intelligence? Shankara’s answer, in consonance with the latest science, is that the purpose of the universe may be incomprehensible to the human mind, but this is all part of an intelligent design emanating from an inexhaustible source of energy (Brahman). Brahman is the source from which all things emanate and lapse into. It is the one constant, eternal, intelligence personified, unchanging and transcendent. Cosmology is saying exactly that today.

Mani Bhaumik, an American of Indian origin, who won fame for his work on lasers, and a member of the American Physical Society, has reiterated that the immanence and transcendence of a higher power bears a resemblance to the concept of Brahman, which the great rishis of the Vedic tradition have seen and experienced in their greatest mediations. Modern science tells us that the whole of the universe is flooded by a sea of energy—a clear light (the self-luminosity of Shankara) that fills what is known as the quantum vacuum.

Modern science also validates Shankara’s view of the empirical world. Albert Einstein’s theory of relativity shows that there is no fixed frame of reference to the universe. Einstein also made it clear that the world as we see it is not what actually exists. As scientists probed deeper into the mysteries of the nanoscopic world, they discovered an entire universe of sub-atomic particles consisting of protons, neutrons, quarks, gluons, and bosons—in fact, as many as 200 sub-particles.Going further, Danish scientist Niels Bohr pointed out that a particle has no absolute properties but is whatever it is measured to be. Many years later, in 1984, a ‘string theory’ was mooted, according to which there were no particles at all—only waves. What Bohr and scientists after him are saying is that objective reality does not exist.

The world around us is not confined, as we believe, to define physicality. On the contrary, it is just a flow of energy in a constant state of flux. As Hawking explains, the matter in the universe is made out of positive energy. The quantum world demolishes the notions of conventional reality, while simultaneously establishing that all phenomena are inherently and constantly in flux.

The interconnected world
But while scientists look outwards, Shankara’s journey was inwards. The outward reality, Shankara said, exists as maya. It exists at a certain level (sat) but is illusionary at another level (asat). Scientists have also proved, through a series of experiments, the interconnected nature of the world, which is in striking conformity with Shankara’s vision. As individuals, we may believe that we are autonomous, but just as there is no division between two separate laser beams, so also, there is no real division between space and time, and between selves. We are all individuals, but individuals within a greater unit, a unity that defines each of us in terms of others, and gives each of us a stake in eternity.

This essential individuality is now being proven, not only by the inter-relatedness of the macro cosmos but at the subatomic level too, where, as the EPR experiment shows, two electrons are correspondent with each other, even when spatially separated by huge distances.The essential question is that if Brahman is the only reality pervading the universe, why has He created this cosmic multiplicity? Shankara has no clear answer to this question. It is anirvachaniya; indefinable and inexpressible.

Modern science is saying the same. Einstein said, “The most incomprehensible fact about nature is that it is comprehensible.”

“Was it all lucky chance?’ asks Stephen Hawking, then goes a step further to question, “What is it that breathes fire into the equations and makes a universe for them to describe? The usual approach of science of constructing a mathematical model cannot answer the questions of why the universe goes to all the bother of existing. Is the unified theory so compelling that it brings about its own existence? Or does it need a creator, and, if so, does he have any other effect on the universe? And who created him?” He goes on to say, “The boundary condition of the universe is that it has no boundary. The universe would be completely self-contained, and not affected by anything outside itself. It would neither be created nor destroyed. It would just BE.”

Modern science is thus validating the basic Advaitic concept that, in conformity with the eternal nature of Brahman, the universe too is part of a successive cycle of manifestation and dissolution, and this process is eternal in nature.