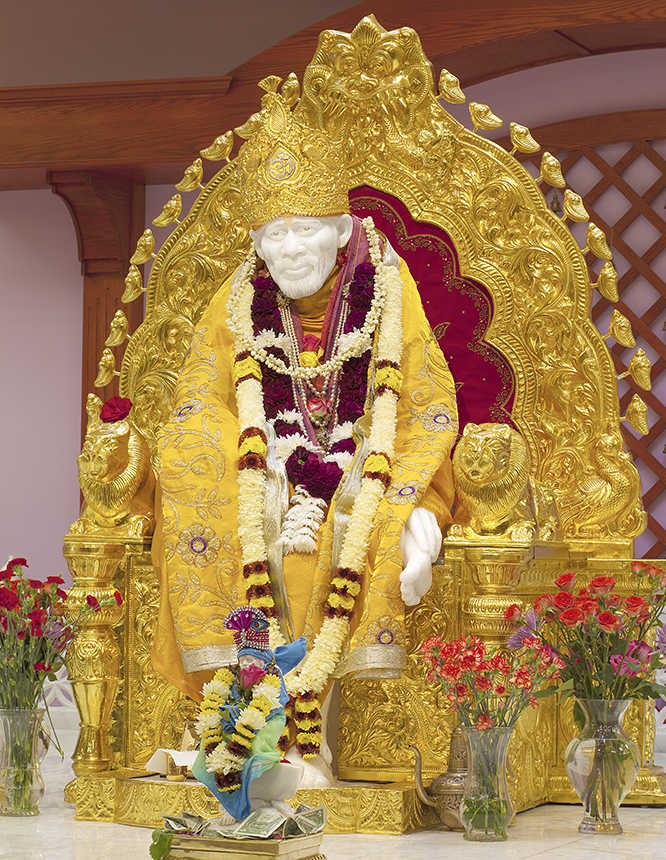 Shirdi. The abode of Sai Baba who is the light of God on this earth—helping, hearing, and loving everyone unconditionally. Shirdi. A land vibrating with the blessings of this saint.

Driven by my spiritual wanderlust, I—along with a kindred band of friends— embarked upon a journey to the holy abode of Baba, where he awaited us. Though long, our train journey was replete with vistas of the highlands, plateaus, and grasslands and a cornucopia of cross country cultures, flitting in and out at each railway station. I reached my destination full of happiness, contentment, and joy.

Shirdi exists on a plain of purity, with Baba’s vibrations still radiating bright and strong. They bind together his devotees with the threads of light, devotion, and peace. Shirdi is a plain area littered with sugarcane fields, a staple crop of the region. Sugarcane juice is an extremely popular drink in this land. Shirdi is also lined with a number of hotels and motels for every pocket. Many of them come with a touch of ayurveda.

For eight days, Shirdi was our home thanks to basic motels, a vegan coffee shop, and meals that were cooked with lots of love. We relished the simple food; the touch of love was evident in every morsel we ate.

I stepped into the tranquil precincts of the temple, enveloped by Baba’s love. The ambience was charged with the liveliness of the hymns being chanted in Baba’s praise. The devotees were bathed in Baba’s devotion. My soul, craving Baba’s presence, showed me the way around. The aura of Shirdi pulsated with peace and love. People came to Baba with their worries, issues, attachments, and problems, seeking fortitude for themselves. We breathed in the purity-scented air of Shirdi with tears of ecstasy in our eyes, in the hope of meeting the benevolent Baba.

The Shirdi temple complex comprises the main temple where Baba is enshrined, along with the Hanuman Temple, Chavadi, and Dwarkamai. The temple complex also bears the ancient neem tree whose leaves became sweet with Baba’s presence. An eternal fire, which he lit, burns at various spots in the complex, denoting his constant presence. The Hanuman temple enshrines the idol of Lord Hanuman where the air is punctuated intermittently by the holy chants in his praise. Chavadi is the place where Baba used to sleep; it was his place of residence. Dwarkamai is the old masjid where Baba had lit an eternal charcoal fire and the place where he would sit in meditation. He would also give udi (sacred ash), which was said to heal people of their diseases. Henceforth, it became the seat of pious and pure vibrations. Every Thursday night, a Sai Palki procession starts from Dwarkamai and goes around Chavadi, before culminating at Dwarkamai. It is a sight that thousands wish to lay their eyes upon. Shirdi is an experience in itself which I realised after having sat down for meditation at Dwarkamai.

Shani Shingnapur is believed to be Lord Shani’s abode. The town is quite renowned for its doorless houses. None of the residents ever put a lock on their houses as it is believed that Lord Shani himself guards the town. The deity resides in Shingnapur in the form of a black stone which was discovered by a shepherd. The man prodded the stone with a pointed rod and found that the stone actually bled. He was later visited by Lord Shani in his dream which sealed the deal. From that day till today, thousands of devotees from across the world flock the town to seek the Lord’s blessings to get rid of their sins and perform their penance.

My little visit to Shingnapur was to experience the fragrance of purity and devotion that pervades the entire region. Shirdi is surrounded by spiritual spots like Trimbakeshwar and Grishneshwar where Lord Shiva is said to have manifest himself in the forms of the great lingas which were worshipped by Lord Rama when he was in exile.

Moreover, the UNESCO world heritage sites of Ajanta and Ellora too stand next to Shirdi.

The 2000-year-old hand-chiselled cave monuments are the biggest tourist attractions in the state of Maharashtra. I was completely smitten by the ethereal ambience of these ancient Indian sites.

Being in Shirdi was an experience of a lifetime. The divine energy keeps you engulfed every moment of your stay in the pious abode of Baba. My trip was organised by the tour company Heritage Getaways which makes all my travel dreams come true.

Mode of transport: Overnight train to Kopargaon (Maharashtra) from Delhi. From Kopargaon, by taxi, which takes 30 minutes to reach Shirdi. Delhi to Pune by air in two and a half hours. Pune to Shirdi by road in five hours.

Best months to visit: All around the year.