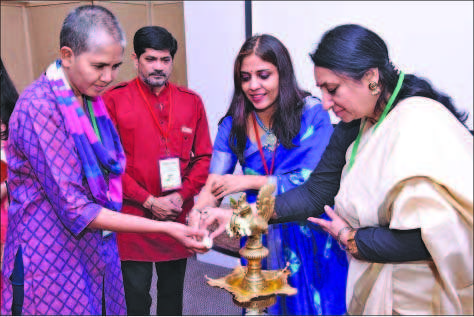 Every Life Positive International Festival is an important event for the whole LP team. Preparations start months in advance—work is delegated, strategies are made, people leave and join, challenges (like the Kerala floods) crop up; all this goes on for weeks together. And yet, each member of the team gives their best to the task at hand with the sole aim of creating a platform that offers spiritual wellness to the waiting audience

“Life Positive expos are unique and very much needed for our spiritual growth. The festival is an amazing opportunity to benefit from having a first-hand interaction with experts in various modalities. I experienced powerful meditations that provided healing and relaxation,” said Bangalore-based Sukanya Ramani, who participated in the fourth Life Positive International Festival 2018 held in Coimbatore on August 25 and 26. Like Ms Ramani, other participants too felt the therapeutic effect of the healing workshops organised for them. Unfortunately, Abhakumar Shah’s workshop on Mudra Science had to be cancelled due to a last-minute emergency. However, Dr Vijayalakshmi Panthaiyan more than made up for the cancelled programme with her intensely invigorating workshop on Sanjeevani healing on the second day of the festival that drew a large crowd.

The programme opened with editor Shivi Verma’s welcome address in which she highlighted Life Positive’s constant efforts to offer people a plethora of spiritual wellness tools. Mr DR Kaarthikeyan, President, Life Positive, delivered the closing address at the end of the two-day festival. He appreciated all those attending the festival to gain valuable techniques for body-mind-spirit wellness through cutting-edge facilitators hand-picked for them by team LP. A report:

Understanding karmic cycles through past life therapy by Dr Trupti Jayin
A workshop on past life regression naturally evokes a lot of intrigue in people. Add to it the most popular name in the field who was seen on the television, and you have got yourself a winning combo.

Dr Trupti Jayin dazzled in her workshop. She put to rest the one and only question that plagues the mind of anyone undergoing a regression: Was it for real or did I imagine it? “One can only imagine something which has its basis in one’s memory bank,” she said, adding, “Thought-energy is interpreted through imagination and that is how one usually gains access to one’s past lives.”

She then proceeded to demonstrate the now scientifically proven phenomena called ‘hyper-communication’ through an exercise. Participants were asked to form pairs of transmitters and receivers. The transmitters had to visualise or think about a memory while sitting across the receivers. The exercise revealed that most of the receivers were able to perceive the visuals relayed by their partners through imagination. Dr Jayin also explained how the scientific theory of ‘quantum entanglement’ talks about karma prevailing through time and space in the life of each person existing on the earth realm, thus confirming that science and spirituality are truly two sides of the same coin. The workshop was peppered with guided regression sessions: one on how to delete an embarrassing or limiting self-belief, another to heal a challenging relationship in one’s life, and the last one to heal a troublesome health issue. The last regression session was a revelation for me as I found the root cause of my rapidly
aggravating condition of cervical spondylosis in one of my past lives. I saw myself as a 25/26-year-old in the 13th century who was struck on the back of the neck by a blunt sword. What astounded me more was the realisation that the cervical spondylosis issue flared up in this lifetime just four years ago when I was 25!  Few weeks ago, I had suffered a debilitating bout of spondylosis pain for over two weeks which relapsed a day prior to my flight to Coimbatore. The condition prevailed for three back-to-back days and continued to disturb me on the first day of the festival. I had been sitting in the workshop with ever increasing stiffness and swelling in my neck and shoulders. But as soon as I came out of regression, I felt liberated from the shackles that had been weighing me down. The stiffness and swelling had vanished, leaving me feeling amazingly light and speechless! The pain seems to have
gone for good.

Being in Sampoorna’s workshop was like entering the room with a heavy sack tied on the back and dropping it fully before exiting it. Participants felt light and liberated at the end of it.

Said Sampoorna, “The common adage ‘Forgive and forget’ never works because memories of hurt do not die. ‘Forgive and remember’ is the new way because, having eliminated the negative feelings associated with a hurtful incident, it simply stays as a memory that does not arouse any feelings in your mind. In the end, only love remains in your heart.”

The best part of the workshop was that she did not ask any of the participants to reveal their personal issues. Instead, she led them through a series of cathartic exercises that helped in surfacing trapped emotions and setting them free. The first exercise involved touching an object and becoming one with it and then describing the object from its own point of view. As people did it, amazing revelations surfaced, and people saw things that were going unnoticed so far about their surroundings. Then she asked people to speak about their trigger points. Some said betrayal; others, laziness, procrastination, lying, impatience, and so on. Sampoorna explained that our trigger points were areas where we ourselves needed to work on instead of blaming others for having those shortcomings.

For example, if someone’s obstinacy was giving us trouble, we should check in which areas in our life were we being obstinate. “After you have zeroed in on that area, you need to address the energy of obstinacy and say, “I love you. I am sorry. Please forgive me. Thank you.” Explaining its meaning, she said that you say sorry to the pure energy of love which got changed and distorted into its current form, and then you thank it for showing up.”

When you repeat the process several times, your own disdain for the person exhibiting these qualities diminishes and they, as a result, undergo a positive change in themselves. She quoted several examples from her own life when she was faced with difficult people and relationships; instead of reacting to provocations, she practised the above-mentioned method and healed the issue fully from the root. After that, the participants were led through several exercises that involved venting loudly, pushing off an imaginary burden from their shoulders, saying ‘NO’ strongly and emphatically, pulling punches in the air, and so on.

Groups of three participants each were formed where people took turns to have positive statements, “you forgive, you are forgiven, you are free” whispered to them by the other two in the group. In the end, Sampoorna taught how to use gibberish to release trapped energy from the cells. After this last exercise, participants experienced an immense release and found that they could look at the old hurtful incident dispassionately. They no longer felt any anger or resentment against their wrongdoers.

Said Mr Narendra Kumar Ranka, “I have not felt the kind of happiness I felt today in a long time. Sampoornaji is a great teacher, and we have taken quantum leaps in evolution with her today.”

The second day of the festival was dedicated to Sanjeevani healing—a guided, healing meditation prepared by renowned mind power therapist, Dr Vijayalakshmi Panthaiyan. Clad in a traditional Kanchivaram beige and maroon silk saree and a string of rudraksha beads around her neck, small-framed Dr Panthaiyan radiated the gigantic aura of someone who knows her business thoroughly. Unlike any previous workshop she had conducted for Life Positive, her Sanjeevani healing workshop was replete with exercises pertaining to emotional and mental cleansing through pranayama, mantra chanting, mudra, and music therapy.

Dr Panthaiyan commenced the workshop with a guided alpha mind power meditation to elevate the collective energy of the hall. She followed it by elucidating upon the impact of various deep-seated emotions on one’s physical health. She then directed everyone to two different breathing exercises: rhythmic diaphragmatic breathing for mind relaxation and fast-paced chest breathing to keep the mind alert.

The workshop then moved on to Agnikundam meditation to remove all the blockages of the mind. Dr Panthaiyan instructed us to breathe with long inhalations and short, forceful exhalations to bring up the unresolved emotions and exhale them into an imaginary ritual fire. I could feel my exhalations getting heavy as if burdened by a load. The vigorous meditation left me feeling light-hearted.

Dr Panthaiyan then proceeded to teach surya pranayama, nadi shuddhi, and bhastrika. This vigorous session was then followed by panchabhoota pranayama in which the participants were told to balance the five elements (air, water, fire, earth, and ether) by holding five different hand mudras for at least three to five breath cycles each. “One can relax one’s agitated self simply by bringing the five elements within oneself in alignment,” she said. She then proceeded to mantra chanting with the mantras ‘Om’ and ‘Om Namah Shivaya’ repeated 108 times each. Apparently, the five syllables—na, mah, shi, va, and ya—in the latter mantra are said to balance the root, sacral, solar plexus, heart, and throat chakras.

The last session of the day was dedicated to giving Sanjeevani healing to others. Dr Panthaiyan divided the whole group into smaller groups of four, in which each person was told to invoke the Sanjeevani healing energy in the cosmos and become a channel to transfer it to the other person. By the end of the day, every face sported an energised glow and a big smile.

Said Usharaj Saundararaj, “I am deeply thankful to Life Positive for organising such meaningful programmes for its readers. Waiting to come back again next year.”