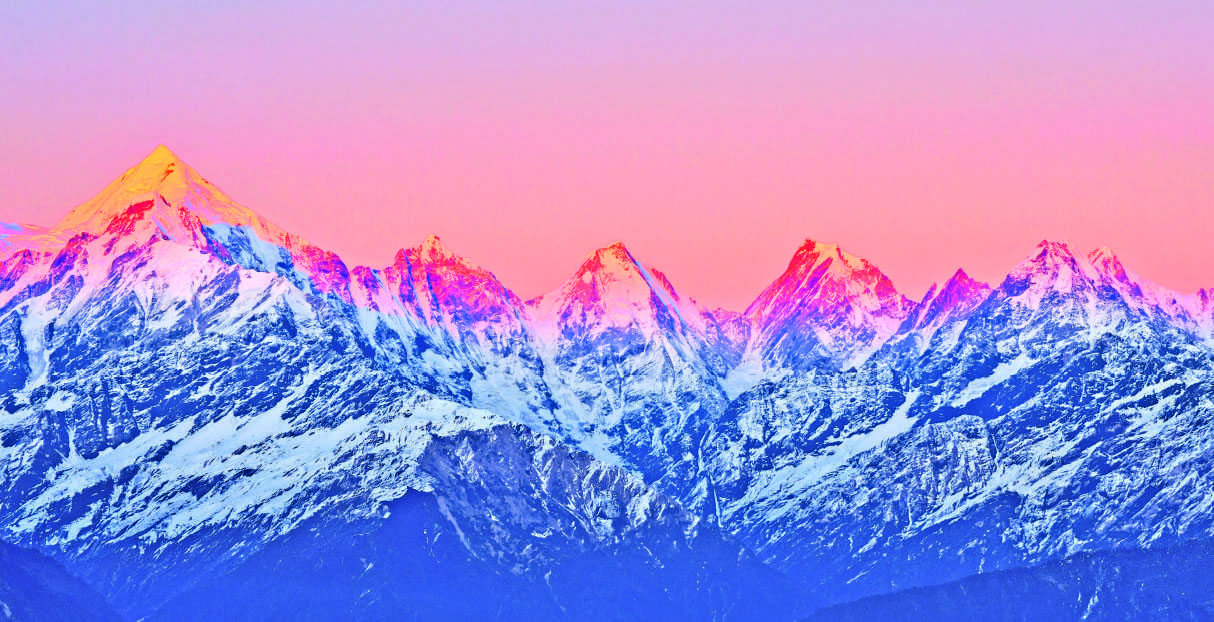 Kumaon—The land of the gods

Kumaon is the Dev Bhoomi of the devatas or, as I call it, the nectar of India`s spiritual and natural heritage. The land of numerous holy spots, rivers, and venerated glaciers, it`s beauty lies in nature as well as in its people and their various dialects.

I have not only visited Kumaon but stayed there for a short while too. Hence, I am able to write with conviction about the essence of this Dev Bhoomi. My visits to Kumaon started when I was seven years of age, with Nainital being the first stay, from where I got the first glimpse of the Nainadevi temple (after which Nainital is named) as well as the beautiful lake which held me captive. I remember running across the streets of Nainital, trying to trace the smell of the prasad (food offering) which was distributed at the temple.

When I was 12, we visited Ranikhet—Queen Meadow—with its undulating hills and small streams, dotted with the temples of Ghanta Devi, Binsar Mahadev, and the 12th Jyotirling of Jageshwar which keeps this spot pristine and pure. The army cantonment and a golf course, which sprawls right up to the apple orchards, are the centre of attraction. One can write volumes about Ranikhet, a small bustling town with cafés and hotels which tourists visit in order to view the thick jungles where one could spot a leopard or two, not to mention some wild snakes.

The districts of Almora and Kausani have numerous ashrams which are dedicated to many saints who did tapasya (penance) for a span of a thousand years to attain salvation. Hence, this region is full of positive vibrations and energies which seem never to change with the seasons. From here, one can view the peaks of Nanda Devi and see the sprawling ranges of the Himalayas. It is said that in the olden times, one commenced one`s journey to the peaks of Kailash Mansarovar from the pious spot of Jageshwar.
Kumaon kept enchanting me with its vivacious energy manifested in the bustling sounds of the locals knitting sweaters and shawls, the ice-creams vendors preparing for the numerous visitors, the students from the famous hill schools, Sherwood and Saint Mary’s, running boisterously down the slopes. The taste of the local cuisine—simple lentils, vegetables with rice, and the home-grown wheat rotis—invite your taste buds every time you pass by the local dhabas (eateries). The Mountain Maggi, as I fondly call it, has the mixture of masalas, curries, onions, and tomatoes, giving the travellers the joy of a simple meal. Kumaon is also a favourite of the mountain bikers, who ride all the way here to witness its spectacular beauty.

The Journey begins
My stint with this spiritual nectar is unending, and given  my passion for exploring the hills, I set upon my visit to Kumaon again for a long stay. Hiring a car from Delhi, I set upon this journey with a friend, who is as adventurous as me. We made our first stop in the jungles of Jim Corbett, which not only meant a visit to the Corbett National Park but also meant exploring the old Sita Vani temple which is dedicated to Goddess Sita. From there, we travelled further to explore an adventure camp which promotes wellness through the experience of angling (fishing).

We reached Corbett within  a span of four to five hours with a pit stop on the way for refreshment. The flowing river Ramganga welcomed us, and the thought of sighting sambar deers and leopards moving about in the region was exciting. Finally, to my joy, we entered Corbett Park, the region created by Sir Jim Corbett, known for the conservation of all animal species, since its inception in the year 1935. We checked in at our hotel, The Tiger Groove, which was christened after the king of the jungle himself.

Our place was a comfortable inn with all the basic facilities. After a quick bath and a meal of simple, home-made sandwiches, we set off in the safari jeep to explore the depths of the jungle. Our safari ride was thrilling, with twists and turns in the jungle, and we made full use of the binoculars we were carrying. Our cameras captured the pugmarks of a tiger which had crossed the jungle in search of water.

The ancient Sita Vani temple
The rich flora and fauna were breathtaking, as if the trees and the jungle were narrating stories of those who had visited before us. Finally, we witnessed the Sita Vani temple which was dedicated to Goddess Sita. The temple is situated in the centre of the jungle with short streams running past it, with a tiny waterfall, through which the fresh water passes. It has an ancient feel to it which is indicative of the myth that Lord Ram, while crossing over to Sri Lanka, stopped here and did tapasya for a while with Ma Sita and Laxman. It is said that Ma Sita, in all her magnanimous form, is present in the temple, guarding the jungles and blessing the devotees who pay their respects to her at the ancient temple.

After taking some prasad from the temple to mark this pious journey, we proceeded on our way out of the jungle but not before witnessing the Jim Corbett museum which has the remains of a tiger, the book Man-eaters of Kumaon, and numerous bird species which were a sight to behold. Feeling invigorated with divine positive energy, we returned to The Tiger Groove to spend the night and be refreshed to take our next journey to the angling camp. Our night  was silent, with the barks of the deer and the movements of leopards along the terrain. Sitting by a bonfire, we relished our basic meal of yellow lentils and cottage cheese with some rice. To round off our visit, we got souvenirs: Tiger t-shirts and cups to remind us of the tigers of Corbett Park.

The angling camp at Marchula
The next morning, we proceeded to the angling camp, which is located in the region of Marchula, at a distance of three hours from Corbett Park. Driving through the mountain region, we were full of the divine positive energy from the Sita Vani temple. On our way, we spotted the Garjiya Devi temple, which is dedicated to Goddess Laxmi, who is said to give us purity and power. This temple is worshipped by devotees during Kartik Purnima and Guru Nanak Jayanti. It is located on the river Kosi, which is said to be the tributary of the river Ramganga.
We finally reached our adventure camp in Marchula, which is located on a small stream off the river Ramganga, which passes by the region. The camp— overlooking the river and a line of mountains which seem to be existing for a million years—is pristine.

The camp is quaint with small huts and an outdoor kitchen, and a sign which says ‘Beware of the leopard’. Yes, the leopard is often spotted all over this region. As we entered the camp, we were taken to our rooms for refreshments, after which we were called for a briefing about the angling—the wellness theme.

After refreshments,  as we proceeded towards the dining area, I spotted a small temple on the way beneath the camp. This temple is said to be dedicated to Lord Shiva, who is the keeper of the fish, as they say in the camp.

The fish is supposed to be the healing species that can cure any disease, and the practice of catching the fish, and meditation, can alter an individual’s thinking. This really captivated me wholly. After the briefing at the camp, we went to rest and relax, and soon thereafter, we were taken for our first angling exercise. We had to do a bit of trekking down the hill, towards the Ramganga stream and there, we were given our fishing rods. With the water passing by our feet, the mountains standing still, and the wind caressing us, it seemed to be an ideal setting for any mystical experience to take place.

The mesmerising experience
We began to catch the fish which were swimming in the water, and as the process began, one started hearing the chants of the venerated mantra ‘Om Namah Shivaya’ sung by the camp staff, releasing all of us from our various thought processes and making us calm and composed. It seemed as if the presence of Lord Shiva was guiding us with our fishing experience. After a while of doing this practice for, say, 30 minutes, one could feel the body becoming increasingly calm and our mind more focused.
In the camp, it is said that they catch the big fish called mahseer, which is a rare breed and, according to legend, it has been created  by the Lord Himself in order to preserve the world after the apocalypse. We released the fish back into the water after the exercise was over. We proceeded back to the camp by trekking upward and I, by that time, had managed to feel more calm and composed with the chants. At mealtime, we were treated to some sumptuous Italian food and apple pie, which were really well made by the chef, according to our liking.
My heart was filled with gratitude for Kumaon—a land of plenty with flora, fauna, and mysticism which alters the very course of your life. The pious energies which it has possessed for more than a million years, still persist here, giving everyone who visits it the joy of living. My journey was made possible by Heritage Getaways, which makes all my dream travel escapes come true.