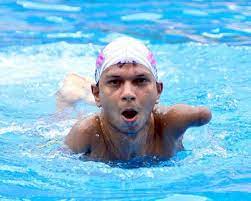 Swimming through problems of life

We keep looking around for inspiration when there are many around us who we can look up to or emulate. One of them is Vishwas, a true hero. He has amazingly taken on life despite facing what many would call challenges. His father, Satyanarayana Murthy, was a clerk in the agriculture department in Kolar. Sixteen years ago, when Vishwas was watering the cemented portions of the home that they were building, he suddenly lost balance and fell on live electric wires. His father rushed to save him from being electrocuted but lost his life. After being in a coma for two months, Vishwas recovered. However, he lost his hands.

The family then moved to Bengaluru. Vishwas completed his B.Com degree and took up some jobs as well. He says he became interested in swimming thanks to the support of family and friends who often took him along when they went for kung fu, dance, and swimming classes.

Two NGOs, Astha and Book A Smile, came to Vishwas’s aid to help him achieve his goal of becoming a professional swimmer. They provided him with the trainers and infrastructure he needed to go after his dreams. This was much before social media was very popular, but his friends proved to be his pillars of support, motivating him to keep going in all areas of life. He makes particular mention of Mr Sunil John of Astha, who was a great support in his journey.

In an amazing display of true courage and hard work in the face of all odds, the champion swimmer trained in butterfly, backstroke, breaststroke, and freestyle swimming to win medals in the first three categories in Canada in 2016, and a film may be made on him now. The most impressive thing about Vishwas is that he never cribs. On the contrary, he has made himself a person who everyone looks up to as a role model of determination and verve.

Vishwas still keeps dreaming of new goals, and I, for one, am sure that he will achieve them. He is open to guiding anyone who needs guidance and can be reached on social media on Facebook  at https://www.facebook.com/vishwasks.vishu.5  and on Instagram at https://instagram.com/stories/vishwasksvishu/2856784597757632444?utm_source=ig_story_item_share&igshid=MDJmNzVkMjY=

Kudos, Vishwas,  for making us understand that nothing is impossible if one perseveres.