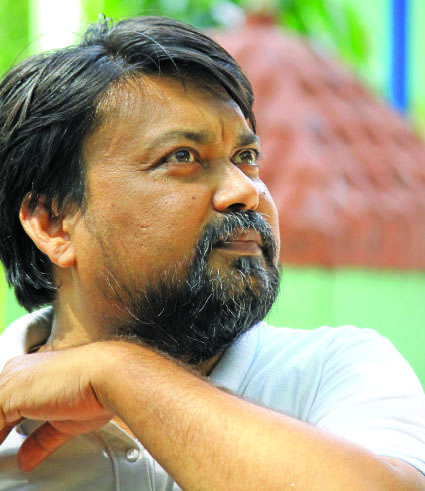 The art of listening

The art of listening
A resident of Hyderabad Partha Gupta is a modern day yogi who has revealed to the common man, the secrets of manifestation that lie in his breath. Below is an account of his realisation of the truth of Universal Oneness.

Love must be the state of sensing no separation with anything or anyone. Oneness is probably best defined as that state of no separation. The essence of this idea has always been with me since my early days at the Chinmaya Missionary School. However, living it took a time frame which is the journey.

My first experience of non-separation.
My first experience of real pain was when, as a seven-year-old playful kid, I came across a roadside stall selling goat meat at a Sunday bazaar. I was holidaying during the summer vacation in my mother’s hometown, Jalpaiguri, when I saw this for the first time in my life. People gathered by this stall to buy meat. There were a few carcasses dangling by the hook when I saw the butcher hold the knife on the neck of a goat. While he was fast at what he did next, I had an experience of choking and a sharp pain in my neck as if the goat was me and it was my neck that was being chopped.

Even now, the memory of this childhood experience is very vivid. This experience never left me. I constantly thought about why I was undergoing the experience of pain when it was the goat that was suffering it.

My first experience with my guru: I am not the body.
Being an alumnus of the Chinmaya Missionary School, the Bhagavad Gita and bhajans (devotional songs) were a part of my growing up. In all possibility, this laid the foundation for a probing mind, deeply curious about the show called life. Who is running this show? Can I have a conscious role in what’s shaping my experiences in life?

It’s been more than a decade since the initial internet days that brought me in touch with Swami Sarvabhutananda Saraswati, a Vedanta master who was an industrialist and took sanyasa (renunciation) after completing all his duties towards samsara (the world).

The second day I met him, he took me through a guided meditation involving observation of the body. It was a nice, simple, flowing exercise, awaiting a climax. Once I finished observing the whole body as guided in the process, he said, “Whatever you can observe are mere objects. Like the fan, the table, and other objects in this space, you have just observed your body. It is a mere object, it is not you. You are not the body; you are in the body. This is your body, it is not you”.

As I saw myself separate from the body for the first time, there was a distinct experience of the Self, the being that was experiencing life through this body. An experience that laid the foundation in me that I was thought in the body, and as a thought, I could, in fact, exist anywhere, everywhere, in everyone and as anyone.

My first initiation from my mother.
I got initiated into the life and teaching of Shri Loknath Baba, an eighteenth-century mystic from Bengal, by my mother, an ardent devotee and believer in the presence of the mystical energy or consciousness when touched upon. It was very interesting to see her touch upon this presence, in any challenge of her life from not finding something to larger aspects of life like receiving support from life in every venture the family indulged in. The smooth going was baffling, drawing our attention to a certain presence that seemed so real and constantly tangibly touched upon.

She took me to places in north Bengal where Shri Loknath Baba is known to have spent some time. The very thought that I was right now breathing in that space where Shri Loknath breathed too, meant that the space held in its memory that breath, that vibe, that frequency. It was like having access to many insights that were to follow, the source being the realisation of the presence recorded in the history of that space. It’s still the most tangible part of my work—the accessing of that consciousness.

Swami Brahmananda gave me the quantum physics reflection in yoga.
This was also the period in which a chance meeting with Swami Brahmananda from the Jog Maya ashram, Bodh Gaya, happened. As he stayed for a month in the close vicinity of my house, a simple meeting of 10–15 minutes every day helped awaken the idea of materialistic manifestation of thought.

It was much later that I came to read about the phenomena of the observer having an effect on that which is being observed, as in quantum physics. Swamiji introduced this to me in one of my vulnerable moments with finances, relationships, and insecurities. In no time, the home situation was peaceful, opportunities opened up, and insights became documents which later became a part of my books.

I asked him how this was possible, and I still have his voice ringing in my head saying that all issues in life crop up because you think you are separate from it. When you lose this separation, you become it, and so you bring about the necessary shift. For now, I only had to tap into the fact that you were me too. And so, as you, I made the necessary shift.

Today, Self-realisation—the point of no separation and oneness—has become an integral part of my work, enjoying my communications from me here to me there.

Everything exists because of the all-pervading spirit. If it exists, it has a purpose and the purpose of its very existence  is its Soul. When you give it your all, it gives all of it to you. When this becomes one’s constant awareness, one is living in the womb of the Presence.

Consciousness heals; the foundation is Oneness
When we face a certain situation, the meaning that gets formed in us defines our mental-emotional states and interferes with our decision-making. When one shares one’s situation with someone who truly listens and one who has travelled well within and is wise within, the very same situation creates a different experience in the listener.

What is alarming and causing great stress and anxiety in one who is sharing it, becomes just another simple, un-alarming, and easy situation for the other. Since there is no other, the intensity of the situation, now defused in the listener, begins to show as a shift in the one who shared the situation, and healing happens.

So, it is everybody’s experience in life that whenever you have shared your concern with someone who has not travelled more than you within, your concern grew further, unknown to you, while your sharing with someone who has travelled well within and whom you considered wise, has led you to experience healing. Just the art of truly listening can cause healing. This is because at the level of the Self, we are all one and this can be our experience everywhere.

The secret of a great relationship in every aspect of life is this simple knowing that it’s you everywhere. It is precisely why, when we treat everyone just like we would treat ourselves, we will experience the best reflections from life. One who lives this is naturally capable of bringing in a shift in everyone’s life, for one is not in separation. This is being a Bodhi too.

FROM ME HERE TO ME THERE.