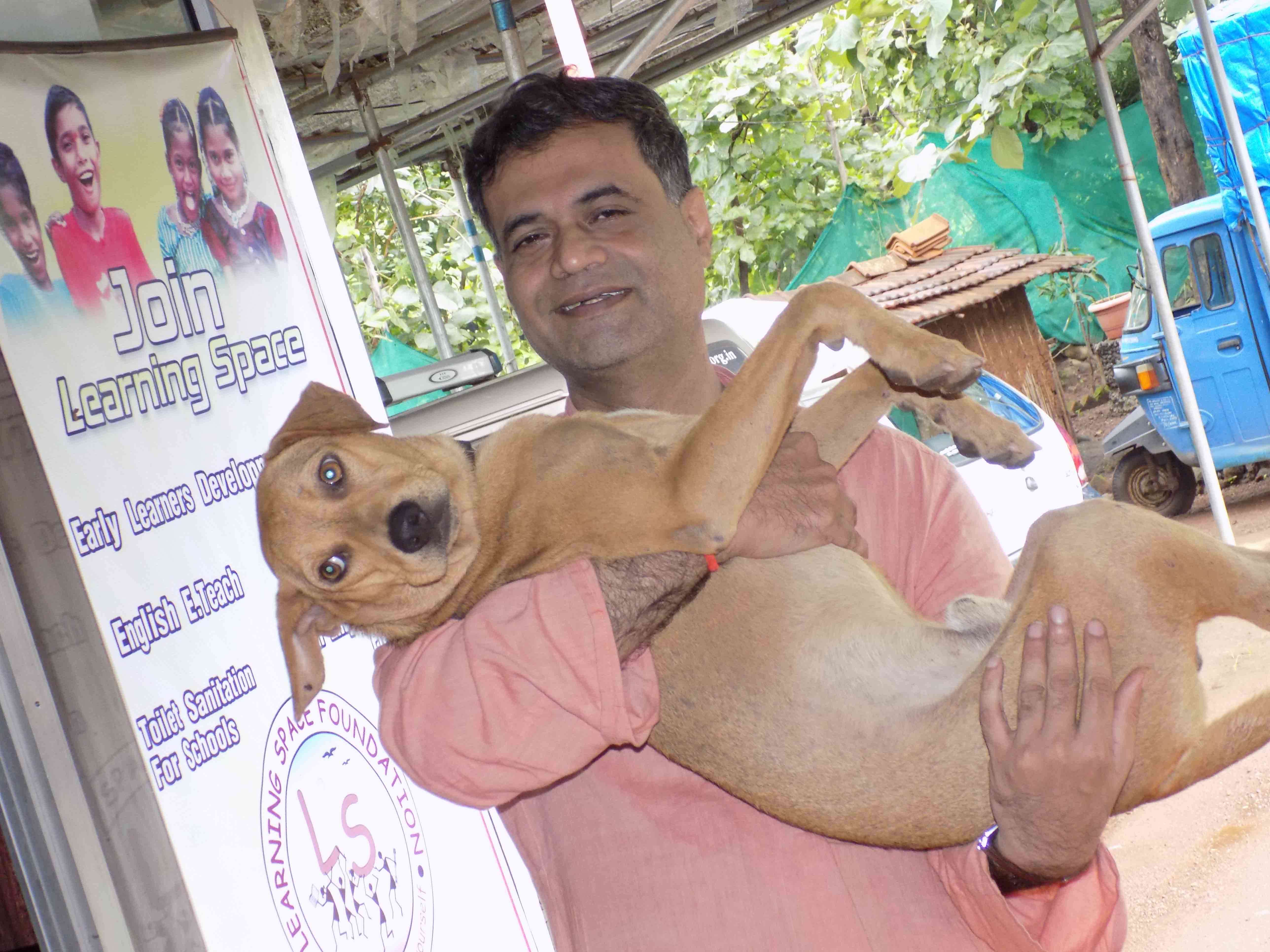 the bearer of hope

Anuradha Sahu follows the journey of Nitin Orayan, who forsook a lucrative career to set up an educational foundation in a small town, to mentor tribal children and further their life prospects

"One must seek the shortest way and the fastest means to get back home—to turn the spark within into a blaze, to be merged in and to identify with that greater fire which ignited the spark.” ~ Baba Nityananda

Reading the book The Mysterious One gave me a glimpse of the sublime inner world of Nitin Orayan.

His kind heart, his sensitive mind, and his luminous soul came to the fore as I flipped through the pages of his lyrical book that encapsulates the spiritual journey of a young boy passionately looking for truth.

When I met Nitin personally at his Learning Space Foundation in Ganeshpuri district near Mumbai, I was captivated by his honesty, sincerity, and simplicity. His foundation works to provide quality education to tribal children, helping them build a promising future.

He revealed his life journey to me in a freewheeling conversation.

“Despite being brought up in a metro, I could somehow never relate to the city environment and felt a vacuum within, often nudged by queries like, ‘What is the true purpose of life? Is this all there is to it or is there something beyond?’ says Nitin.

A graduate in journalism and mass communications from a prominent Mumbai institute, Nitin began his career assisting editors and copywriters, and soon progressed to having a team of his own, one that handled marketing and product launches, mainly those of pharma companies.

“It was the usual corporate grind day in, day out, and I got so tired of the entire wearisome routine that I yearned for a break from it all,” he says. In 2002, as the monsoons arrived to quench the thirst of a parched earth, he took time off to visit the countryside for some soul-searching and travelled to the outskirts of Mumbai city. Little knowing, perhaps, that the quality time he spent in the twin towns of Ganeshpuri-Vajreshwari (located in the Tansa river valley at the foothills of the Mandakini mountains) would gift him his innate calling in life.

As he penned his innermost thoughts sitting by the riverside, his interactions with the villagers gave him an insight into the prevailing village life. The school children, capering by the river banks, soon warmed up to their urban guest and a joyful camaraderie ensued. Nitin narrated interesting stories and played innovative games with the children, which were not only enjoyable but informative as well.

“Education in my time was very different from what it is today. I’d simply dislike the idea of sitting in a classroom for seven–eight hours and be talked down to. I found that the local schools followed a similar pattern of learning by rote, with no avenue for self-expression, the sole objective being to pass the exams,” says Nitin. His interactions with the young children had made him more receptive to their point of view and, somewhere within, he knew that this was something he enjoyed doing and wanted to pursue it further. Serendipitously, the seed of Learning Space was sown.

The call of the inner voice

The memories of the brief countryside rendezvous stayed on even after he returned to his city base. “When I shared my idea with friends back home, they thought I must be crazy to give up city life for the village. Scepticism and negative responses abounded, but I preferred to listen to my inner voice and in December 2004, took the big leap and got myself a place on rent in Ganeshpuri.

The twin towns of Vajreshwari and Ganeshpuri are famed for their hot springs and temples. While Vajreshwari has various ancient temples, Ganeshpuri is home to the shrine and samadhi of Baba Nityananda (Indian guru and saint). Well-known as places of pilgrimage, both towns witness a lot of visitors all year round.

“During my previous two-month stint, in the course of my evening walks, I’d often visit the shrine and samadhi of Baba Nityananda. Though I had never seen or heard about Baba Nityananda before, I felt a strong connection with the saint, the moment I visited his samadhi. I could sense a deep transformation within and also realised the true purpose of my life that I had been seeking all the while,” says Nitin.

Having left behind a steady income source, a new means of sustainable livelihood had to be found and he approached local schools who offered to hire him as an advisor to counsel children and teachers. During the eight months stint, he got an insight into what the village schools lacked and a unique breakthrough came about when he held a personality development and English language enhancement vacation programme for the students. This was the discovery of a new concept called Learning Space—a space where learning flourished with the right intention and interaction and a heart-to-heart connection between the teacher and the student.

Nitin believes, “The dynamics of teaching-learning are transformed when a learning space is created with the right intent, interaction, and a true heart connection.” This new style of innovative and constructive learning was a welcome experience for all. Some of the students from the programme also joined their mentor to consolidate an idea of an educational social service program to better the teaching methods and enrich the lives of village children, in a way similar to what they had experienced. This was the birth of the unique ‘Learning Space’.

To meet the inspiration behind the Learning Space Foundation, we set out for Ganeshpuri on a bright Sunday morning, as Nitin always has a busy agenda on weekdays. After a long drive of two and a half hours, the calm of the twin towns Ganeshpuri and Vajreshwari was a welcome change from the city chaos that we’d left behind.

Travelling the long winding paths lined with tall coconut palms, we finally reached the Foundation to be welcomed smilingly by Nitin and a couple of his ex-students-turned volunteers. As we settled down in the cool environs around a big table, an adorable hazel-eyed and fawn-like pup came bouncing inside. “That’s Hazel,” said a voice from behind, and we met Lizzie (Elizabeth Rose) from the USA , who worked as a volunteer with Learning Space Foundation. Appearing completely at home in her Indian attire and surroundings, she enthusiastically shared her experiences and added smilingly, “I just love coming back here; there’s so much to learn, and it’s so fulfilling.”

Thanks to the consistent efforts of Nitin, the village children who earlier had the only option of becoming farm-hands or tilling whatever little land they owned, in whatever way they could, now have access to the latest in education and technology, farming included. Earlier, farming was not a lucrative option as the yields were not desirable, but with the introduction of organic farming, new avenues have opened up and the villagers are more upbeat and self-contained.

“The organic farm is my dream project,” said Nitin, as he took us around the beautiful organic farm, which had neat rows of vegetables with proper name tags: cauliflower, brinjal, tomatoes, spinach, coriander, and many more. Sprinklers all around ensure a steady and good water supply. “No chemical manure or pesticides are used here; it’s all organic,” said Lizzie. Farm-fresh veggies are in demand at the local hotels and serve as a good source of income for the villagers, who otherwise had to work as ordinary farm-hands on others’ farms, despite having their own farming plots. “Since their land would not yield anything, they were forced to work for others,” informed Nitin.

Students who wish to continue their education after the 10th std. are aptly guided by Nitin, who says, “Many of them are pursuing their education and careers in the city colleges.” After the completion of their studies, many of them return to the village to teach others. “I want to share my knowledge and help others in my village just as Nitin Sir helped me,” said one ex-student of Nitin.

Computer training is offered to middle level school children. The computer training class is a quaint well-equipped room complete with modern computers and accessories, with beautiful Warli paintings on the wall. Outside the room, we met a beaming Smita, a budding electronics engineer. Having recently written her exams, she had come to meet her mentor and express her gratitude. Her proud parents were all appreciation for ‘Nitin Sir,’ who had taken pains to help Smita achieve what she had.

In a move towards empowering the village women, vocational training is imparted to them by way of painting and bag-making skills, but a 12-month market need is yet to be generated, for them to facilitate a steady source of income,” says Nitin.

A mentor and a guide to students and villagers alike, Learning Space Foundation also has under its wings ‘JeevaMitra’ an initiative by Genevieve Dubash. JeevaMitra contributes towards building a sustainable living model for the innumerable dogs and cats at the centre. The organic farm tour having concluded, we met Genevieve. She manages the animal shelter, which is situated a little distance away from the Foundation premises. The shelter has a number of strays that Genevieve had rescued on her many trips to the city and back. As she narrated intriguing stories about the pets, her love and dedication for the mute creatures was palpable. On asking her if she missed the city life, given her city-bred background, she answered, “I do visit the city, but whenever I’m out there, I long to be back at the farm. It's so much more peaceful.” Well, we couldn’t agree more.

Education-the-fun-way, effective self-expression, communication skills, computers, engineering—it’s transformation all the way at Learning Space Foundation! After a struggle of almost a decade, the diligent efforts of Nitin have finally seen the light of day and the remarkable achievements have turned even sceptics into patrons.

As the setting sun coloured the skies crimson, the colours of love, hope, and joyful camaraderie at Learning Space Foundation painted a picture that spoke a thousand words. A picture that portrayed the true meaning of purposeful living.

Akin to the very bright Orion constellation that helps in locating other stars in the galaxy, Nitin Orayan shines as the guiding light, teaching and mentoring potential leaders, the creators of change.

“As the mind struggles with the eternal question: whether to 'make it happen' or 'let it happen', exercise silence and 'be' consciously present in the moment. Then the inevitable will manifest one way or the other; the miracle of manifestation is ever present if you are open and aware.”