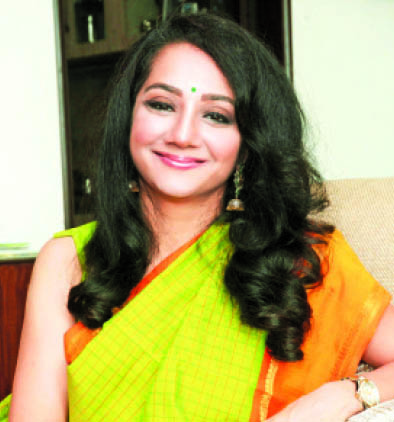 THE BODHI TREE OF MUSIC

Nithya Rajendran sings the praises of Indian classical music through her venture Music Vruksh, which promotes its mood-lifting and meditative qualities

I was the stereotypical Chennai girl, initiated into Bharatanatyam and Carnatic classical music at age five and brought up with some of the festive traditions typical to a Tamil household: the Golu dolls display during Navratri, drawing tiny feet with rice flour for Krishna during Janmashtami, early morning oil bath on Diwali day followed by 4 a.m. firecrackers, and so on. I was also lucky to be in a school that placed immense importance on music and dance. So, culture and the arts were so interwoven into my being that I could not imagine a life without them.

Outwardly, I was all this. But my inner journey has been far from stereotypical. Starting from middle school,  I  saw my personality acquire some  very distinct traits:  questioning everything, pondering over philosophical matters, leaning towards reading self-development material, gravitating towards introspective people, and veering towards discussing somewhat profound subjects (at least for a child that age). Of course, teenage and youth came with its share of paradoxical ups and downs too. Anxiety, an eating disorder, and fear of open spaces (agoraphobia) accompanied the great highs: recognition from society and peers for my musical accomplishments, scholarships, stage performances, and audience appreciation.

As life chugged along, I dabbled in different professions like advertising and photography (while Carnatic and Hindustani music, including concert performances, were active side-pursuits). Meanwhile, I also got introduced to meditation and have now been a practitioner for more than a decade. As the years passed, I grew to realise more and more profound connections between classical music practices and my spiritual path of meditation and mindfulness.

The Magic Of Music
The first realisation was about the connection between music and moods. Whenever there was music around me, such as during or after a stage performance or soon after listening to a beautiful moving raga, either in the form of a film song or a classical music bandish, I would feel transformed! The ability of Indian ragas to transform mood was not only instantaneous but also long-lasting. To my amazement, a low sullen mood after a bad exam result would soar to elation and happiness soon after engaging with a beautiful raga-based song. Or the anger at a boss who had unreasonably yelled at me would transform to forgiveness and a feeling of being able to transcend that anger almost instantaneously. A beautiful Rafi song in Raga Bageshree would transform irritability into a pleasant feeling of bliss and peace.

It was this growing realisation of the depth of Indian classical music and its connection with mental states and mindfulness that led me to take up music full-time around ten years ago. This inspiration has been the foundation of my venture Music Vruksh, which aims to demystify Indian classical music and make it accessible to everybody for its spiritual, healing, emotive, and aesthetic potential through workshops, lecture demonstrations, and concerts.

These effects were also attested to by numerous students who have learnt music from me over the years. Sometimes they would come in with a headache and go back after the music session totally symptom-free. A chain smoker was able to reduce smoking after six months of engaging with classical music lessons. A person going through a bad personal patch was able to cathartically cry and release pent-up stress when she connected with one of the ragas she was learning. And countless other such testimonials!

Emotional Catharsis
One other beautiful incident comes to mind. A young woman, a domestic helper taking care of a child during one of my performances, suddenly vanished for a few minutes leaving the child with the person seated next to her. I noticed this and, post the performance, inquired as I was quite concerned about what I thought was irresponsible behaviour. The woman confessed to having got up to let out a surge of emotion through her tears, after hearing a particular portion of my rendition. It was even more interesting to note that this thorough catharsis happened despite the fact that she was completely uninitiated into classical music and had not intellectually understood what she was listening to!

The second realisation was about the ability of music to bring us to the present. When I would sit for riyaaz (practice), I noticed that some of the basic riyaaz practices, such as just singing a key with the drone of the tanpura (string instrument used for accompaniment) sound or staying on a note, had an amazing ability to bring me to the present instant. Everything became still, peaceful, and divine at that moment. I would feel TOTAL commitment to the present. I can only describe it as a thoughtless, past-free, future-free state of bliss. This also made me realise that one doesn’t even need to have deep knowledge of music to use these riyaaz techniques towards better meditative awareness.

Ragas And Human Beings
Thirdly, I noticed that using rhythm through listening, in the form of classical or folk taals (rhythmic patterns) on instruments such as the drums, tabla, or mridangam, seemed to alleviate feelings of confusion or disorder. I can vouch for that with personal experience. Being able to move with the predictable pace of rhythm and sway the body to it, brings a sense of relief and pleasure from the irritable and chaotic feelings that can accompany a bad mood. The set of nebulous emotions that accompany a bad day can seamlessly transform into organised thought, a relaxed mood, and reduce the fear of risk or uncertainty.

I have noticed that children, even belonging to the new-age Adele and Beyonce era, perk their ears up involuntarily when they hear a song in a beautiful raga, like Hamsadhwani or Yaman. I once noticed a four-year-old stop to listen suddenly with rapt attention when I was playing the basic scale of Yaman on the harmonium. After five minutes of intently listening, she said, “Aunty, that was beaauuuttiful!” To me, hearing this from a four-year-old child brought home to me an important truth about the universal appeal and power of Indian classical music.

Musically Aware
This is a treasure that we sit on, without even knowing it. It is a living, breathing, positive phenomenal energy, sitting right beside us, present all around us, ready to be accessed. It is time we took note of the potential Indian classical music has—to transform moods, to enable mindfulness, to unlock creativity, and to bring us closer to divinity.

What better way to feel happy in an instant?

What better way to alleviate anxiety without or with minimal medical intervention?

What better way to teach our children and ourselves to be aware and in the present?

What better way to lift ourselves out of things that bother us and bring us down from time to time—at home, at work, or anywhere else?

What better way than reviving our own traditional musical culture and bringing it back into our lives?

Let Raga Darbari allow us to cathartically release our tensions.