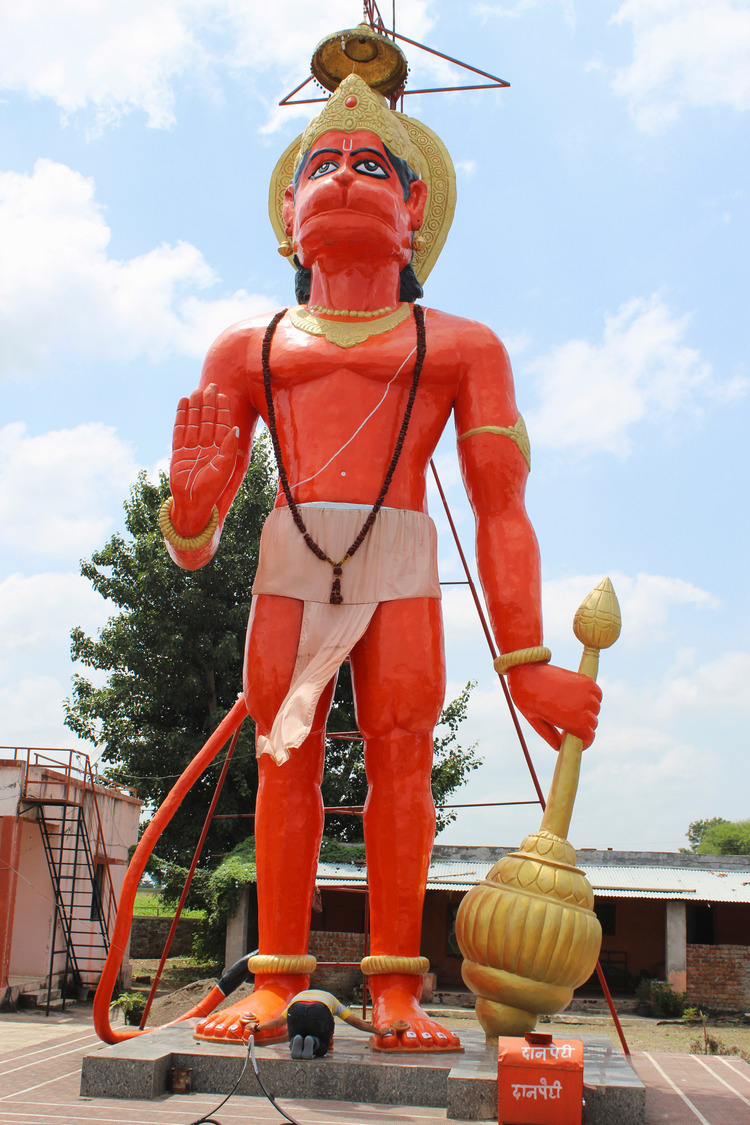 A road trip to the renowned shrine of Salasar Balaji in the Shekhawati region of picturesque Rajasthan, leaves Nandini Hoon feeling deeply enchanted and submerged in Divine grace

One such lore that intrigued me was of Salasar Balaji. Salasar is a little town situated in the Churu district of Rajasthan, and is popular for its 200 year old Hanuman temple. Apparently, the deity _ Lord Hanuman _ is said to be a Swayambhu, i.e., self-manifested. The lore goes like this: Sometime during the early 17th century, a farmer in a village called Asota hit a solid stone while ploughing his fields. He dug up the place to find a sand covered idol of Balaji. Soon, the thakur (chief) of this village had a vision wherein Lord Balaji told him to move the idol to Churu in Salasar (at the present site). Lord Balaji also appeared in the dream of a local saintly figure, Mohandas Maharaj of Salasar. A message from Mohandas ji to thakur ultimately led to establishment of the idol in what is today called Salasar Dham.

It is believed that Lord Balaji is the living demigod of Kaliyug and is omnipresent across Rajasthan. He happens to manifest himself in various forms to meet his devotees when the need and the time arises. This piqued my interest, and I embarked upon a journey to meet the lord himself, along with a group of similar curious travellers.

Our journey started in Delhi and soon we were on the national highway, traversing through the dust-covered, semi-arid Shekhawati region. A great expanse of Thar desert stretched right before us, with its shifting sand dunes forming an undulating fresco every now and then. Shorn of any other vegetation, Shekhawati had on its platter only a handful of kikar (or babool) trees. As we drove through the sand, glimpses of Rajasthani women adorned in vibrant hues  of pink, yellows, electric blues, and menfolk in their traditional attire and silver jewellery, dazzled us. Camels strutting gracefully in the sand duly completed the postcard image of Rajasthan.

Finally we pulled up in the town of Salasar where the lord awaited our arrival. Like the umpteen small towns of this vast country, the dusty, little town of Salasar too wafted off the strong aroma of timelessness, the one which gives each of these otherwise nondescript towns their unique characteristics.

The temple has a fairly long complex which is spotlessly clean and maintained beautifully by the locals. It is lined with shops, rest houses, ashrams and eateries. We reached a quadrangle teeming with colourful shops selling prasad. The aroma of locally prepared laddoos, churma, bundi, and chakki tantalised my taste buds and a longing for some tea and snacks ensnared my senses. However, the lord came first.

We bought laddoos for prasad along with a Hanuman Pataka (flag) which is considered auspicious. To my utter amazement, the main temple is inlaid with beautiful silver work, and sports doors and railings made up of solid silver. However, they was nothing compared to the wonder of having the darshan of the lord’s idol. This is probably the only idol of him with a moustache _ the curled-at-the-ends kind sported by local menfolk. A diamond encrusted crown adorned his head and I stood spellbound before him. It is said that whoever seeks Balaji’s blessings gets his past life karma warded off and the lord frees him or her of their karmic bondage. With someone chanting the hanuman chalisa behind me, I sat soaking in the atmosphere pulsating with spiritual energy.

After paying my reverence, I took one round of the shrine. Parikrama or circumambulation is believed to mark the end of the cycle of birth and death. As I entered the temple complex, I noticed a tall, widely spread, kikar tree in the centre of the courtyard with colourful threads tied on it. I was told that I could tie a thread to make a wish and untie it when it was granted. Beside the tree, homas were being performed as a thanksgiving ritual to the lord. For a moment I felt I had transcended with the lord himself in that ethereal atmosphere.

As I proceeded out with prasad in my hands, I started experiencing a shower of energy pouring upon me, along with the blessings of the lord Himself. The mystic terrains of Rajasthan, and the atmosphere of the temple had me intoxicated with an innate feeling of oneness with the Divine. It was as if He had stirred my soul, washed a lot of unsaid things and negated my unending karmas, things which a human mind cannot even imagine.

Soon, it was time to bid farewell to the Lord with a promise of visiting him again. On my way out, I came across eateries serving the local Rajasthani cuisine, which seemed  tinged with a Gujarati essence. I had my fill and in no time, was in the car, heading back to Delhi.

Our drive back from Salasar Balaji was a picturesque one. We sighted herds of  Neelgai grazing in the fields, and old Rajasthani havelis displaying colourful fresco work, preserved since centuries. Shekhawati-Mandawa is a beautiful and fascinating region with its old frescoed havelis painted in organic colours. These vistas pulled me with an inexplicable vigour and we drove into Mandawa region _ an hour and a half hour drive away from Salasar. Our car stopped in front of the massive iron gates of a beautiful haveli. The guard came to greet us and escorted us inside. This haveli was constructed in the mid 18th century and run by a noble family of Mandawa. We decided to have our meal there and look around the castle. The  beautiful rooms of the haveli were maintained in the traditional way, just like the times when the nobility lived. There was an ayurveda spa, a beautiful pool and many more things on offer, making it look like an oasis in the desert. The meal was quite sumptuous and even though I didn’t want to leave that place I had to take the journey ahead. I have decided to come here some other time and and pen down my memoir.

We were enroute again and after a while stopped at a local café which served the best elachi chai. We had some delicious fritters along with it and resumed our onward journey. By the time we were headed back to Delhi, it was twilight, with the sun setting over the vast expanse of the desert, giving it a rich, mystical look. The chants of the lord were ringing my ears. I felt submerged in the pure joy of divinity. On the whole, the trip to Salasar Balaji left me with deep gratitude towards Lord Hanuman and his blessings which he had generously showered on me.

Distance: Salasar Balaji is at a distance of around 290 kms from Delhi, in the Churu district of Rajasthan, next to the region of Shekhawati.

Time to visit: Throughout the year.

Delhi based Nanidini Hoon is a trained dancer, theatre artist, filmmaker, poet, face reader and an avid travel blogger. She is conducting a Dance & Inner Wellbeing retreat in Naldehra