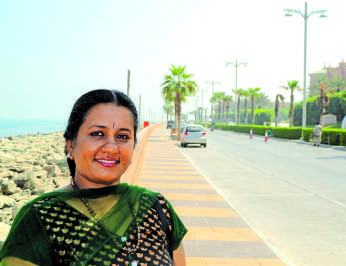 The flower of consciousness

The flower of consciousness
Rajini Menon, author of the book Face to Face with Reality, is a self-realised guru who attained the state of liberation by keeping a strict vigil on her inner world. It happened without the guidance of a living guru, any spiritual practice, and the knowledge of any spiritual path.

The transformation happened on Guru Purnima day in the year 2008. Before a description of the event itself is given, it is also important to mention a few significant factors or events leading up to it. Life itself was my sadhana; there were no sadhanas apart from it.

Introspection
It was a daily routine for me, as a small child, to introspect every night before going to sleep. I would look for wrong actions or thoughts that I had committed during the day, and if I did find them, I would hold my ears and promise myself not to repeat them. When I would successfully restrain from doing wrong, following my buddhi (inner wisdom), I would pat myself for the good I did.

The method I, as a little girl, adopted to discriminate between right and wrong is worth a little elaboration. For me, all the desires that came in my mind were like tea prepared with tea leaves before straining. So, I would let all my desires in the form of thoughts pass through my buddhi—just like a strainer used to separate the tea leaves. The thoughts or desires my buddhi granted permission or ‘okayed’ were put into action, and those that were not ‘okayed’ were discarded at once.

Past life effect
Once, around the same age, I happened to see a one-page pictorial story in a magazine, in a language I could not understand. So I approached my mother to read it out to me. The story was that of Satyavan and Savitri, and after listening to it, I had several questions: “How could Savitri get her husband’s life back from Yama?” “What was that love which gave Savitri the power to bring back her dead husband to life?” And so on. My mother told me that the power in Savitri’s love was due to the pathi-vratha dharma and that would mean that Savitri never even thought of or imagined any man other than her husband. In my innocent child’s heart arose a deep desire to be like Savitri in my life. This kind of deep desire does not happen every time a story is heard by a child. Here, this desire needed only a trigger to get activated as it was already there from a previous birth. This activation resulted in my being a hundred per cent celibate, both in mind and body, till I got married.

Destiny prevails
By the time I was in high school, my righteous living had become fully spontaneous. I no longer had to introspect nor was any correction needed. There was a long period of time when I thought I would never get married and wanted to devote my life to the betterment of mankind through scientific research. During those days, if I had found a spiritual outlet, I would have chosen that path—such was my constitution. I could have chosen such a path only if I had known of the existence of a spiritual world or any spiritual organization or the like. But destiny had a married householder’s life in store for me, probably to help me drop the only mentionable intense vasana (past life impression) of attachment that I had come with in this birth. I had to get married, have children, take up a ten-to-five routine job, and lead a mundane life. But wherever I was providentially placed, irrespective of that, righteousness was my life and inner conscience, my stable guiding light.

Acid test
Later in life, Mother Nature (Prakruthi) put my righteousness to test, especially in relation to attachment. In life situations, attachment pulled me from one side and righteousness, the other. As I was spontaneously successful in my righteousness, situations started getting tougher and tougher. It was like walking a tightrope between two high-rise buildings. There appeared even tougher situations where being righteous would shatter me into pieces. With my success in being righteous even in those tough situations, the tightrope got replaced by a razor edge. These very tough situations lasted for around 10 years.

One of such very intense periods happened in the months of April and May of 2008. In these two months, I had to literally act out to myself, internally, that I was a deity in a temple with a blessing posture, who blesses, irrespective of who comes in front of her sanctum sanctorum. The love for the Divine in me and to do what the Divine in me wishes—which is nothing but righteousness—was so strong in me that, in order to let righteousness prevail, I threw Rajini out of myself. If I were to let Rajini surface even for a second, things would go haywire, and in order to stick to righteousness, I, with all alertness, maintained each second of my waking time internally as a deity in a temple.

Righteousness all the way
Even in those days, when I was undergoing tremendous pain on account of being righteous, I always told my children that they should live their life righteously in all situations. Advising my own children to be always righteous, despite the pain that such righteousness brings with it, shows my deep feelings about righteous living. Such a deep conviction cannot come but from some previous-birth good karmas (sukritam). I had no idea about the small ‘I’ or the big ‘I’ or self-realisation or anything related to that. I never desired for self-realisation because I never knew of any such thing. The only reason for me to choose righteousness—even in a situation when I could see my own extinction by being righteous—was my sheer unconditional love for my inner divine or conscience. I could not do anything other than what my inner conscience told me, even if it meant the death of all that I thought I was—body, mind, and ego.

The final change
In Feb 2008, in one such situation, on a full moon night, I saw my own dead body, decked up very beautifully, lying on the marble floor. I asked myself, “Who is lying there?” And there came a spontaneous correction to the question as “What is it?” in place of “Who is it?”! A spontaneous answer too came: “This is food for worms”!

On July 18, 2008, around 7.30 in the evening, after an early dinner as usual, the children were studying. Destiny put forth a tough moment but it was less intense than many that I had already faced before. I simply got up and went into my bedroom and sat on the bed with folded legs, back straight. The children sensed that I was unsettled and did not disturb me. The lights in the room were off, and the door, ninety per cent closed. My attention went to a spot slightly towards the right side and a bit lower to the centre of the chest region and a single thought prevailed there: “I am this one here with no name and form (Atma).” At that very moment, the only vasana in me which was attachment, dropped naturally and instantly. It just happened that the last remnants of the mind were thrown off totally from me, and then, there spread stillness. From that effortless stillness, which happened on its own, arose a blissful state. I felt an unbearable joy, experienced never before, then felt as if I was weightless and floating. I could not feel the presence of my body; a limitless expanse happened. I don’t know for how long I was lost in that state. Peace was never disturbed thereafter!

The first thought that came to me after I came out of that thoughtless state was “Oh! The whole world is in grief for no reason. If this simple secret is shared with all, everyone can come out of grief and be blissful.”

The other thing observed was that there were no questions in me. It was a question-less state—as though everything could be seen through a crystal-clear glass. From then on, there has been an all-liberated state. Nothing ever touches the Self. Life totally changed, though nothing changed outwardly! But there was also a miraculously remarkable change at the body level. There were many physical ailments which were being suffered by me for ten years without a cure or a solution, despite varied medical help. All of them magically disappeared instantaneously, never to appear again.

From the moment of transformation, life is naturally spontaneous. The mind no longer exists; it vanishes forever. Life after this permanent transformation is like the head piece of a stadiometer (the instrument used to measure human height) which can go up and down to any height. This sahaja (natural state) pervades all the levels of the no mind (samadhi), all the levels of the pure mind (this is also no mind) for interactive purposes, and also beyond both the pure mind and no mind (turiyathita).

The life before transformation too is very significant as it is instrumental in the transformation. This can be explained with the example of acid-base titration experiments conducted in chemistry classes in school. The drops from the burette fall into the beaker, ultimately changing the colour of the solution. Though it is the last drop that changes the colour, are not all the earlier drops contributing to the change? The last drop cannot change the colour if the previous drops had not gone into the beaker. All the drops but the last one can be compared to man’s efforts, and the last drop, to Divine grace.